Finding appreciation for an underrated classic. 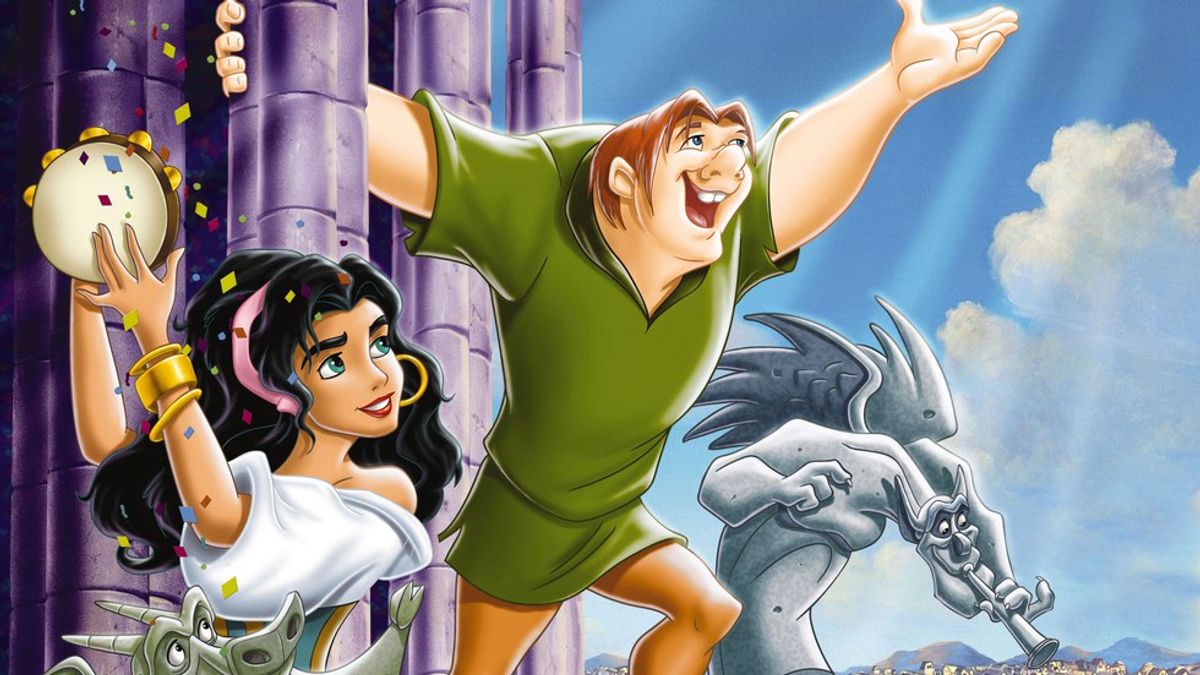 This year marks the twentieth anniversary for what I consider to be one of the most under-rated and under-appreciated Disney movies ever: “The Hunchback of Notre Dame.” Critics and movie-goers just weren't ready for the type of movie this was. It was a bit of a change from Disney's normal routine. Whenever you hear people talk about their favorite Disney movies it's always, “I just love Aladdin!” or “The Lion King reigns supreme!” or “Beauty and the Beast will always be the perfect Disney movie!” Well, it is my hope to garner some much needed appreciation for one Disney's “ugly ducklings.” That said, here are five reasons why you should love “The Hunchback of Notre Dame.”

1. It went in a newer, slightly darker direction.

One thing I always appreciate about film-makers and studios is when they have the guts to try something new instead of always rehashing what has worked in the past. “Hunchback” came during a period known as the Disney Renaissance, which spans from 1989's “The Little Mermaid” to 1999's “Tarzan.” It was during this period that the Disney Studios experienced a surge in their creativity, producing box-office-smashing hits. Many of these were princess/love stories. “The Little Mermaid,” “Beauty and the Beast” and “Pocahontas” are all terrific movies, but they are very much alike in structure and story.

According to Stephen Robello's book "The Art of The Hunchback of Notre Dame," the idea to make a film version of Victor Hugo's classic novel came from development executive David Stainton in 1993. Over the next three years, Disney developed a film that was true to the original feeling and style of the novel, while still keeping it pretty much kid friendly. But even though it was kid-friendly, it was definitely darker than Disney's usual animated romp. Instead of the lead character being a dashing hero, he is a deformed man who pines for a woman from afar. He is constantly told from his “master” Frollo that he is ugly and useless. We also see sin (particularly lust) as a huge theme. That's right, lust. In a kid's movie. Judge Frollo tries to rid the city of Paris of all the gypsies, but when he meets Esmeralda he burns with lust (almost literally in the song “Hellfire”). The biggest detour away from the Disney norm is...(spoiler alert) our hero Quasimodo does not wind up with the girl he loves! Instead, he has to watch while she falls in love with someone else and breaks Quasi's heart in the process! Better learn these lessons fast kids. Life is tough. Deal with it.

Tom Hulce, in my opinion, is one of the best actors ever to be put on film. Best known for roles in “Amadeus” and “National Lampoon's Animal House,” Hulce plays the titular character of Quasimodo. Interestingly, Hulce was not the first choice for the voice of our favorite hunchback. Originally, Disney was looking at Mandy Patinkin (best known as Inigo Montoya in “The Princess Bride”), but the actor's style clashed with what the studio wanted. Hulce then auditioned, and was immediately hired. It seems like a no-brainer to me. Tom Hulce does the character of Quasimodo such justice. In Quasimodo we have this gruff and disfigured exterior, but when we hear him speak we hear a gentle soul longing for friendship and love. Hulce's voice perfectly captures that essence. I particularly love when Hulce sings the songs “Out There” and “Heaven's Light.” To be honest, Hulce doesn't have what I'd call the best singing voice in the world, but the quality of it matches the character. There's a small bit of naivete, yet there is the sense of an old soul and a big heart which holds a lot of genuine kindness. Hulce really brings this character to life, and makes him a distinctly unique and wonderful part of Disney's saga.

When it comes to Disney, no one does better songs or musical scores than Alan Menken. The man is a legend, having co-written the critically acclaimed music for “The Little Mermaid,” “Beauty and the Beast,” “Aladdin,” “Pocahontas,” “Hercules” and “Tangled.” The music of “Hunchback” is just as memorable as Menken's other works. “The Bells of Notre Dame” is an epic prologue song that sends chills up the spine. “Topsy Turvy” is one of those songs that easily gets stuck in your head. Musically, for me, the highlight of the film is “Heaven's Light/Hellfire” which perfectly shows the viewer a glimpse of the souls of Quasimodo and Frollo. The song starts out light and soft with Quasimodo singing about his hope for love. It's a moment that really tugs at the heartstrings. We then segue-way into Frollo's song where he boasts about his “righteousness,” but being afraid of the lust he feels for Esmeralda. By the end of this haunting song, he shouts with fierceness that she will choose him or burn. The music is powerful. I will admit, I don't particularly care for the songs “God Help the Outcasts” and “A Guy Like You,” but the rest makes up for it. Really.


4. Perhaps the most sinister villain in Disney history


Frollo is perhaps the most sinister villain in any Disney movie. It helps that the character is portrayed by Tony Jay who is known for his chilling voice. Frollo is more than anything a vindictive religious hypocrite. This makes him all the more dangerous. He hates the “wickedness” of the gypsies and wants to eliminate them completely from his city. This proves to be quite a personal conflict when he experiences extreme lustful feelings for the gypsy Esmeralda (the same girl Quasimodo falls in love with). It is this lust that motivates him to take a more genocidal turn toward the gypsies. Another thing that makes him a great villain is his attitude toward Quasimodo. In the beginning of the film, we see Frollo kill Quasimodo's gypsy mother as she tries to flee from the authorities. Had it not been for the intervention of Notre Dame's arch-deacon, Frollo surely would have killed the infant Quasimodo because of his deformed appearance. As he raises Quasimodo, Frollo constantly reminds him that he is deformed, ugly and unacceptable in society. Seriously, what a scumbag! And then, just a side note, one thing he really has going for him is that he is very arrogant and smug. Personally, I have always found these to be the best qualities in a villain.

5. The artwork and animation is incredible!

incredible! They did the city of Paris, and particularly Notre Dame cathedral some real justice. From here I'll just let the screenshots speak for themselves.

So, those are the reasons why I think there is so much more to “The Hunchback of Notre Dame” than the majority thinks. It is finely crafted, and really one of Disney's better efforts. Hopefully, you'll gain a deeper appreciation for this film.