5 Reasons To Add 'Jessica Jones' To Your Netflix Queue Immediately

5 Reasons To Add 'Jessica Jones' To Your Netflix Queue Immediately 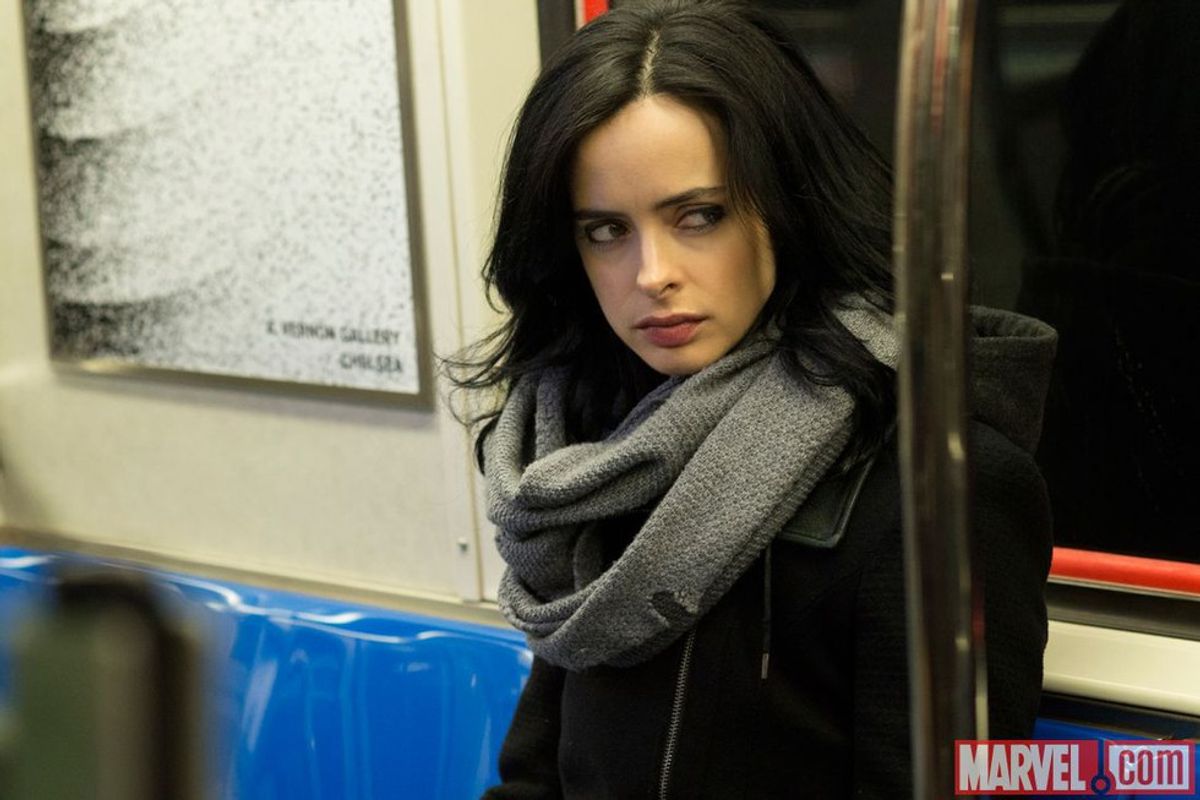 Confession: I'm a Netflix addict. If you're like me and you're constantly on the lookout for exciting new things to watch on the streaming platform, you've probably heard the name "Jessica Jones" by now. The show has been blowing up on both social media and websites/magazines to the surprise of no one who's seen it (I don't usually binge-watch, and I finished the 13 episodes in less than two days if that's an indication of anything). So, what's this TV show all about? Why should you watch it? Sit back and let me introduce you to quite possibly one of the best productions to come from Marvel.

First, "Jessica Jones" is based on, well, Jessica Jones. Created especially for Netflix like its forerunner "Daredevil," the show centers on Jessica Jones, a former superhero who opens her own detective agency after an end to her superhero career. The show is a nice go-between for "Daredevil" and "Agents of S.H.I.E.L.D.," with the dark undertones and violence of the first, and sarcasm and humorous moments featured prominently in "S.H.I.E.L.D." Marketed as a film noir, the show will appeal to those who like their superheroes a bit rough around the edges compared to most. Read on for reasons why you should watch the show, Marvel fan or not.

1. Jessica, and all of the other characters, is extremely relatable.

The characters. Oh, the characters. So good. We have Jessica, who is a drunk suffering from PTSD who doesn't think she's worthy of love; Trish, her best friend who had to go through hell at a young age because of her fame-obsessed mom; Luke, who Jessica meets and has an instant connection with, but not in a good way; and Malcolm, the junkie with a heart of gold and a tragic backstory that will probably make you sob some. This doesn't include some of the stellar secondary characters, but overall, the series portrays people you could know in real life. They're not good or bad, like common characters in other superhero movies and shows; they're all inherently flawed, making decisions that don't always turn out well, especially on Jessica's part.

2. Jessica and her best friend, Trish Walker, have one of the best female friendships on TV in awhile.

Seeing two women who actually act like best friends on TV is pretty rare -- oftentimes female friendships are portrayed as stiff and focused a bit too much on the men in their lives (ahem). But Jessica and Trish share a true bond. Without giving away too much, they've been estranged for almost a year at the beginning of the show, but still love each other just as fiercely. The end will also make you cry tears of friendship. Overall, the show just really shows the strength and importance of friendship -- no matter what happens to Jessica, she'll have Trish to support and ground her and vice versa.

3. The sarcasm is always on point.

Jessica's snippy remarks are one of her many coping mechanisms, on top of her distancing herself from others and her alcoholism. Once you realize why she says such comments, they're a bit more heartbreaking -- but still amazing. Some of her quips should go down in history, or at least be used in everyday conversation. We all need a little more sarcasm, right?

4. The show accurately -- and heartbreakingly -- portrays themes of trauma, rape, and addiction.

Many people have been praising how the show handles it's heavier themes, and I 100 percent agree. Jessica was brutally assaulted, both mentally and physically, and must live with what she's had to deal with -- and what she's had to do -- daily. She's broken and trying to put her pieces back together, but she knows she'll never be the person she once was. However, this is her strength -- she has her highs and her very, very low lows, but she makes it through them, just like we all do to live and survive. The show is able to show that how people deal with trauma is unique to each person and each case. Jessica isn't a poster child for the narrative of PTSD, but rather a character in her own story. A lengthier article that tackles this topic was written brilliantly at io9.

5. Kilgrave is quite possibly the scariest villain in the Marvel universe -- or of recent TV.

Seriously. Every moment he's onscreen, I shuddered. Instead of being the usual villain in a Marvel piece, a bit more cartoonish, more unrealistic, Kilgrave embodies the threat that many women face daily. Able to control minds since a young age, Kilgrave is able to coerce Jessica, and anyone else, into doing his every whim. In his twisted mind, though, he thinks that Jessica actually loves him, and he completely invalidates her feelings -- when she angrily expresses them -- about what he forced her to do. While women don't deal with mind control every day, the other threat Kilgrave imposes -- rape -- is very much a fear. With Kilgrave, Marvel, and the showrunners have created a far more personal villain that is a bit too close to many's fears for comfort

So, next time you're on Netflix and aren't sure what to watch next, try out "Jessica Jones." I promise you won't be disappointed, whether you're a Marvel geek, a fan of awesome, feminist-y media or you're just really into the grittier, deeper TV shows.