It's been quite a ride with these castaways! 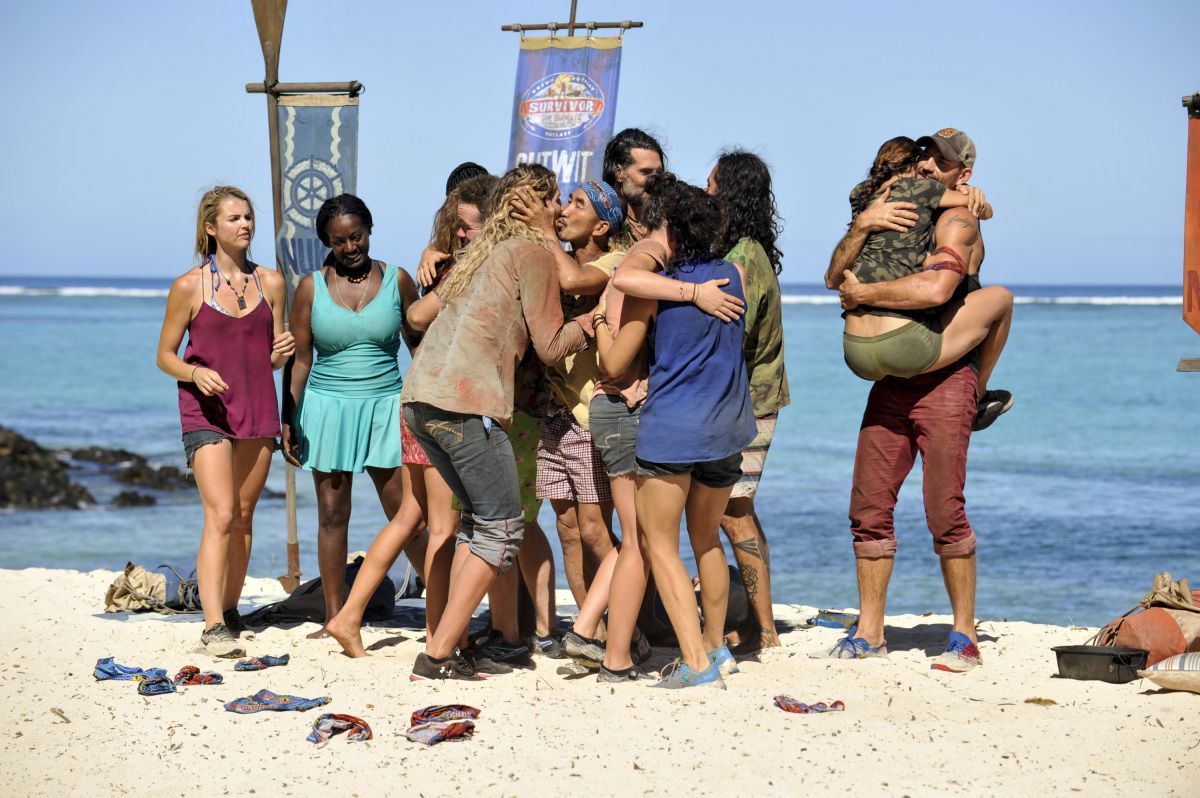 Survivor: Game Changers has been in full swing, and it has been better than I predicted. The season so far has been a nice balance of game strategy with character moments, and I feel like there are people that I can solidly root for, unlike most seasons. This past episode we had the famous family visit, where castaways' family members come to visit for reward. These are always my favorite episodes, for they give the constantly strategizing people emotions and we get to know a lot more about them and what's truly underneath the mask. We're now at the Final 8, and with only two episodes left, it's currently a race to the finish. Here are my thoughts of the remaining castaways in alphabetical order!

Andrea has had quite the ride this season. After her constant war with Zeke post-merge, she was able to come out on top and be a rising force in her alliance. She just narrowly avoided being voted out last week instead of Sierra. She has been very active in the strategic part of the game after being very quiet early on, but people know she is a big threat after her immunity wins, so she needs to be careful. I really enjoyed her story about her sister and that really made me feel for her. I honestly hope she keeps going because I know her sister is looking after her on the island.

Oh Aubry. Quite the turnaround from her Kaoh Rong experience. She has been on the bottom this entire game with all of her allies on original Mana getting voted out one by one. She has been stifled for a while, so maybe that is the reason we are not hearing from her. Since the merge, she's finally found her footing with Cirie, Andrea, and Sarah. Hopefully, she'll be able to have a breakout episode before it's too late.

Or Culpepper as Jeff continuously LOVES calling him. Brad has been interesting this season. Previously known as the presumed sexist of Blood vs. Water, we've seen a different kind of Brad this season, one who loves his wife Monica and one who wants to make it far for his family. While he has said some concerning things about Michaela for no real reason, his comments haven't been that egregious as last time. With a crucial immunity win and now in the minority since Sierra's departure, Brad looks like in a tough spot. However, his two allies (Tai/Troyzan) both have idols, so there is still hope. I honestly see him making it far only because who would vote for him to win?

CIRIE! I love Cirie everytime she comes onto Survivor and this season is no exception. She's been an absolute delight. Since being target #1 on her original Nuku tribe, she was immune the entire pre-merge and didn't go to to tribal until the merge. She has made an alliance with Andrea and others, and has somehow hid in the background and making others targets before her. Her scene with Michaela about their bonding as two black women was extremely touching as well. We've seen her highs and lows, particularly her struggle at a reward challenge that she was able to overcome. I loved seeing her and her son at the family visit and how he is as much of fish out of water as Cirie is. Cirie is always a bundle of energy, and I can't help smile that she is on my television for the fourth time.

I am so happy Michaela has made it this far! After being blindsided before the merge in her previous season, getting to see her for a longer period of time has been so fun. While some of the cast may find her annoying or aggravating for just existing, she is the fire that keeps on burning. From her sipping water when JT left to eating coconut when Debbie left, her antics have always kept me laughing. She's had great taste in allies like Sandra and Cirie, and she's managed to make it to Final 8 despite being ostracized at the merge. This past episode was a big one for her, with her and her mom Candy being an amusing duo, as well as her being the swing vote between two alliances. Her and Tai make a great new duo and I hope getting rid of Sierra was the right move. I fear that she may be expendable as a strong woman, but if she can find her niche, she'd be exciting to see in the finale.

There's so many strong women left, I love it! Sarah has been a driving force this season and has definitely improved from her past season. She has wanted to play like a criminal, and Officer Sarah has done just that. Currently holding two advantages, she has been able to flip from alliance to alliance to make sure she is in the best position possible. Her social game has been impeccable as Sierra, Andrea, Aubry, Michaela, and Cirie all trust her and think she is their best friend. Nobody has really brought up her name, and I see that as a continuous thing as there are still bigger fish to fry. I wouldn't be surprised if she makes it to the endgame. For character moments, her crying for her husband was touching, and the moments where she supported Cirie at the challenge as well as Zeke after his outing were extremely heartfelt. She just needs to keep going her pace and we'll see if she can make it.

The guy with all the power and nobody knows it! Tai has been in the center of strategy once again, being the previous swing vote with Michaela after his previous alliance burned his last tribal. Tai is on nobody's radars, and that's a problem moving forward because he has two idols that can be very effective moving forward as the numbers dwindle. His social game has been very meh, especially at Sandra's tribal council where she exposed that he wanted Ozzy out. He's very spastic, and that can be troubling if you're his ally. Nevertheless, I love the dude and he's always a sweet presence where he means well. The Family visit was touching with him and his partner Mark. At first I thought he meant Mark the Chicken from his last season, which would have been just as great. I see Tai making it forward but being out right before the finals.

Lol who? But seriously...who is Troyzan? After being such a loud presence in One World, we have barely seen him speak this season, especially recently. He was tight with Sandra originally, and then was swapped to a tribe where he was by himself socially. He was able to find an idol at the challenge...but that's really been it. He's in the minority after being in an alliance with Sierra and Brad, and I feel like he is the perfect goat to take to the end because he hasn't really done much. We'll see what happens soon, but there's not much to go on and he is really getting shafted in the edit probably because his game doesn't really matter in the long run.

Overall, this season has definitely been more engaging than recent ones, and I'm definitely pleased. Here's to hoping these last two episodes really cement Game Changers as a game changing season!