"Falling Down": Everyone Has Their Breaking Point

"Falling Down": Everyone Has Their Breaking Point

"Feels good to exercise your rights doesn't it?" 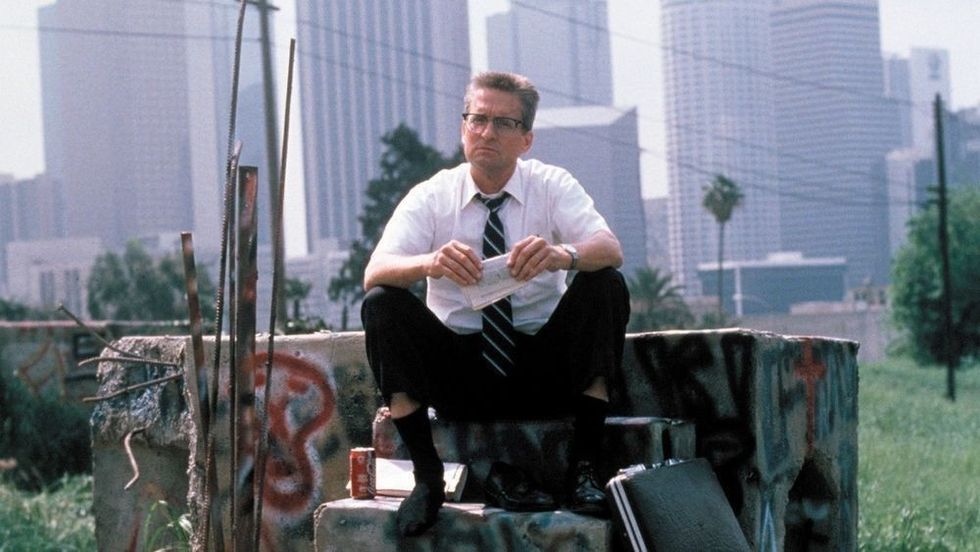 Whether it's a bad day at work, an argument with a spouse, a constant tormentor at school, overpriced gas, or having a desired parking space taken, we've all had that one day where we just can't take it anymore and would want nothing more than to snap and take that frustration out on the whole world. In the summer of 1993, director, Joel Schumacher and writer, Ebbe Roe Smith brought that feeling to the screen with their tragedy tale "Falling Down".

Considered by Michael Douglas himself to be his favorite role of the hundreds he's been attached with, William Foster a.k.a. D- Fens is a mild mannered man recently divorced from his wife Beth ( Barbara Hershey), unemployed, and now living with his mother ( Lois Foster). Not the life any middle aged man wants to be living. So as forecast, William snaps. From then on, Foster leaves his substandard car and life in the middle of jam packed traffic before heading out, armed with only a briefcase, on a path of no return in the fabled streets of L.A.

With "Falling Down", Schumacher and Smith depict the transformation of the average mild mannered Foster into a hardened criminal. But then slowly, as the film continues the darkness begins to unravel where Foster is revealed to have some very serious psychological issues. The audience in a way are rooting for a mentally ill individual, who may or may not be justified in his actions.

One of my favorite sequences of the film is the conversation between William and the white supremacist Nick ( Frederic Forrest) in the latter's army shop with Nick proclaiming that the two of them are the same in a sense. However, Foster and the audience know in fact that they share major differences in ideologies, however both are extreme in their behavior. It's two sides of evil, one still retaining some form of a moral code and one long without any code.

In a way it's almost endearing to see this mild mannered man begin this one man war on the established order that has wronged him for many years. However, then Foster will then commits acts that make you turn around and wonder if you're truly rooting for the right person. The first true crime Foster commits in the film starts with D-Fens trashing the Korean grocery store over the price of a can of soda which escalates even further. Later, when Foster defends himself against members of a gang, he holds up a burger joint that won't let him buy breakfast, and takes his own family hostage toward the end.

It's fitting that the production of "Falling Down" took place concurrently with the infamous L.A. riots of 1992, which also revolve around individuals refusing to stand for the way things are going and rallying against the established order. The horrific beating and arrest of construction worker, Rodney King, was the breaking point that would ultimately lead to the riots.

There are many intentional references of war scattered throughout this film from William's buzz cut choice of hair, his past employment with missile defense, the conversation with the needy homeless man, and Nick's military store. Though it's not stated explicitly for the audience, I can only infer from the clues given that Foster is likely a Vietnam War veteran suffering from some form of PTSD. This is reinforced even further when Foster ditches his classic white button down and tie in favor of white power Nick's army jacket. Foster is in a sense, stripping away that identity completely and embracing the mindset of a man at war... with everyone else. D-Fen's come this far, why go back now?

"Falling Down" remains a relevant and honest examination of strained working class members of society and the lengths that people can go to get even with society.

Madison Franz
The Narrative
1120461
Photo by Brooke Cagle on Unsplash

Madison Franz
The Narrative
655711
Photo by Manny Moreno on Unsplash