Fall Out Of Fear
Odyssey

Fall Out Of Fear

Fear doesn't always work against you- sometimes, it’s the force that pushes you forward. 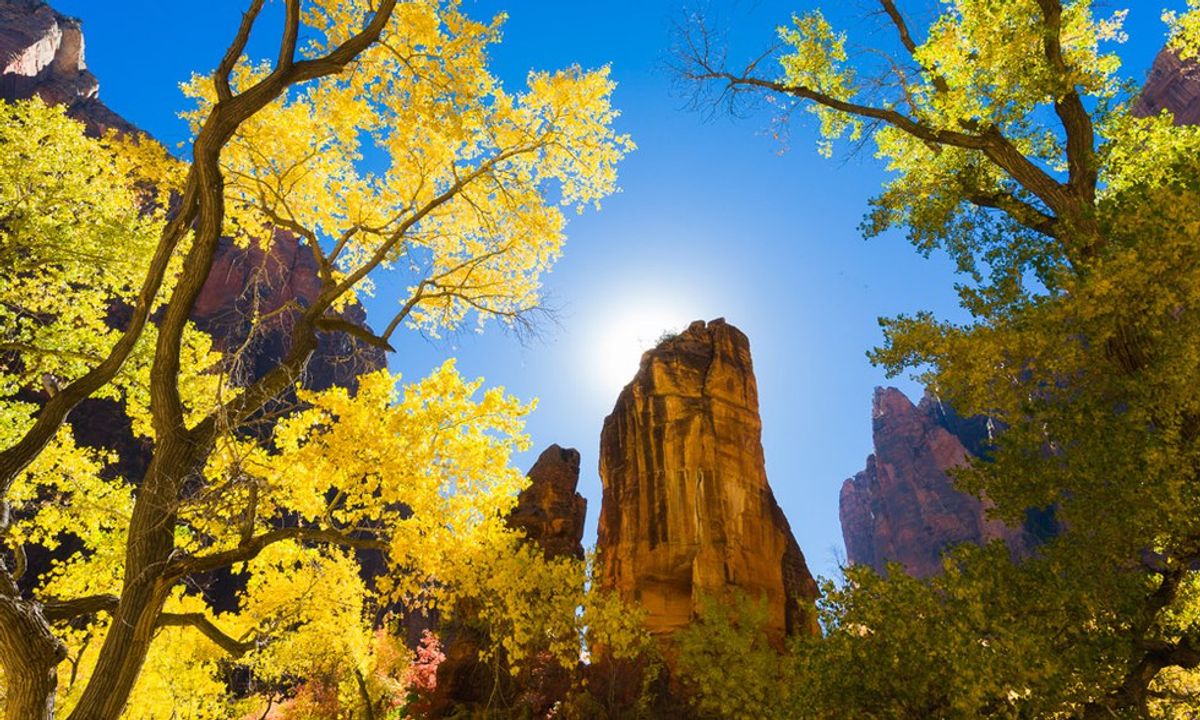 Being that I live in a city that actually has fall colors now, it seems as if that’s all I’ve heard people talk about for the last few weeks. Everyone is so excited to get out and see the leaves dropping off of trees, hear the crisping of leaves as we run through the piles, embracing our childhood selves for a moment, and of course, to see the vibrant displays of green, orange, red, and yellow leaves- the fall colors.

Every time I hear someone talk about going out to see the fall colors, I can’t help but think back to last year when I saw fall colors for the first time. I remember being so amazed, so breathless, so in love, and so full of fear.

The first time I saw a true display of fall colors was November 13th of last year in Zion National Park. I had lived roughly three hours away from this national park for 19 years, but never visited there until I took a field trip with my Meteorology class- a field trip that I’ll never forget.

When we first stepped out of our cars, I didn’t know what to say. I was freezing, tired, excited, and blown away by the natural beauty all around me. I had never seen a more extraordinary sight, and frankly, never thought that I would.

After walking around the park for a bit and taking in all of the dramatic scenery, we started hiking Angel’s Landing. At first, I loved it- I was with great friends, I was meeting new people, I was learning about the physical geography and the weather patterns around me, and I was being physically challenged. The hike was a bit steep in some parts, but nothing too extreme.

When we reached the two mile mark, called Scout’s Lookout, we were treated to beautiful views- there were hundreds of trees surrounding us with crisp, green/yellow leaves, sharp, jagged canyons on both sides of us, and widely contrasting reds, light browns, grays, and dark browns shining on the mountains. I was thrilled with being treated to such beauty and was happy that I had made it to the top.

Except, that wasn’t the top. Once we reached Scout’s Lookout, my professor told us that there is another half-mile to go, but he said that we don’t have to do it if we don’t want to. He said that it is a little scary. I have had my professor for a year now and have never heard him say that we could stop a hike early, let alone saying something is scary, so I was pretty terrified, to say the least.

For some reason, though, the curiosity in me was too strong for me to fight against. When it was time for the daredevils to continue on, I tagged along, shaking with every step.

I have never been more scared than I was as I climbed Angel’s Landing. There were several moments on that trail when my heart literally dropped and I questioned why I had chosen to live on the edge- both literally and figuratively. The path was only a couple feet wide, there were thousand foot drop-offs on both sides, a lot of rock scrambling, and chains for you to hold onto so you don’t fall. I don’t know what scared me most- it all did.

When I took that final step and reached the platform, though, my goodness- I felt accomplished, but even more so, I was speechless. I didn’t know what to say or do- everywhere I looked from there, the view was just incredible and unlike anything I’ve ever seen.

I’ve always had a fear of heights that has been strong enough to make me turn back from some experiences, but I refused to turn around this time. In retrospect, the trail itself was physically easy, but it was mentally and emotionally straining. I had never felt so scared, but climbing Angel’s Landing was a huge self-realization.

I was proud that I managed to climb this trail and go against my fear for a change, but even more so, I was inspired and felt like I could perhaps do this to ease more of my fears. My fear of heights has kept me buckled down for years on end, but on Friday the 13th, I was brave enough to break out of this seatbelt.

If there’s anything I learned from Angel’s Landing, it’s that fear isn’t always against you- sometimes, it’s the force that pushes you to take one step, followed by another, and so on. Now, it’d be unrealistic to think that we could just stand up to all of our fears at once, but perhaps during this Fall season, you can fall out of fear from something that’s holding you back. I can speak from experience when I say that it’ll be scary, but I can also promise you that it’ll be worth it- every aching step, shaking nerve, loud cry, or whispered word.