Evolution vs. Creationism In The Classroom

(And why creationism isn't) 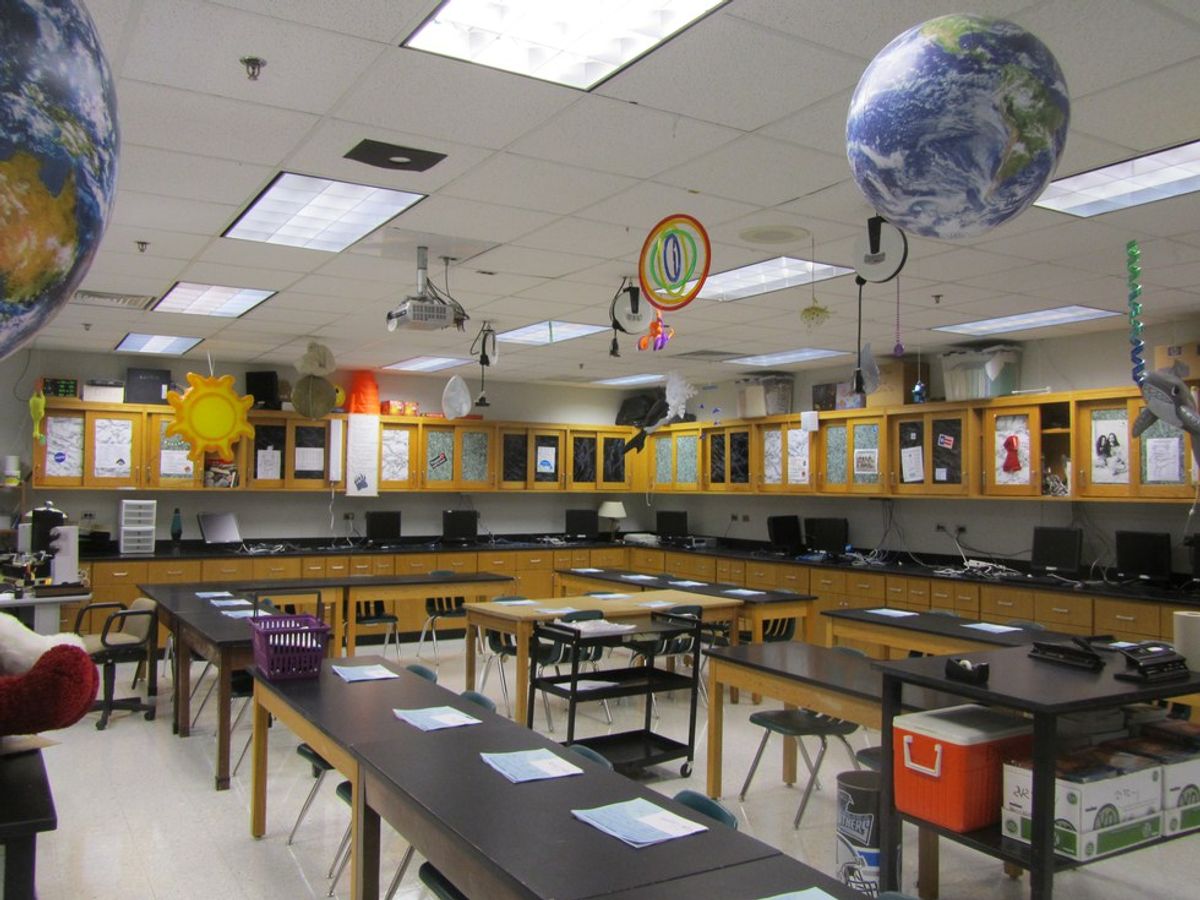 The Cornerstone for Teachers

To many high school students across the country, evolution is just another boring chapter in an already boring biology textbook. However, it has not always been that way. Ever since the birth of evolutionary theory, creationists and evolutionists have butted heads. In fact, as difficult as it is to imagine, teaching evolution used to be illegal in an abundance of states. Today, the tables have turned. The controversy now centers around whether or not creationism should be taught in school science classrooms. Using the Constitution, scientific reasoning, and the opinions of the American people, it is clear that the answer is no.

First, creationism has no place in science class because the Constitution designates the separation of church and state. Many creationists refute this by asserting that its teaching is protected under freedom of religion, academic freedom, and freedom of speech. Essentially, this argument attempts to pit the American public against the scientific community by suggesting that science is violating creationists’ First Amendment rights. Epperson v. Arkansas (1968), on the other hand, made it very clear that religion cannot be taught in schools--even if simply by the omission of evolution. And religion is not science because “While we can readily see that the physical world exists, is there any tangible evidence that a moral/ethical/spiritual world also exists?” (Singham). Randy Moore, a biology professor at the University of Minnesota, found that a mere 26% of college students agree that the Genesis story of creation has a valid scientific basis. Therefore, as evidenced by Moore’s study, most people know that creationism is not based in fact. Science, on the other hand, is. Furthermore, in 1995 over thirty religious and nonreligious organizations signed a joint statement saying that only scientific evidence “for or against any explanation of life may be taught” (DeWolf and Cooper). Despite that, 57% of students still believe that creationism should be taught in science classes even though there is no scientific proof to back the theory. There is a way, however, to appease the creationists who insist that the scientific community is suppressing their rights. Creationism, along with other Christian doctrines, can be taught in theology classes where many religions--and genesis stories alike--are studied.

Additionally, creationism cannot be taught alongside evolution both because of the legal aspect and for the sake of clarity. After Epperson v. Arkansas, some schools attempted to teach both sides of the coin under the guise of fairness and as an alternative to evolution which kids could opt into. In reality, it was just another way to continue to include religion in the discussion. In Edwards v. Aguillard (1987), the Supreme Court struck these policies down precisely because of their religious overtones (Clausen). But despite it being against the law, according to Moore roughly 15-30% of biology teachers in public schools continue to teach creationism. He suggests that this coincides with the public’s desire for creationism. However, as if to reinforce its illegality, some of these teachers have promptly been slapped with lawsuits. All of them, to the chagrin of the creationists, have been lost to evolutionists. Furthermore, teaching both theories in classrooms presents another unique concern besides its legality. Mano Singham, a physics professor at Case Western University, puts it this way: “Religion and science are separate and mutually exclusive realms of human thought whose presentation in the same context leads to misunderstanding of both scientific theory and religious belief.” In other words, which theory are young students supposed to subscribe to when schools are teaching them that both are correct? Overall, the State has made it abundantly clear that religion, regardless of the context in which it is framed, has no place in a school setting.

Because the Kansas Board of Education was not allowed to have creationism in its curriculum, it decided--rather unpopularly--to remove evolution theory from its science standards completely. After a nationwide debate, new members were elected the very next year and the standards were revised to re-include it (Hoff). The argument for the omission of both is that both are unproven theories and therefore “simple fairness requires either teaching or omitting both from the school science curriculum” (Singham). The problem is that there is abundant scientific evidence supporting evolution and nothing for creationism.

Realizing this, some creationists have started to focus on isolating flaws in evolution instead which many scientists simply see as a way to circle back around to creationism. Philip Johnson, author of Darwin on Trial, insists that evolution theory does not stand up to logical and evidentiary scrutiny. He says that “the evidence is sparse for the existence of intermediate forms of life, and the rate at which micro mutations can occur is not rapid enough to explain the current diversity in life forms” (Singham). Because of these perceived shortcomings of evolution, creationists argue that schools should be able to introduce a secondary explanation as they see fit (Hoff). However, these arguments employ incorrect information. According to scientists, the problem is not that there are gaps in the fossil record. It is quite the opposite, actually. In reality there is a plethora of transitional forms that simply “defy convenient pigeonholing” (Val Giddings). But that does not mean that evolution did not occur. Scientists across all disciplines agree that evolution took place; it is simply some of the mechanisms that remain in question. On the other hand, most scientists have not accepted creationism as a valid scientific explanation of the origin of human life. Additionally, many evolutionists agree that teaching the faulty criticisms of evolution are “repackaged attempts to introduce religious concepts into science lessons by falsely implying [that] evolutionary theory is riddled with doubt” (Cavanagh). As a result, because the scientific evidence for evolution is sound, criticisms of the theory should not be tolerated in classrooms.

Finally, evolution should not scare creationists because, contrary to what many of them seem to wholeheartedly endorse, evolution does not destroy God. A 2010 Gallup poll found that 40% of Americans believe in creationism (Clausen). Because it is so widely believed, creationists argue, it should be taught in schools. However, these statistics can also be turned against creationists. When the results from the 2010 poll as well as a similar Gallup poll in 1982 are compared, it is clear that the gap between the belief in creationism and evolution is widening with creationism falling behind. According to Randy Moore and Sehoya Cotner who is an associate professor of biology under Moore, only about 12% of people completely disagree with evolution theory. The vast majority of people agree with some form of evolution whether it be guided by God or completely secular. Furthermore, surveys in 1996 and 1998 revealed that 40% of scientists believe in a God that communicates directly with man. This number has remained the same since similar surveys in 1914 (Singham). This shows that despite teachers teaching evolution in science classrooms, the majority of people still believe in God. This should assuage creationists’ fears that evolution kills religion.

Overall, it is very clear why creationism should not be taught in science classrooms. Using the separation of church and state and theology classes as a basis, claims of rights’ violations have proven to be unsubstantiated. Furthermore, scientific fact and logical reasoning have shown that, contrary to evolution, creationism is not science and therefore should not be taught in science class. Finally, the opinions of the American people have thoroughly demonstrated that evolution does not equate to an atheist society.

Nicole Marie Nigro
Individual Creator
7451
c1.staticflickr.com
Where to start...... Let me start with the cliche that life throws us curveballs and what we do with it is what counts.