The heavy censorship and communcations laws that jeopardize Ecuador's freedom of speech. 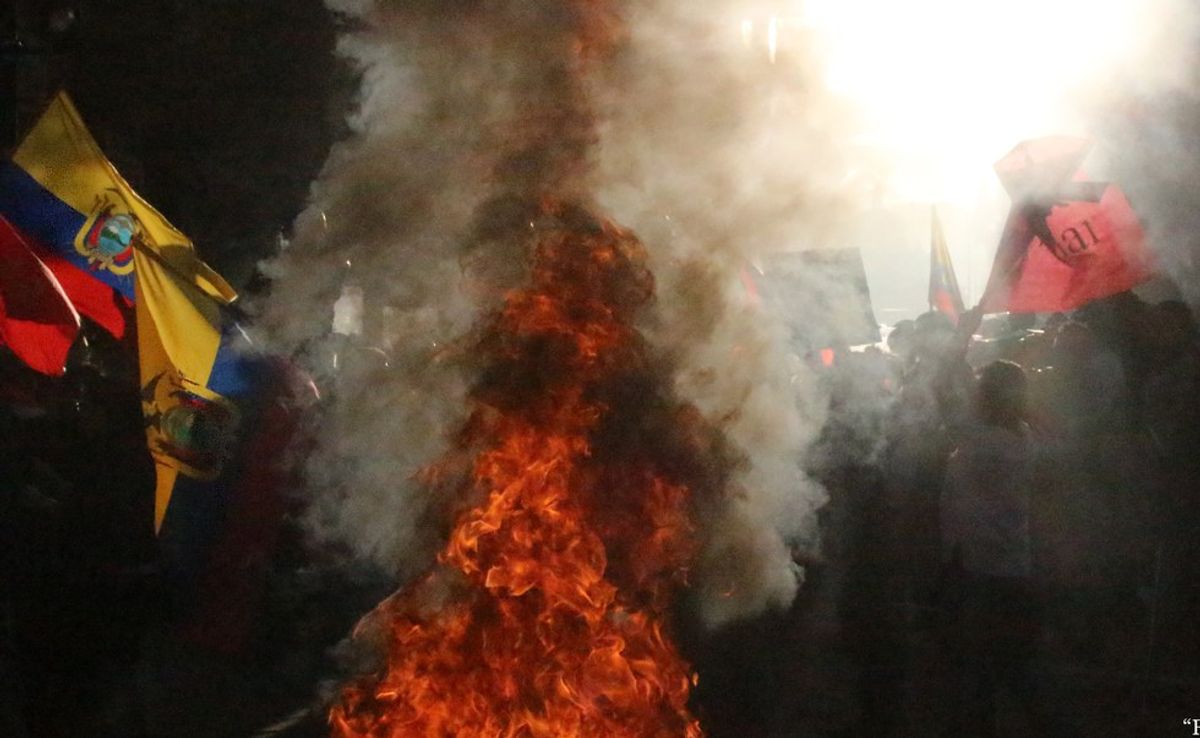 But throughout his time in office, President Correa has implemented a set of laws targeting the country’s communication acts and challenging the ways Ecuadorian Journalist can talk about the government and its leader President Correa.

Back on 2011 reporters of “El Universo” Carlos Pérez, César Pérez, Nicolás Pérez- and ex editor Emilio Palacio were sentenced to 3 years in prison plus a fine of $10 million dollars, all due to their apparent misleading coverage of the Ecuadorian President Rafael Correa during a tense police revolt back in 2010.

A set of laws created by President Correa that go by the name of "Ley Organica De Comunicaciones" have sparked controversy due to their power to limit freedom of speech in Ecuador. As stated in Article 26 of the “Ley Orgánica de Comunicaciones”

Translation: “dissemination of information , directly or through third parties is prohibited , whether produced in concert and published repetitively through one or more media for the purpose of discrediting a natural or legal person or reduce its public credibility. The Superintendency of Information and Communication may have upon the rating of the relevance of the claim, the following administrative measures.”

Article 26 in fact protects the values and interests of important figures inside the Ecuadorian GOV as they cannot be accused by any Ecuadorian media due to the media’s fear of repercussion. As witness with the case of “El Universo” and the multimillion dollar fine, following up to this case Article 20 was implemented to further target and subjugate journalist who have to pledge responsibility for the content they create.

"Art. 20.- further Responsibility Media
comunicación.- There will be room for further responsibility
the media, in the administrative,
civil and criminal when broadcasting content are
expressly assumed by the middle or not of
explicitly attributed to another person.
Comments made at the foot of publications
electronic on the websites of media
communication will be legally constituted
personal responsibility of those who made unless
means omitted meet one of the following:
Design and implement self-regulatory mechanisms
to avoid publication, and allow the complaint and
removal of content that adversely affects the rights
enshrined in the Constitution and the law.
The media can only play
social networking messages when the issuer of such
message is properly identified; If means
communication does not fulfill this obligation, will have the
same responsibility for the content established
published on its website that are not already assigned
explicitly to another person."

In addition the President has relied in using propaganda to improve his images towards the Ecuadorian people and stages weekly reports often around the poorest regions of the country, which he acknowledges are the main contributors to his campaign. While addressing national issues, the President is well known to use these opportunities to criticize anyone who opposes him and his campaign. Similar tactics used by United Socialist Party of Venezuela leader Nicolas Maduro.

Mentioned as “one of Latin America’s most sensitive presidents” by The Huffington Post. President Rafael Correa earned a reputation for being in constant twitter wars with anyone he dislikes, this includes a teenager of the age of 18 who mocked and threatened the President through Twitter and later got called out by the president himself during Correa’s weekly report according to multiple sources. Comedian and talk show host John Oliver replied to the odd case between the president and internet trolls by roasting the President himself and saying,

“Oh, 18, so young, so immature — unlike me the 51-year-old head of state who is currently attacking him in public,” Oliver said of Correa. “To be fair to him, that 18-year-old had expressed a hope that Correa would die, but Correa should have people that take care of that sort of thing for him, rather than spending — like he did — nearly 15 minutes calling out online trolls.”

The sensitivity that surrounds President Correa has indicated why the country’s communications law is in place. To fine newspapers, censor self-editors and have the leverage to sue any journalist who the president sees as a threat to his integrity.