I Don't Want This Phone Anymore

"If you spend your whole life listening and watching other people's stories, when will you ever have the attention span to create your own?" 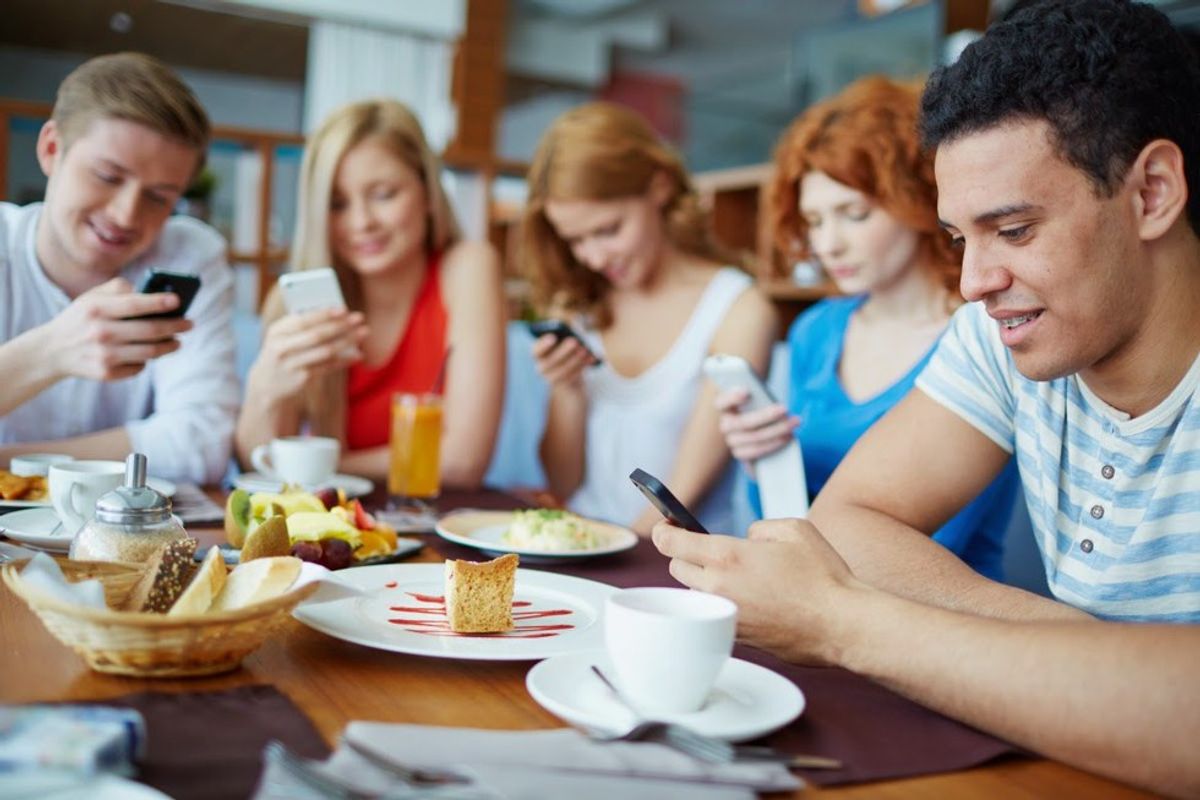 I do not want this phone anymore.

I have a Galaxy Note 5. Ever since the Iphone came out and my sister got one, I vowed to never repeat her same mistake. It wasn't the average sister-rivalry, not that we ever had that, I just witnessed the slow way it consumed her. I thought perhaps it was her growing up, distance had started to expanded between us. It was not all that big but big enough for me to notice. I think it's gotten past the point where one would call this an overreaction because ever since then, it happened again and again with more people I know as the Iphone became more popular. It's not just the Iphone either, it's smart phones and all that comes with them, the social media bullshit mostly.

It's a scene too familiar to all of us, standing in a group of people then looking up to see that everyone around you is looking down. It makes me sick, honestly. It isn't that I spend a significant amount of time on my phone, but when I do, then I pull myself away, the world around me looks and feels different. Sometimes, recently, I look up and the real world look more like the virtual one, and the virtual one looks more real. I have yet to own an Iphone because I have watched so many people I know become part of their's. When they get it, it's all pictures and videos, social media and trending. It's probably one of the most frightening addiction of this generation, because it is silence and socially accepted. It's a disease we all have, maybe that's why it's accepted.

One summer, I got a tiny, little TracFone. I had no social media, likely to the fact that I was ten years old and Facebook was still rolling downhill, picking up speed. It was the year my sister got her Iphone and my bitter resentment of it caused me to ask my mother for a phone opposing everything that the Iphone was. It took my sister's attention and every fiber of my being wanted revenge in the form of boycott. It was also an experiment, I suppose, much like a lot of things in my life. At this young age, I was already curious as to who cared enough to call, to legitimately talk to me like a person. I didn't care to be caught up in the attention and instant gratification of having everything and everyone's opinions at my fingertips at all times. In recollection, I see that summer as a liberating time (even if I didn't fully appreciate it then,) because I went into the next year of school completely detached and indifferent to the comments of others. My life was not yet on display.

I found my first phone recently, and charged it up for a quick dose of nostalgia. I found terribly taken photos, terribly taken probably because they were taken only for me and my viewing, no one else's. I found that I want to take pictures on a shitty camera, with their blurriness accurately depicting reality. I miss the times where I didn't care who texted me, who liked a photo. God, the scene of aesthetics we create for the people we want to impress is not reality. Maybe that's why I don't recognize it when I see it anymore. I want to see some normal, ugly, boring Tuesday mornings where I wake up, stretch, and walk past my phone. I want to not hesitate to leave the house without it as I walk into that Tuesday morning in yucky, late January. I don't want to have this need to be constantly entertained.

We sit there on Instagram, Facebook, Twitter, Pinterest, or whatever they will toss at us next, toss at us like hyenas starving for attention or distraction. We sit there, some people for hours a day, and do nothing! Imagine if you walked into your house and saw your brother staring at the wall. Imagine asking him how long he'd been there and him saying "a couple hours" nonchalantly. You would think he's crazy! There is barely a difference. Why is it crazier to sit in the stillness of your our mind than to stare at a screen with pretty moving colors? Are we afraid that we cannot handle just existing for once? Am I?

We liked pictures and videos of people doing amazing things, thinking we are being inspired, but truthfully, we are still just sitting there. Immobile and rotting. It came to the point where I was like "Mindy, if you spend your whole life listening and watching other people's stories, when will you ever have the attention span to create your own?"

I don't want this phone anymore, I want my silly little TracPhone that was always just enough to get by. I'm still curious as to who would care enough to call me, to ask me about how my life is going, when there are no pictures to keep them updated. I don't want a Facebook, or an Instagram, or a Snapchat anymore, but it feels like I can't get free. I'm bound by contract to keep this phone for two more years. The saddest fact of them all is that I don't know if anyone would call, because people don't really know how to do that anymore. Most people my age are too far gone, lost with no care to be found. I don't know if I'm there yet, at the level where I see some people, and I cannot tell if that is a good or a bad thing because most people like that don't even know they are.

There are some good features too though, right? There must be. It's a great way of connecting to new people and staying connected to family and friends. My issue with this is that if they aren't willing to keep up with you directly, are they actually worth it? Probably not. Vise verse for you as well. Hell, not connecting through the internet might actually force people to get hobbies and go outside and, you know, make friends in person. Oh god forbid. Maybe it's just a great way for people to store memories, which was why I got an Instagram in the first place. I wanted to document my last year in Pennsylvania, but now that I think about it, I could have made an epic scrapbook, and pushed my creative boundaries.

I'm really trying to find the silver-lining, people, I really am, but I think it's gonna have to come down to one action. I'm gonna ride out the rest of this contract then go get my TracPhone back. I miss her dearly. I'll print out the pictures from my Instagram, there is still time for a scrapbook yet! I'll send my number to everyone I think may want to call me then delete my social media. I'll go outside on a Tuesday morning and smile at the unaesthetic sky, perhaps even begin to love the world for how she truly looks. I'll sit in my meditation to find refuge from this obvious fear of my own mind that I've been hiding from in the mindless scrolling through pictures and YouTube videos. Maybe I'll buy a camera to make the moments I want to capture, just for me, sacred again. I just want to know what it's like to be human, not a robot.

Maybe I'm exaggerating, maybe not, but it's certainly is a good question to pose.

If I disappear, don't be worried. At least you'll have your answer.