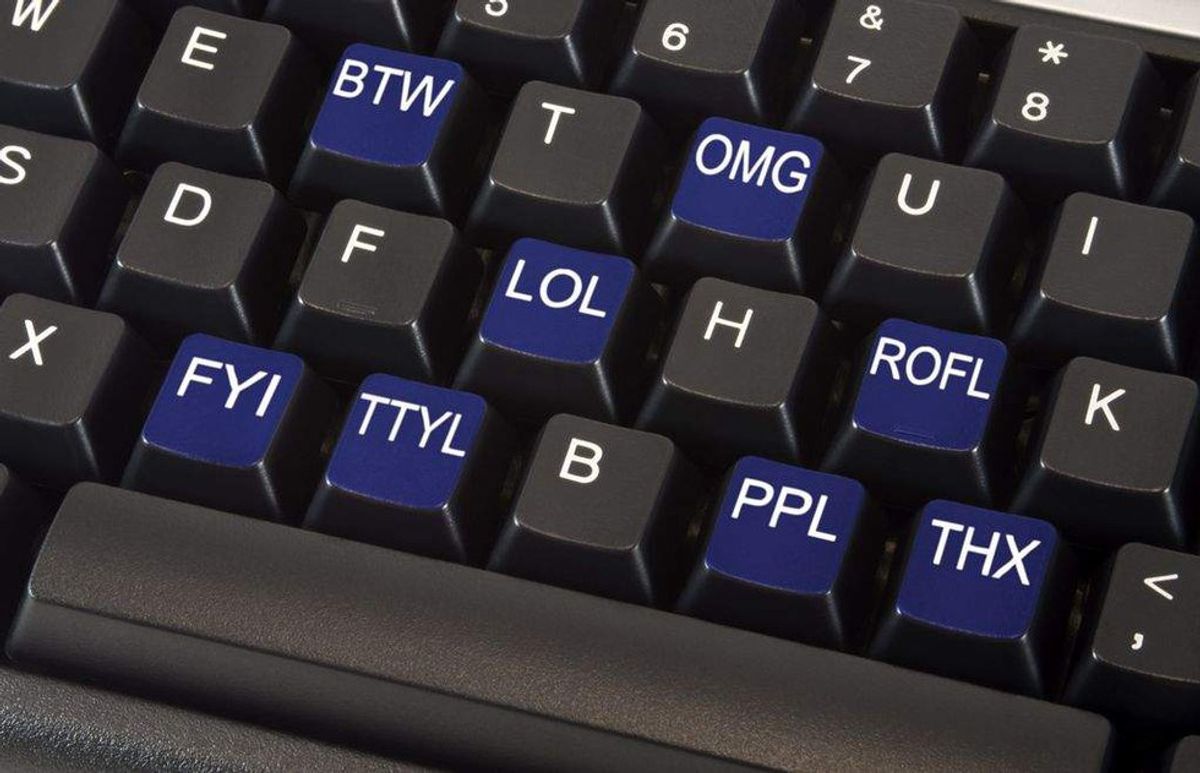 Supposedly, texting is ruining the English language. John Sutherland disparaged texting as "penmanship for illiterates," and he is not the only one afraid that the consequences of texting on language will be ultimately negative.

A fear that has emerged from the rise of texting is that texting has made this generation illiterate compared to previous generations. This myth has been basically debunked, since literacy scores of American children have risen slightly over the past 25 years, but the fear remains: is texting detrimental to language?

Contrary to the expectations of some people, a large body of research on the subject has positively linked – or at least failed to negatively link – use of texting lingo to literacy.

For instance, in one study, 88 British children were asked to compose text messages for several scenarios. They were also asked how often they used their phones. Children who used more texting abbreviations had better reading ability, even "controlling for individual differences in age, short-term memory, vocabulary, phonological awareness and how long they had owned a mobile phone." This result should probably not be surprising, since texting necessarily coincides with increased language use:

Imagine kids suddenly started playing catch literally all the time. Everywhere they go, they throw balls back and forth, toss them in the air, and hurl them at trees and signs – nearly every waking hour of their lives. Do you think their generation will suck at baseball because they learned sloppy skills?

It is fairly common for people to misspell words or use improper grammar in text messages, but this has also been linked to better understanding of language. The relationship was strongest during childhood, since intentional grammatical and spelling errors allow children to "play around with" language informally. This helps them reframe and better understand the relationship between language conventions, sounds, and meaning.

Perhaps more importantly, texting and internet lingo have allowed more meaning to be conveyed in writing. A higher density of intentional spelling and grammar mistakes can be used to indicate a casual or lighthearted tone. Unnecessary Capitalization or Other Formalities™ can provide emphasis (often sarcastically) among other nuances:

it’s kinda cool how our generation has created actual tone in the way we write online. like whether we: write properly with perfect grammar, shrthnd everythin, use capitals to emphasise The Point, use extra letters or characters for emotion!!!!!, and much more - it means we can have casual conversations, effectively make jokes using things like sarcasm that’s usually hard to understand without context and much more. this “incorrect English” has really opened avenues of online conversation that isn’t accessible with “correct English” which is pretty interesting.

Emoticons add yet another layer of meaning, which bring written conversation even closer to in-person conversation in terms of expressiveness. They are much more nuanced than ":)" meaning "happy" – in some contexts, ":)" can actually be negative since it indicates passive-aggression. Consider this sentence: "I just love how rude people are :)"

Other emoticons also mean "happy," but have totally different connotations. These include ":D" (genuine joy "like a happy dog who has missed his owner"), ":^)" (cheekiness), ";)" (a joking or flirtatious wink), "8D" (mania), ":3" (a cat face meant to be cute, geeky, ditzy, or coy), and "c:" (a relatively simple happy face). There are hundreds more, each with its own unique connotations that may change depending on the context.

The continued evolution of language should not be dismissed out of hand, but we should welcome and seek to understand its new forms.

Buffer: "7 Science-Based Reasons to Use Emoticons"