Which Desperate Housewives Character Are You Based On Your Zodiac Sign? 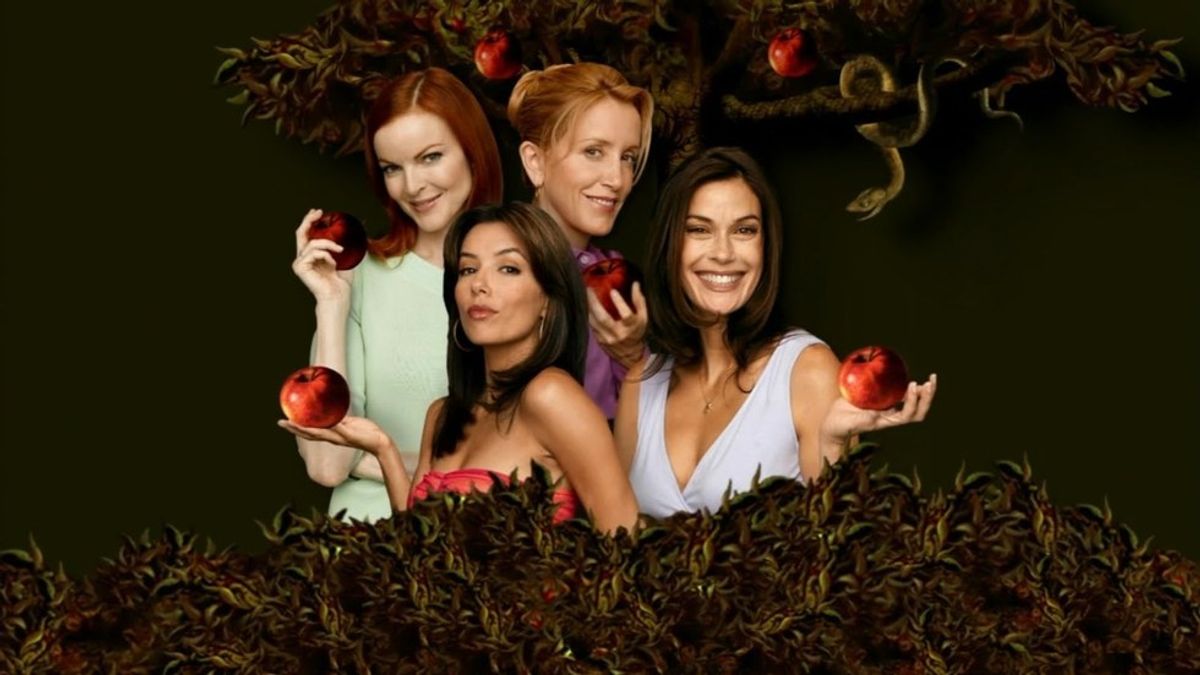 From 2004-2012, our television broadcasted the dramatic lives of the women on Wisteria Lane. These Desperate Housewives dominated daytime tv and won countless awards for their sex, secrets, and scandals.

I was late to the Desperate Housewives game, (I was only seven when it first aired) but I hopped on the bandwagon nonetheless. I binged all eight seasons on Netflix and was soon obsessed with the soap opera.

I absolutely love reading articles that relate zodiac signs to tv characters, and since there isn't one for DH, I figured I should do it myself.

I carefully analyzed each character and placed them with a sign that I thought fit them best. I've watched this entire series at least 6 times, so I'd say I know these ladies and their co-stars pretty well.

So, without further ado, here is your Desperate Housewives character based on your zodiac sign.

You identify with Edie because you know what you want, and you aren't going to stop until you get it. You can be aggressive in achieving your goals, much like Edie fighting Susan over Mike for what felt like forever. Sometimes you can be a bit of a bully, but it's only because you're so focused on your goal. You have a fiery personality, and you're not afraid to show it.

Fellow Taureans like myself identify with Gabrielle because she knows her worth. She's confident, and definitely very stubborn. She also enjoys the finer things in life, and Taureans are known to be materialistic. (guilty) Gabrielle puts her foot down when she's tired of Carlos not giving her enough attention. She holds her own, even when Carlos goes blind. She's a stable, grounded character on the lane.

As a Gemini, you're youthful and don't like to be tied down. This can lead you to be indecisive and sometimes impulsive, but you're life is always an adventure, much like Katherine. She kept her life interesting by adopting a daughter, almost marrying Mike, stabbing herself, becoming a lesbian, and moving to Paris. Gemini all the way.

Like Tom, Cancers are warm and homey. You're calm, loving, and always putting the happiness of others first. Everyone knows that Lynette has a lot on her plate, and Tom is willing to do whatever he can to make her life easier. Sometimes you can be a bit of a pushover, but you do everything out of love.

You're a natural born leader and you're not afraid to go after what you want, much like Carlos. He proposed to Gabrielle on their third date. That's confidence. And you radiant confidence as a Leo. Leo's think highly of themselves, so it's hard for them when their pride takes a hit, much like when Carlos loses his sight. But you'll stick through a persevere. You have an unfaltering determination.

Virgos are the logical sign of the zodiac. Kind, mild-mannered, and gentle, you always give the best advice, and you're always the easiest person to talk to. Who better for this sign than Mary Alice herself. In the aftermath of her heart-wrenching suicide, flashbacks depict her as always giving advice, and always being there for her friends, just like a Virgo. You can act rashly at times, but it all comes from a good heart.

Libras are the peacemakers. They like balance, and harmony, and they like to portray the very best possible image of themselves. You identify with Bree because she shapes her life around being the perfect wife and mother. She's very OCD, but only because she wants to give others her absolute best. Perfect house, perfect meals, perfect life. Everything a Libra would want.

The biggest thing for Lynette is being in control. She's got a lot going on, and she has her own way of dealing with it. As a Scorpio, you have your very specific way of doing things as well. You just don't see how any other way could be better. Unfortunately, sometimes this leads you to be unwilling to listen to new ideas, like when Lynette just couldn't wrap her head around Tom wanting to open the pizzeria. No worries, though. You'll come around.

Sagittarius's are one of the most passionate signs of the zodiac, so it would make sense that you identify with Mike Delfino. Not just because he's a dreamboat, but because his passion drives him through the entire series. He hunts down his girlfriend's killer after 15 years. Like Mike, you are an ambitious and passionate fire sign. You won't stop at anything for the people you love.

Capricorn are very dimensional, and sometimes they can be tricky because of this. You might have a tendency to put up walls, but once people get to know you, they find that you're full of advice and wisdom. This is just like Karen, because she puts up a facade that she's mean and spiteful, but once you get to know her, you learn how caring and wise she really is.

Aquarians, you're like Paul Young in the sense that you're very independent. You don't wear your heart on your sleeve. You tend to be a little anti-social, but it's only because you're happier alone with your own thoughts. Paul is very methodical, and shut himself in when Mary Alice committed suicide. He'd rather grieve on his own.

All my Pisces out there absolutely identify with Susan Mayer because, quite the opposite of Paul and the Aquarians, you DO wear your heart on your sleeve. You're very in tune with your emotions, and sometimes you can't keep a secret to save your life. Sometimes you can be a bit of a martyr, which is right on target with Susan. Pretty sure she spilled the most dirt, and she cried more than anyone else on the show. BUT, her kindness made us smile nonetheless.


So, there you have it! Hope you enjoyed the throwback to our favorite ladies of Fairview! May they forever be in our hearts.