Descending To Heaven: Darryll Schiff Is One Of Chicago's Most Up And Coming Artists

Descending To Heaven: Darryll Schiff Is One Of Chicago's Most Up And Coming Artists

A Chicago photographer's portrayal of enlightenment. 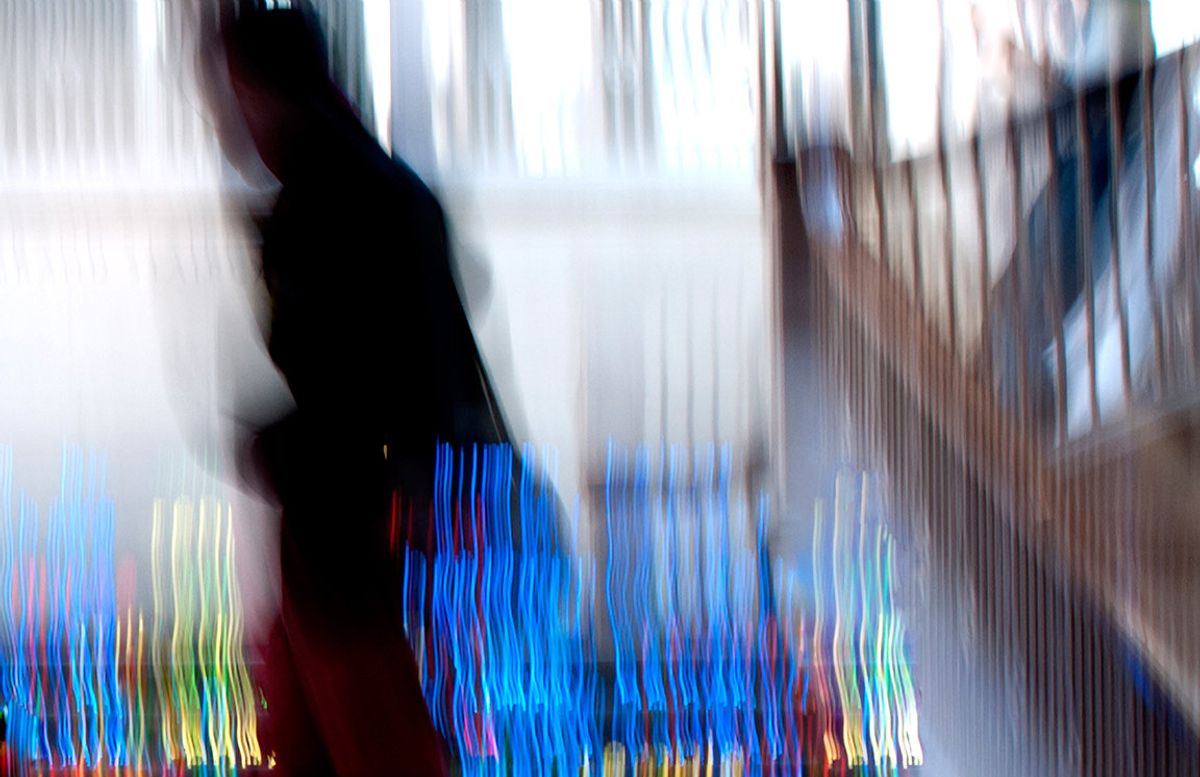 “Descending to Heaven” is the cornerstone of Schiff’s acclaimed “To Heaven” series; the artist's contemplative reaction and interpretation of Indian artist Jitish Kallat’s 2011 site-specific LED text installation at the Art Institute of Chicago. Darryll Schiff's fusion of elongated motion and illumination harmoniously work together in this series to create intoxicating compositions with a pointed message. Noted for his distinct vision and ability to capture movement and light, Schiff’s images brilliantly serve as an expression of mankind, moving out of the darkness to further enlightenment. But Schiff allows for the viewer to interpret themselves, whether it is true enlightenment or a false belief. Schiff hopes to convey through this piece a bright side to humanity, as it calls upon viewers to reflect on the prophets we follow and the paths we choose freely.

This series explores the topic of displaced meaning – cultural meaning that has been deliberately removed from the daily life of a community and relocated in a distant cultural domain (typically the in the idealized past or the utopian future). Examining the gap between the “real” and the “ideal”, Darryll showcases the human struggle of naive optimism vs. open cynicism. Schiff's “Heaven” is especially relevant today with current ideals placed in a fictional moment of a so-called American “golden age” - which social life is imagined to have conformed perfectly to cultural ideals (Make America Great Again). The fiction of “the golden age” is a long-standing tradition within Western culture, which often isolates minorities whose ideals do not coincide and whose needs are frequently ignored. The future is a versatile location for displaced meaning – a place for the perfect democracy in which all people are fully equal and free, a future that advances a common good for all. Some of these may be realistic possibilities, however, the trouble with displaced meaning is the way change is regarded as a future event and not a present activity.

President Obama's Lincoln quote in the final State of the Union address is as poignant now as it was in 1862 – placing value on a hopeful future:

"America has been through big changes before — wars and depression, the influx of immigrants, workers fighting for a fair deal, and movements to expand civil rights. Each time, there have been those who told us to fear the future; who claimed we could slam the brakes on change, promising to restore past glory if we just got some group or idea that was threatening America under control. And each time, we overcame those fears. We did not, in the words of Lincoln, adhere to the 'dogmas of the quiet past.' Instead, we thought anew and acted anew. We made change work for us, always extending America's promise outward, to the next frontier, to more and more people. And because we did — because we saw opportunity where others saw only peril — we emerged stronger and better than before."

Though there are connections to current events, the piece itself is based on a speech delivered during the 1893 World's Columbian Exposition in Chicago. The speech, delivered by monk Swami Vivekananda, urged religious tolerance across the world. The speech addressed how we can accomplish peace and abolish tyranny in the world and things to that effect - promising heaven on earth - as Schiff interpreted the speech. "My picture, it’s all the bright lights I take to be the words from the speech, and they get brighter and brighter as you keep reaching for that pie in the sky." But in the photo, Schiff's subjects never reach that point. "To a certain degree, [the picture says] don’t be lured in by all these words and promises."

Schiff’s color palette is never short of amazing as it lures the viewer in to contemplate not only how his work is made, but the deeper meaning behind it. Known for his brilliant use of color extension in photography, Schiff's photographic works are a beautiful, unexpected interaction of color that furthers his ideas regarding community ideals and how reachable our goals really are within a society. Though “To Heaven” is representational in a sense, the work abstracts with a focus on light and color – representing how easily people get swept up in alluring promises - whether its a return to an idealized past or promises of a better tomorrow.

Some areas are denser with light than others, creating the dispersion of depth and a sense of motion one might expect given the title and it’s reference to a cosmic force or place of nirvana. Schiff takes spatial relationships into great consideration when composing each image with tight control over what recedes visually and what comes forward in his color palette. Schiff intentionally makes one color more active than others as a contrast to draw emphasis on important areas of the image that hold significance to the message of the piece.

The use of color greatly impacts the message of the composition - emotions are generated largely based upon the balance of equivalence or disproportionality within each piece. This series draws attention to cool color schemes with washes of bright color and light. This technique is applied throughout Schiff's “To Heaven” series which makes it compelling to look at the work as a whole with side by side comparisons from piece to piece in order to see inversion techniques in the “decent” to heaven.

Schiff’s piece titled "Descending to Heaven" was made into a massive 24x56 foot mural, installed at 710 South Wabash located in Chicago's South Loop. Schiff is the only photographic artist featured in the corridor and his work is the first and only mural installed with lights - fitting to the message of his work.

The illumination and location of Schiff’'s mural have made it one of the most prominent works of the public art corridor, visible by foot, car and even train for those on Wabash and 8th or riding the rails between the Roosevelt and Harold Washington stops. Schiff’s impeccable and distinct photographic style showcases the
excitement of Chicago and it’s electrifying urban sprawl.

Darryll Schiff has become one of Chicago's most prominent artists and he is only gaining momentum, in 2016 Schiff's work was selected to be exhibited in international art fairs including Art Busan in South Korea and the Bazaar Art Fair in Jakarta, Indonesia as well as a local a solo exhibition in Chicago’s River North art district. Schiff is gearing up for upcoming art fairs in LA.