She is the blood of the dragon for a reason. 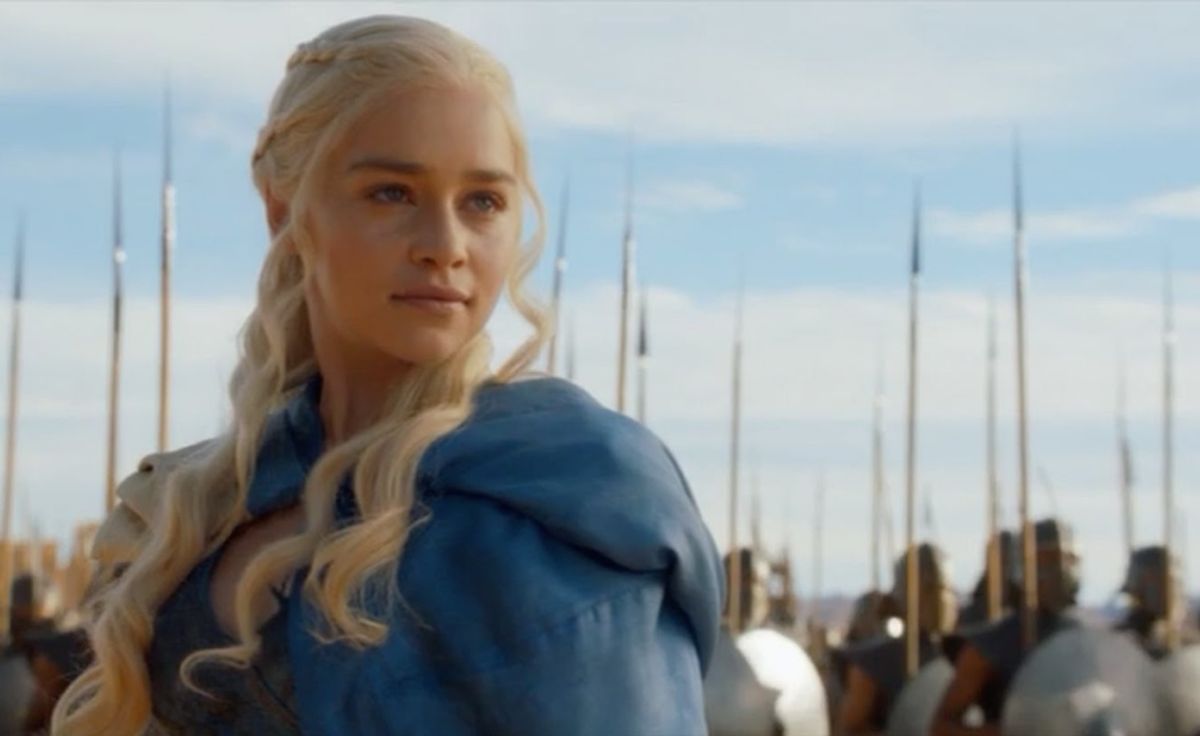 From the moment I arrived home after all my finals were done and my winter break had officially begun, I sat down to (finally) watch "Game of Thrones." Yes, I know, I'm super late. But forgive me, I've been so busy watching various other shows that many of my friends recommend.

Anyways, as I breezed through four of the seasons within a span of five days (yeah, I have no social life when I'm home), I came to love Daenerys Stormborn of the House of Targaryen more and more. Was it the way she blossomed from an innocent, scared and timid girl to a confident and powerful female? Yes. The way she transforms is significant in that it teaches other females that they too are just as empowered. Here are 13 times Daenerys made me look up to her.

1. When she stood up to her brother

After years of being in the shadow of her brother, and being subject to his abuse, Dany stands up to him, showing him that she is no longer obedient to him.

2. When she claimed the title of Khaleesi

Finally finding a place amongst the Dothraki people, she takes her place as a Khaleesi after her beloved Khal Drogo dies. As a Khaleesi in her own right, she forms her own Khalasar, proving that she does not need a man to be a leader.

3. When she goes to the spice merchant in Qarth

Trying to get ships from the merchant nobles of Qarth to aid in her conquest of regaining the Iron Throne, the spice merchant makes the mistake of calling her a "little princess." Dany makes it clear that she is no little princess, she is the Mother of Dragons and a Khaleesi; she will regain what is hers, and she will do it her way.

4. When she declares that her dreams come true

Right before the spice merchant insults her, she claims that is no ordinary women and that all her dreams come true. Dany will follow her heart for what she believes is right.

5. When the Qarth wizard thinks he can hold her hostage

When her children are taken as hostages, Dany refuses to leave without them, showing her maternal side. She goes to rescue them and is put in chains next to her dragons. Dany coolly looks at her dragons and commands, "Dracarys," meaning "dragon fire." Her little dragons breathe fire and burn the Qarth wizard freeing themselves and Dany.

6. When she reminds Ser Jorrah and Ser Barristan that she is the boss

When Dany offers to trade her biggest dragon, Drogon, for the rest of the unsullied, Ser Jorrah and Ser Barristan interrupt her trade negotiations and tell her not to, that Drogon is worth more than the unsullied. After the negotiation, she turns to both men and reminds them that she is the leader, the Khaleesi, the rightful queen of the realm and that they should never question her decisions again.

7. When she reveals she knew the language all along

When the slavemaster of Astapor tries to tame Drogon, after Dany "sold" Drogon to him for the rest of the unsullied, Dany commands "Dracarys," surprising the slavemaster who did not realize that she understood Valyrian. He must have felt embarrassed for consistently insulting Dany without realizing she understood everything he was saying.

8. When she tells her newest advisor that "Valar Morghulis" does not apply to them

9. When the freed Unsullied pledged their loyalty to her

After buying the Unsullied, she frees them. She recognizes that they have been slaves for most of their lives and that they do not need to follow her if they do not wish to. Fortunately for the Mother of Dragons, all the unsullied remained and pledged their loyalty to her.

10. When the representative for Yunkai tries to take back what he gave her

Not liking the fact that Daenerys' dragons posed a threat to his life, the representative of Yunkai tells his slaves to take back the gold he presented her when he first arrived to see her. Daenerys smugly tells him that he gifted the gold to her and that he cannot take it back; she tells him to challenge her if he wants to.

11. When Ser Barriston once again tries to dissuade her decision

After the representative of Yunkai leaves, claiming that Yunkai has "powerful friends" that could destroy her and her army, Daenerys orders her men to look into who these "powerful friends" are. Ser Barriston tries to tell her that it's not a good idea, but Dany tells him otherwise.

12. When she freed the slaves of Yunkai

After capturing Yunkai, Daenerys tells all the slaves that they are free. She cannot give them their freedom because it is not hers to give, but for them to take. She is claimed "Mhysa" or "mother" to all of these former slaves.

13. When she told Tyrion Lannister she was going to take what is rightfully hers

When Tyrion Lannister comes to see her and offers her his services in order to reclaim the Iron Throne, she tells him that she will take what is hers. He replies that she will have to face various enemies and that it is quite a dream she has built for her self. He tells her to stay where she is, ruling the people she has freed and forget the Iron Throne.

But Daenerys thinks otherwise; she will "break the wheel," she will break this cycle of fighting and take her rightful place on the Iron Throne.