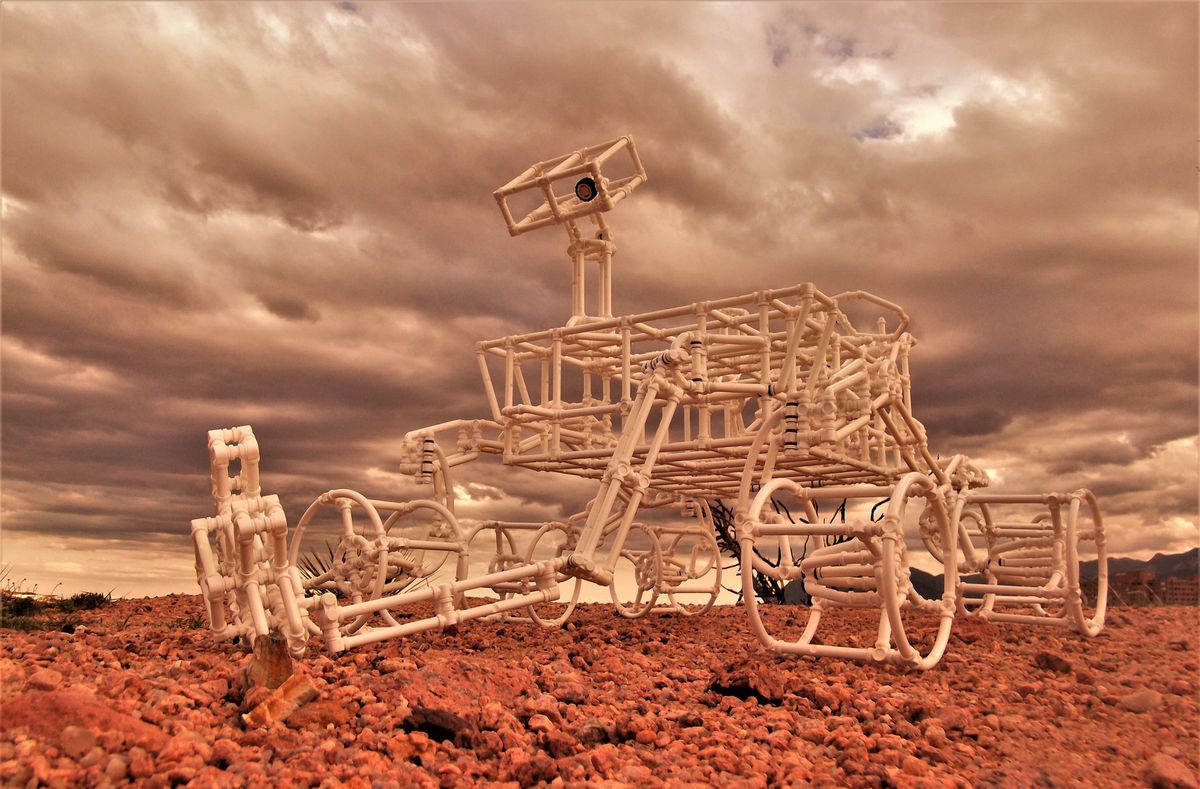 “My twelve-year-old made this,” Charles Sharman explains.

I nod, still looking at the scale model of the Mars rover Curiosity in my living room.

This model is the latest of Sharman’s Crossbeams kits, a building toy he began developing in 2003 which easily appeals to both adults and kids.

“I had to help [my son] with a few things,” Sharman says modestly and then points out some of the model’s features, even removing one section for me.

I move the stainless white plastic pieces in my hand, marveling at the fact such small objects can hold as much as twenty pounds.

Crossbeams, as Sharman describes it, began in 2003 when one of his sons asked if they could build a maglev train.

Being an electrical engineer, Sharman was used to taking a breadboard -- similar to the device school children use to rig a battery to a light bulb -- and quickly attempting all kinds of projects at home.

Electrical engineers can use breadboards as basic tools to easily experiment.

Mechanical engineering, which focuses more on building machines, didn’t have a breadboard-like tool people could use to easily try different projects.

Later, Sharman noticed something in the Sunday School classes he taught: many young kids loved creating things with LEGO sets and other building toys.

Eventually, though, those kids gave up creating things in favor of “passive entertainment,” such as video games.

Sharman decided that since no one had a building toy that interested older kids, he would make one himself.

This toy would also serve as a basic tool for mechanical projects, allowing anyone to cheaply try out mechanical ideas.

After several years of developing the toy in his spare time (including teaching himself how to machine-make the parts) Sharman quit his day job in 2009 and launched Seven: Twelve Engineering in 2010.

The first Crossbeams kits hit the market in 2014.

Since then, Crossbeams models have gained praise from toy reviewers, bloggers, and Sharman’s alma mater, Caltech.

As Sharman explained to Michael Cochrane of WORLD magazine, he designed Crossbeams to be more versatile than other building toys, which he says are really “assembly toys.”

When people buy most building toy sets, they quickly discover those sets have highly specialized pieces for making only one design.

“Now, you could stock up with 1300 assembly toy piece types to build anything. However, that gets expensive, and it becomes an organizational mess.”

Various people have made the same criticism, claiming companies such as LEGO have lost their creative edge by investing in highly specialized sets.

These pieces are versatile so people can build numerous sets, from a model horse to a dirt bike.

With the Crossbeams Modeller program, people can even design their own sets and share their designs with others.

“The possibilities are endless to what you can create,” former Crossbeams model designer Mary Bell says. “Because of this, it can also be used for prototyping which allows designers of all ages to make models.”

Sharman has several future plans for Crossbeams, including adding electronic components and releasing his book “Designing with Crossbeams.”

Once the electronics get added, he’ll be able to finally create the maglev train he wanted to build years ago.

As Sharman said in one interview though, the real goal is encouraging young adults to start making things again.

“Whether it’s Crossbeams, musical compositions, stories, or painting, once young adults are known for their creating instead of their consuming, our work is done.”