Collider And Schmoes Know: The Best In The Biz
Odyssey

Collider And Schmoes Know: The Best In The Biz

Do you love movies? Want to know more? You've come to the right place. 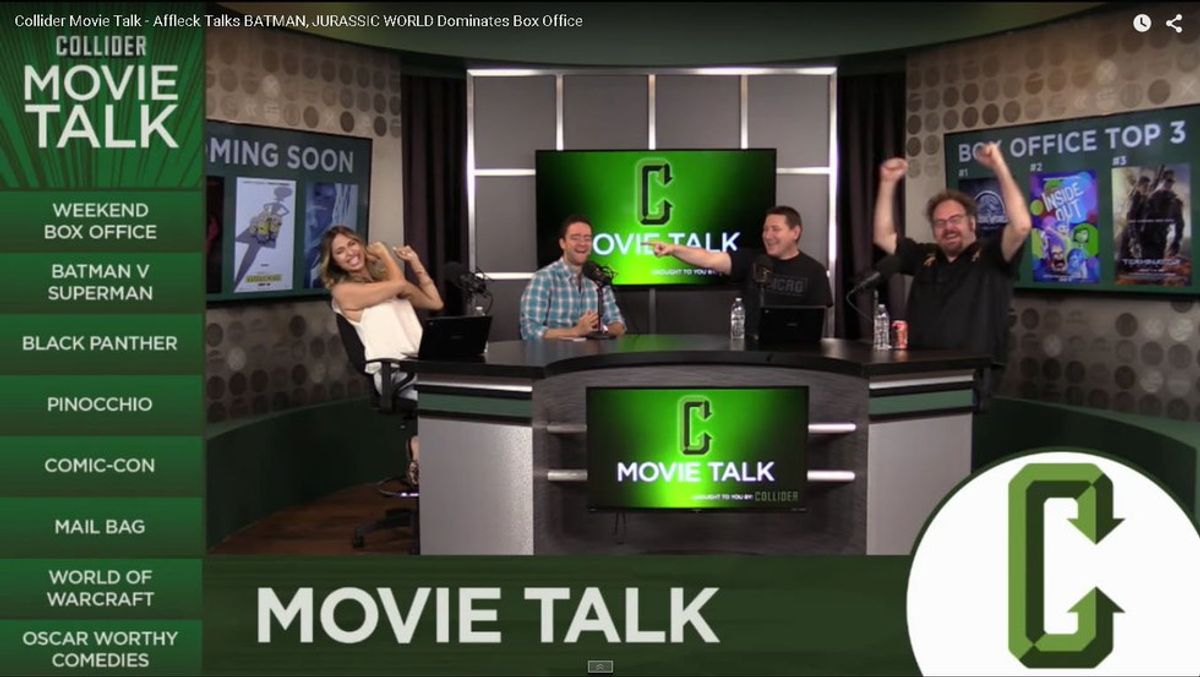 Everyone enjoys a good movie, right? People watch movies for a variety of reasons, but sometimes the casual movie fan might not understand the process of filmmaking, the business aspect of Hollywood, or the depth within certain films. Fortunately, if someone were to have that problem, it can be remedied by the amazing crew at Collider, Schmoes Know, and their fantastic fan base that I’m proud to be a part of.

No matter what types of movies or television shows you are into, the folks at Collider have you covered. Their YouTube channel, which is where most of their content is found, features a handful of different types of shows that can help you stay up to date for whichever genre you are interested in. Collider Movie Talk, the original and main movie information show, is a lot like the SportsCenter of movies. Led by Executive Producer and Head of Programming, John Campea, Monday through Friday he leads an hour-long show running down all the major movie news for that day and usually answer some mailbag and live twitter questions. Anyone ever heard of Jeremy Jahns on YouTube? The crazy awesome movie reviewer dude? Yeah, he’s a regular now on Collider Movie Talk. It’s a fun, informative environment that is a pleasure to watch.

In the past few years, Collider has expanded their content to more than just Movie Talk (formerly AMC Movie Talk). They also have Collider TV Talk (similar to Movie Talk, but with television shows), Collider Heroes (all things superhero and comic-book related), Collider Jedi Council (I’m assuming you can guess the content of this show), Collider Nightmares (movie news related to the horror genre), and a few newer shows, like Collider Crash Course (explaining some of the frequently asked questions about certain movie characters or behind the scenes information) and Collider News (similar to Clevver News, but with their own spin). In addition, they have movie commentaries and reviews (non-spoilers and spoilers) for popular and new films. Most of these shows hit the internet once per week at about an hour long, but usually the time goes by quickly – so it must be fun, right?

Fun and respect seems to be the overarching theme to all of their content. The crew, featuring members like “Big” Jon Schnepp, Mark “Baby Carrots” Ellis, Kristian “Darth” Harloff, Perri "Grand Moff" Nemiroff, Ashley Mova, Natasha Martinez, Sinead DeVries, John “The Outlaw” Rocha, and Denniz Tzeng (and many more memorable faces), all have a great time together while still providing a professional and respectful work environment – even if they disagree with each other’s opinions. The cool part about having all these wonderful people at Collider is that they are also in the movie business, so they have first-hand knowledge of the industry. Campea produced his own film, DeVries has been an extra in a few TV shows, Nemiroff has produced a film as well, and Harloff and Ellis began as comedians. Did I forget to mention that Schnepp made a documentary a few years ago? I’m sure you might have heard about it. He directed the documentary, The Death of Superman Lives: What Happened? to great success, with the film reaching 85% on Rotten Tomatoes.

At this point, you’re probably wondering why I haven’t mentioned anything about Schmoes Know. Well, in fact, they are under the Collider umbrella. For those that don’t know, Schmoes Know is a movie review YouTube channel that also has a live show with more magnificent crew members that appear in other Collider shows as well. However, they are probably most known for their show, Movie Trivia Schmoedown, which is a competition show that challenges two contestants on their movie knowledge. There are singles and doubles matches that are done to the style of a UFC fight. It’s thrilling, entertaining, and intense. The great part is that it isn’t only restricted to Collider or Schmoes Know members. Screen Junkies, The Reel Rejects, Superhero News, and Olympic swimmer Cody Miller have all competed on the show. I highly recommend Movie Trivia Schmoedown.

It can feel like a lot of information to process, but if you check out their YouTube channel (well, okay, channels), it is easy to navigate to what content you want to watch. The crew members are all fun to listen to and watch, and they create high quality content. If you love movies and want to know more about them, this is the place to go. You don’t have to watch all of their shows – even I have trouble finding time in my busy college schedule to keep up – but it is definitely worth it. Collider and Schmoes Know: all of us here at Schmoeville thank you for all your long hours and hard work you put in. The world needs more people like you guys. You will always be a wonderful part of my day. Now keep bringing the filthy!

Glorie Martinez
4504
Why I Write On Odyssey