A day in the life of a college baseball player. 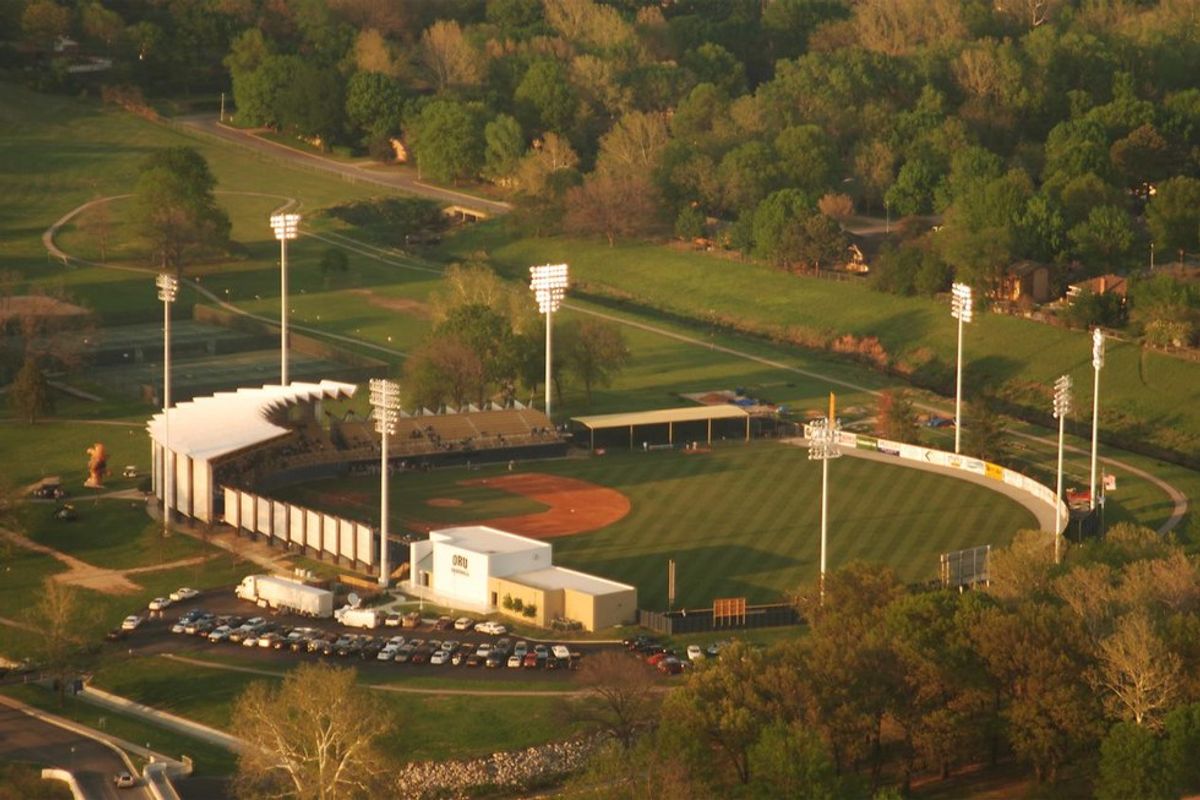 25 Let your eyes look straight ahead; fix your gaze directly before you. 26 Give careful thought to the paths of your feet and be steadfast in all your ways. Proverbs 4:25-26

As the rest of the campus is entering into their final 2 hours of sleep, the Oral Roberts pitching staff readies itself for their second morning lift of the week. Today is rear-foot-elevated front squat day, great way to start off a Thursday. A large "425" is painted on the front wall of the clubhouse acting as a constant reminder why the staff's awake before the sun. JL Johnson Stadium is 425 miles from Omaha, Nebraska, where the best teams in the nation will face off in the College World Series. Every lift, every pitch, every swing has to be accounted for if they want to make it all 425 miles.

A few tap the 425 sign as the 16 pitchers jog over to the weight room. The lift is scheduled for 6 a.m., but if you’re a minute late to five minutes early you’ll be pushing plates for half the lift. As the team stretches out the six pitchers that are scheduled for bullpens that day break apart and head upstairs to do flexibility training; they’ll lift at 5 p.m. with the position players.

As the rest of the campus is beginning to wake up, half the team gets breakfast in the empty cafeteria. While students are hitting snooze and dreading class, the pitchers are beginning to feel the toll from a heavy leg day that included squats, side lunges, box jumps, medicine ball slams and whole horde of other fun morning activities.

In order to be done in time for practice, all 12-18.5 credit hours must be crammed into a long 7-hour span. Leaving athletes with few-to-no gaps between classes. Being a student athlete doesn’t come with any privileges, the university makes sure that "student" comes first. Random class checks are performed in order to make certain that the athletes are in every class, every day, the entire semester. The only time they are allowed to miss is on game day and even then, all the work they miss is due next class.

Pitchers have to be stretched out and ready to go at 2:30. The practice schedule is posted up inside the clubhouse specific to each pitcher. Long toss, easy catch, bullpen, flat ground with a focus on put-away breaking balls, 1-1 counts, the list goes on. Each pitcher must know what is expected of him on that given day.

After warming up, the team breaks apart. The position players head down the left-field line to get stretched out, the pitchers down the right field line to go through their throwing program.

The two pitchers scheduled for the first bullpen get their arms loose. Their bullpen today will be a 45 pitch session that focusses on locating fastballs in various counts. 0-0, fastball on either half of the plate. 0-1, fastball on the outer third of the plate, 0-2, fastball a baseball's length off the plate. This bullpen is vital: if you can't locate your fastball, you can't get outs. The difference of hitting your spot and missing it by mere inches is the difference between getting a weak dribbler to second, or a giving up a base knock.

As the first bullpens begin, the rest of the staff jogs to the indoor for PFP (pitcher fielding practice). In a nine inning game all the pitchers combined may have a mere 3-4 balls hit to them. These outs can take or give an inning to the opposing team. A booted ball or throwing error can add anywhere from 5-12 extra pitches on the inning putting the pitcher way over his goal of 15 pitches or less per inning. For a starter, that can be the difference between going six innings, or getting pulled after four. The longer you’re on the mound each inning, the quicker your arm fatigues. Every out matters. Fielding bunts for a half hour can become tedious but is necessary in order to ensure the team gets those four outs. Without complaint the 12 pitchers split into two lines, and begin the drill. The two pitchers left over begin getting loose for their bullpen.

After PFP the staff jogs back out to the field and rejoin the position players. Some pitchers work on their pick-offs, some start their daily conditioning (today is 8 circuits of pole to pole jog the gap, sprint to center, jog the gap, sprint to the pole), and the leftovers head to the outfield to shag batting practice. Every 15 minutes or so, the pitchers switch it up.

As the sun starts to set, the stadium lights come on. The field is brightly lit for the last bit of practice. The team jogs in, coaches share their closing comments, and then the players split to do their post practice duties. Some fix the mound, some sweep the dugouts; everyone has a job.

Once the work is done, the position players head to the weight room along with the 6 pitchers that threw bullpens. The remaining 12 pitchers head back to the clubhouse. Despite being done with their lift, classes, and practice, their day isn’t over just yet.

Pitchers head out for dinner. The pitchers that live on campus head to the cafeteria, the ones that live off head out to get a quick dinner.

Half hour break for dinner is over and now it’s time to get back to work. On the second floor of the GC, several athletes from all sports gather in the Eli Center (academic center for athletes) for study hall.

All first-semester athletes, with few exceptions, are required 8 hours of study hall a week. If you have a minimum 3.0 GPA by the end of the semester you no longer have study hall. If you don’t, back to study hall.

A team’s GPA is seen as a direct representation of both the team and the school. The baseball team's GPA in the 2014-2015 season was one of the highest in the nation. The GPA of the entire ORU athletics during the 2014-2015 year was the schools’ highest in its entire 50 years of being open.

Whether in study hall, or in the dorm room, these late hours are spent studying. During the season these nights will be even tougher. Baseball averages 4 games a week, 2 of those landing on weekdays. Often times when there's an away weekend series the team has to travel on Thursday. This leaves the athletes having to make up 3 days worth of school work, learning most of the material either on their own, or with the help of a tudor. It's not easy.

Books are cracked, computer's are open, after a long day and exhausting practice, the last hours are spent studying.

10 p.m., the Eli center closes and now finally, the day is done.

The first real free time begins. Some go back to their houses and dorm rooms, others head up to the school’s gym to work mechanics. Some back to the indoor to get some extra reps. The indoor facility now closes at 12:00 am each night because neighbors living across from the complex complained that they could hear the crack of bats hitting balls sometimes as late/early as 2:00 and 3:00 am. Late night hacks, produce late game hits.

16 straight hours of work with few very breaks and not paid a dime for it.

Why work so hard?

Each hour, each rep, each pitch, is inching closer to one goal: getting to Omaha.

Up before the sun. Still working when the sun goes down. Balancing studies and performance. Working harder than anyone and getting little to no recognition for it. Playing through sickness, playing through soreness, learning from failures. This is what it is to be a college baseball player. 16 straight hours of grinding work and still having motivation to put in extra work. It's exhausting. Yet if you ask any player on the team if it's worth it they'll answer, "every single second."