What's that red rain? Your data. 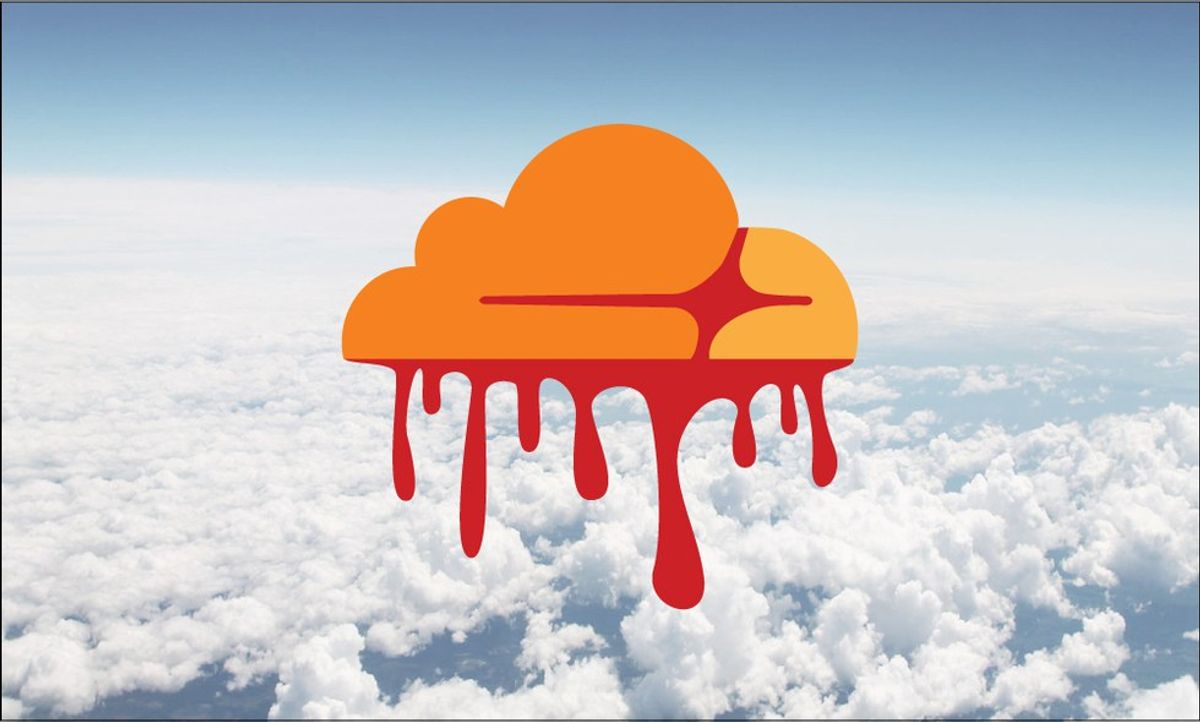 The cause was an obscure bug that emerged in September 2016 and lasted until this past February. A software "bug" refers to a coding flaw that causes unexpected results or behaviors.

This bug caused random user information to be displayed below normal content on pages and apps. Like the image below, it was a a seemingly scrambled bunch of letters and foreign symbols.

That scramble is another user's internet traffic. Mostly mundane but also potentially containing passwords, cookies and tokens in plain sight, for anyone who activated the bug to see.

To make matters worse those pages were saved, or cached, by search engines. Awkward.


How did this happen? What are the repercussions?

That's our Tech Translation topic. Class is in session.

While different from past issue nicknames like Heartbleed, nerds apparently lack originality and went with Cloudbleed. One article comment from The Hacker News pointed out that clouds don't bleed, but can form fallstreak holes. Cloudstreak has a better ring to it, no? #VoteForCloudstreak

Cloudflare is an intermediary for internet companies and their users. Site and app content pass through their networks before reaching you. In September they updated their information parsing software, which scans and modifies your content to provide modern features like hiding your email from scummy ad robots.

Bugs tend to emerge under some odd combination of settings and circumstances. In this case, about 0.06% of all web pages end with a broken script or image tag. For instance, if the very last thing on a site is an image, the code could be:

Normally the image URL would go after SRC= and a closing "> wraps it up neatly. It's not a huge deal, most browsers can handle small syntax errors like that.

The problem was their code to inspect all that website code, otherwise known as a parser. It was written with Ragel, by the way.

Imagine you're at the grocery store, waiting to check out. The cashier is blind and can only tell when your stuff, the site you're looking at, ends by the plastic dividers.

Due to a misorder of commands and a whole lot of crap luck, those grocery dividers did not stay put. The cashier mixed people's groceries together and they all wound up in your pantry. Therefore, someone else's completely different website data just showed up at the bottom of your screen in a garble of text.

For my nerds: When the parser encountered an open attribute at the end of a page, it did not know to not stop. Instead it continued to read from adjacent memory, which contained data from other customers' requests. Read Cloudflare's general writeup and incident analysis for more info.

An estimated 0.00003% of page requests contained leaks. But ten million requests a minute starts to pile up.

Not quite. In fairness, Cloudflare has done a solid job responding to the incident and is being transparent. The issues were fixed the same day and they immediately contacted search engines to start purging bugged pages.

At this point they're looking for any evidence of data mining. If someone noticed early on and quietly collected that information, after several months they could have something substantial. Thankfully that doesn't seem to be the case.

This was like leaving the faucet on all day when you leave for work. Nobody was hurt or defamed, but you seriously question the kind of adult you're turning out to be. Cloudbleed is a reminder for the tech world that silly mistakes can still happen without anyone noticing.

If you frequently use services mentioned above, change your passwords. Not much else to do right now.

That's all folks. Hopefully we learned something today.

Drop a comment or reach out on social media to discuss with me.

If Undergrads' College Majors Were All Purebred Dogs