Chris Evans Deserves All The Happiness In The World

He truly is the best Chris in Hollywood. 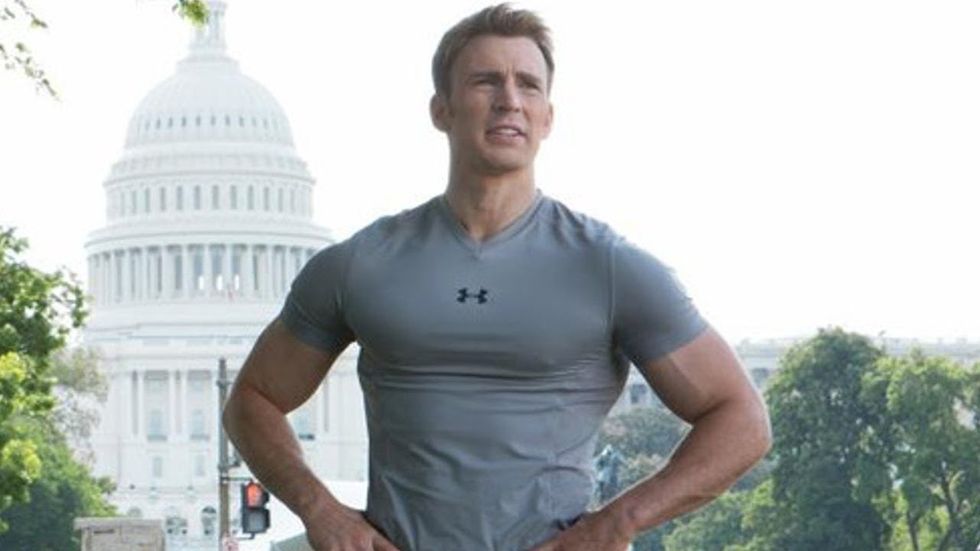 Chris Evans, aka the real-life Captain America, aka America's sweetheart. If you haven't seen a movie with him in it, please stop reading this and go watch every Captain America and Avenger's movie. There's no denying how adorable and pure his soul is. If you aren't convinced, we have these reasons below on why he deserves all the happiness and joy in the world.

He’s talked about how much he has wanted a wife and kids.

"I really want kids. Yeah, I do. I like pretty pedestrian, domestic things. I want a wife, I want kids. I like ceremony. I want to carve pumpkins and decorate Christmas trees and stuff like that." He continues to say, "I want to get married, though I want children−to me that's the ultimate thing.

When you're old and on your death bed, looking back at your life it's not going to be the films you've made or what you've accomplished, it's the relationships you have. You're survived by things that matter−the people you love and those who love you back."

He wants to star in a musical.

Yes, Chris Evans can sing too. He's a musical theatre kid and as a kid used to put on musicals with his siblings such as The Sound of Music. "We all thought it was so normal to be singing in front of my cousins and aunts and uncles at Christmas. Mortifying. Thank goodness this acting career worked out. Otherwise, I'd just be this forever dork. I probably still am."

He went to his 20th high school reunion.

He even put on his own little name tag saying, "Chris." If this isn't precious then I don't know what is.

He loves individuality in relationships.

He is quoted saying that, "I really like to be with someone who also has their own thing to do as well, you know? If I'm with someone who just kind of adopts my life; that can feel a bit suffocating." Which is a good thing to have in a relationship because it helps you not lose yourself along the way.

His description on what he looks for in a girlfriend is adorable.

He told Access Hollywood in 2012, "I like sneakers, I like ponytails, and I like sweatpants. I know a lot of guys say that, but I really mean that… I genuinely enjoy a girl that can wake up and wear no makeup and be okay to step outside and not be worried about what the public thinks."

He follows his mother’s golden advice.

"My mom told me that the best thing you could give a woman was attention. She said, 'Listen to her instead of trying to impress her. She taught me so much about women."

He was dumped at his senior prom.

"I was dumped at my senior prom−I was 18 and in love. We danced all night, then she got back together with her ex. It broke my heart." Cue the tears. I bet she's regretting that now. It's all right Chris, your future wife will dance with you and choose you 3000x.

He’s so sweet to his exes.

"Typically, if I see an ex, I give a big hug, and it's wonderful to catch up. If you're ever fortunate enough to love someone and have them love you back, it's worth protecting that. It's rare that someone can truly know you. And if you've broken through that kind of wall, I think it's important to value that."

Okay, I mean, how can you not love this guy?

What he said about one of his past girlfriends.

"I've never, ever, ever met someone in my life who has a mastery of the English language the way she does. She'll give you one sentence and there's no fat to it. You're like, "You just chose such an unbelievable collection of words that beautifully articulate what you say."

"She's so vulnerable, so honest, so interested in other people more than herself, she's incredibly compassionate, there's just nothing to not love about her,"

"You find that you cannot help to have respect for her. You spend five minutes with her and you cannot find something bad to say about her if you tried."

"You know, relationships are tricky, there are lot of moving pieces, but I am endlessly grateful for having met her. She will be in my life always."

He loves to rollerblade.

"I love to rollerblade. It's a bummer that rollerblading became uncool because it's freaking awesome. You have wheels on your feet. Come on! My friends make fun of me, but I love it."

His Disney obsession is adorable.

When he’s having a bad day he watches YouTube.

He still considers Massachusetts his home.

While he is a celebrity, he still considers Massachusetts his home and has renovated a farmhouse outside of Boston.

He is still tight with his childhood friends.​

"We have a real tight group of eight or ten guys. The majority of them are in the suburbs, and they all have kids. Now on the weekends, they come over here. We just drink, you know, and B.S."

I wonder if they all saw "Endgame" together.

He is a tap dancer.

He told The New York Times that he considers tap dancing awesome. He even has a tap dance floor installed in the basement of his house and will dance to work through anxiety.

He helped Regina King up at the 2019 Oscars.

He went to therapy to cope with his sudden fame.

We love a man who takes care of his mental health.

He turned down Captain America three times in fear of what the fame would do to his private life.

Robert Downey Jr. convinced him to accept the role.

He can laugh at himself.

Don't worry Chris, we all love you.

Okay, but it's so cute. You can't help but smile.

All his cute and funny moments.

He surprises kids in the hospital dressed as Captain America.

I'm dying at his heart.

There you have it. Why Chris Evans deserves all the happiness in the world is because he is just precious and adorable. That's all you can really sum it up to.

chris evans
Report this Content
This article has not been reviewed by Odyssey HQ and solely reflects the ideas and opinions of the creator.