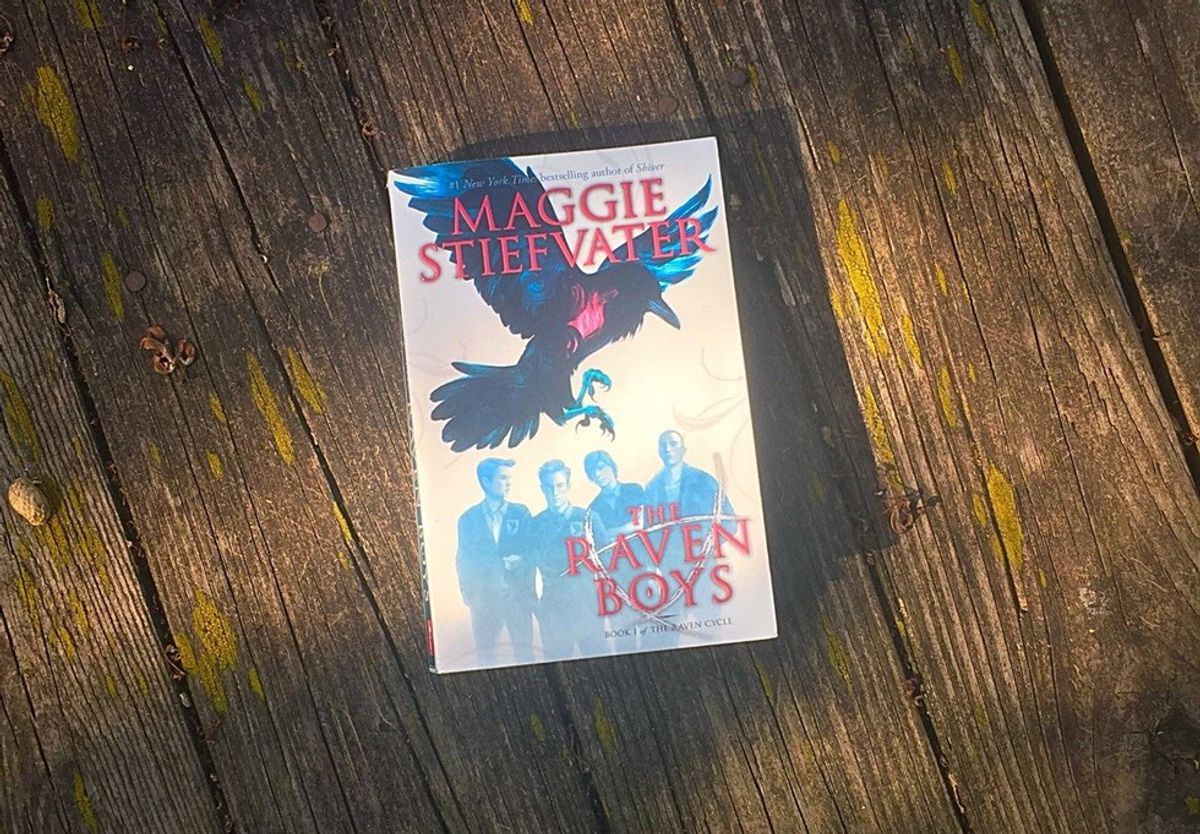 It’s never too late to review a great book. In this case, that book is “The Raven Boys”, book one in the esteemed series “The Raven Cycle” by author Maggie Stiefvater. Published in 2012, the book entices readers with a single quote on the back cover: “There are only two reasons a non-seer would see a spirit on St. Mark’s Eve. Either you’re his true love...or you killed him.” The book hooks you in with the promise of paranormal romance, and then whisks you away on the beginning of an epic tide of adventure. Filled with vivid imagery and language that aids the story whimsically, "The Raven Boys" is a great start to a promising story filled with adventure, exploring, romance, whip-smart characterization, and dead Welsh kings.

The book follows intelligent and fantastical 16-year-old Blue Sargent. Blue is the only non-seer in a house full of her eccentric psychic family members, but Blue doesn’t mind. She has one particular gift, though: She is like a battery for the supernatural. Her being around other psychics makes their powers stronger. As Blue puts it in Chapter One: “I hear about as much of the conversation as the telephone. I just make things louder for everyone else.” When she goes with her aunt to the cemetery to record the names of the soon-to-be-dead as they walk by, she finally sees what she has wished for her whole life to see: A spirit. This is Gansey, and now Blue is encased by a secret she didn’t ask for: Gansey will die this year. As if that’s not enough, Blue has been told her whole life that she will cause her true love to die, and that this is the year she will fall in love. It would seem Blue and Gansey are fated to meet.

The Raven boys, called so because they attend the prestigious Aglionby Academy whose mascot is a raven, are vivacious. Richard Campbell Gansey III (or “just Gansey!”, as he will constantly remind you) is the de facto leader of the four boys. Born into overwhelming affluence and deep Virginian wealth, Gansey seems to want only one thing: To find the ancient dead Welsh king Owen Glendower. Gansey has searched the world over for Glendower, and now his search has brought his to Henrietta, Virginia. Legend has it that the king is trapped in a deep slumber along the ley line (magical energy lines that cross the globe), and that whoever wakes him will be granted one favor. Gansey and his gang are on the hunt for Glendower, and when they meet Blue, she too becomes enraptured in the search for the long gone monarch. But all is not quiet on the home front: Soon Gansey and the gang learn that someone else may be searching for the ley line and Glendower, and that someone is closer to them than the gang might think.

Gansey’s friends are just as captivating as he is. The back of the book offers the best descriptions of Gansey’s seemingly mismatched boys: “Adam, the scholarship student who resents the privilege around him: Ronan, the fierce soul whose emotions range from anger to despair; and Noah, the taciturn watcher who notices many things but says very little.” The four boys are overwhelmingly loyal to each other, even though they don’t always agree on every small thing. Each character adds a poignant spark to the dynamic of "The Raven Boys," and soon, "The Raven Boys and Blue. Adam is a fuse sleeping too close to a match. He walks through the halls of Aglionby Academy with silent acerbity and cynicism directed at the wealthy young gods around him. He wants to find Glendower too, but for reasons differing from Gansey’s, and arguably much higher stakes. Ronan is repeatedly described as savage. He is walking danger, red volcanic eruption against a deep black Island sky. He seems to be closer to Gansey than the other boys, and you find out these reasons as the story progresses. There is much more to Ronan than meets the eye. Noah is silent and mysterious, the least noticeable Raven Boy. Noah is shrouded in conundrum, he is cryptic and enticing. As I read, I found myself hungry to learn and know more about every single character that I could, and to know more about their quest and their world.

Kirkus Reviews lauds the story as being “compulsively readable,” and this reader agrees wholeheartedly. Because of the vividity of the language, there are moments towards the beginning of the book that take a minute to get through, but it’s definitely worth powering through. I found myself looking forward with great anticipation to finally seeing Blue and Gansey meet, and I was not disappointed. The story is a strong mixture of both Showing and Telling, two things that are hard to balance for a writer, but Stiefvater handles it seemingly effortlessly. With surprising and captivating twists and turns, Stiefvater keeps her readers plowing on well past midnight. This is an amazing first book, and I cannot wait to finish the series and know more.

As Ronan tells Gansey about their quest: “It’s starting, man.” It certainly is, and I’m excited for the ride.

(To learn more about Maggie Stiefvater and her works, visit http://maggiestiefvater.com/. )