It's time to pick which JB you prefer. 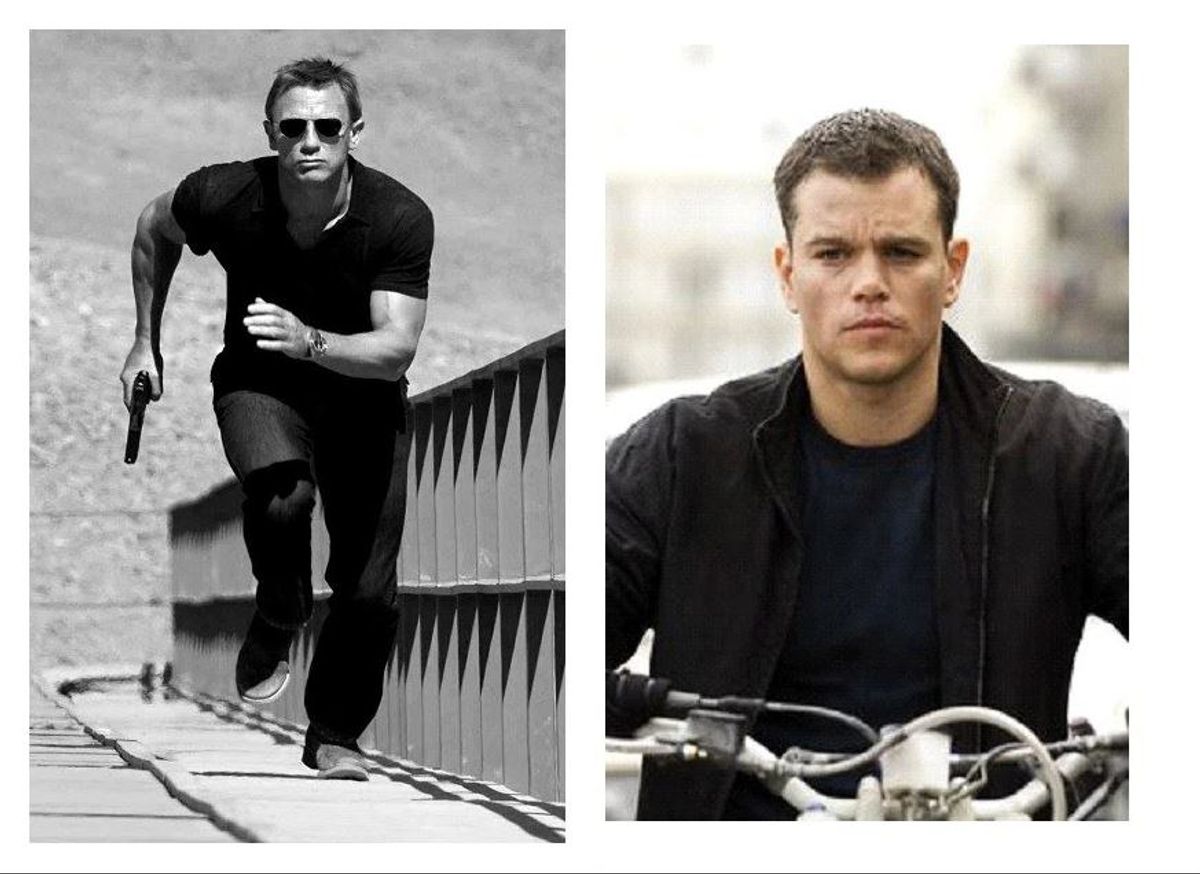 With the newest Jason Bourne movie having arrived in theaters last Friday with all the grace of a runaway freight train, the time is ripe for a comparison between Bourne and the other equally iconic movie character who shares initials with him, James Bond.

Pepsi or Coke, Ford or Chevy, Republican or Democrat, dogs or cats — this question is right up there among the great ones you will face in your life.

I prefer the Bourne movies, for reasons that I will detail below. You may argue that this admittance right at the start defeats the article's purpose, but I have my reasons, as will you to agree or disagree with me after you have finished perusing through it.

Your mission, should you choose to accept it, is to decide which action hero is better for you on a personal level, based on the reasons offered below.

(Ethan Hunt is not involved in this article, but this is a valid point nonetheless).

Perhaps the only similarity both these gentlemen share is that both these characters were born of the written word (well, one was Bourne of them. Get it?), and not written exclusively for the movies, and the authors were both in the know about intelligence and espionage activities in the times they wrote the books in, before making the fictional adventures their characters dealt with. There's something to be said there about the power and possibilities writing holds within itself.

Bond tries to drink his shortcomings away. But as chemistry so often tells us, alcohol is a solvent, not a solution. The antagonists, for the most part, seem self contained within the Bond universe, and their dastardly machinations seem mostly whimsical and not at all warmongering, or with any implications in the real world, if they were indeed carried out by someone in real life. Their plans seem menacing enough, but for another and older time. It is outlandish to consider that the plans would ever work in real life, let alone the thwarting aspect Bond carries out. The character has been played by six actors over fifty years and twenty four movies, with Daniel Craig being the newest actor to play Mr. Bond. Exposure wise and considering how long Bond has been in our collective cinematic consciousness, he has a million mile head start.

Jason Bourne. Adapted from the Robert Ludlum novels, of which there are three, then the series is continued by Eric Van Lustbader after Robert Ludlum's death, of which there are nine. Has only been on celluloid for the last fourteen years. The Bourne Identity stealthily snuck into theaters much like Bourne himself, in June 2002, and became a surprise smash hit, critically and commercially successful, and turned Matt Damon into a believable action star, and the role has now come to define him. Two sequels were made - The Bourne Supremacy in 2004, and the Bourne Ultimatum in 2007. After Ultimatum he said he wouldn't return for more, although he did admit that 'the movies were like a lifeblood to me.' He's the only actor yet to play the role, and if they listen to the fans (which they definitely did, seeing as Matt is back as Bourne) then Matt Damon will be the first and last Jason Bourne.

The attire and vehicles is strictly utilitarian, and much of the acting is internalized and behind Matt Damon's eyes. While there are quips and one liners, you can count on one hand the number of those across four movies. Bourne probably has around three pages of actual things he says in the movies. Consider the kind of vehicle Bourne would utilize in a car chase scenario :

A taxi found in the streets of Moscow. Whatever's in the environment, put to maximum and efficient use. This is from the second movie, and by the ending, the taxi looks like a metal pancake. It's a GAZ 3110 Volga, and it seems to be in the vein of an older BMW going by the grill and headlights and body length. Much more believable that a superspy would utilize a taxi in busy city streets than something like an Aston Martin, which so obviously stands out in the cold light of day, and makes it easier for pursuers to catch up with and dispatch you in whatever way they see fit.

However, this last part may be the strongest and most legitimate reason I dislike the Bond movies with the same vehemence Bourne hates the CIA - the inherent objectification of female character that seem to be as much a part of the movies as the iconic theme song and gun barrel opening credits that are also Bond hallmarks. Yes it is true that all the 'Bond girls' (now there's a truly cringeworthy term) have been some of the most beautiful women in cinematic history, but rarely do they figure as something more than eye candy for both leading man and the audience. While it has been toned down, it still retains an irksome and prominent presence, a throwback to the Mad Men era, and it for this reason, to quote Mark Cuban from Shark Tank, 'that I am out.'

Compare this to the Bourne movies, where strong female characters are often the reason Bourne gets anything done at all. Although Marie Kreutz, Bourne's girlfriend, played by Franka Potente, was *SPOILER ALERT* killed in the second movie's first act and in the most recent Bourne film Nicky Parsons, played by Julia Stiles *SPOILER ALERT* is also killed, the memory of what Bourne had with them powers both him and the audience through the rest of the story. Beneath his veneer of efficacy you can see just a tinge of remorse, sorrow and guilt, and those nuances make for more engaging movies overall, because you have to look for these things - they are not explicitly mentioned.

(Julia Stiles as Nicky Parsons in the Bourne Supremacy, 2004)

(Franka Potente as Marie Kreutz in the Bourne Identity, 2002)

As movies in this genre do not necessarily have strong, character driven female character relationships with the mostly male protagonist, for this reason as well as many others, Bourne is the believable action hero of the twenty first century. The threats he faces and the things the system has done to him draw uncomfortable, all too real, yet completely necessary parallels to real events. And at the core of it all, the movies show that Jason Bourne's emotional core is intact, despite things that would have broken most men. I guess that's probably why most men would like to be James Bond, as he douses his with casual hookups and copious alcohol.

But then, Jason Bourne is not most men.