Heartily recommending Bourbon and Breakfast... though not necessarily together. 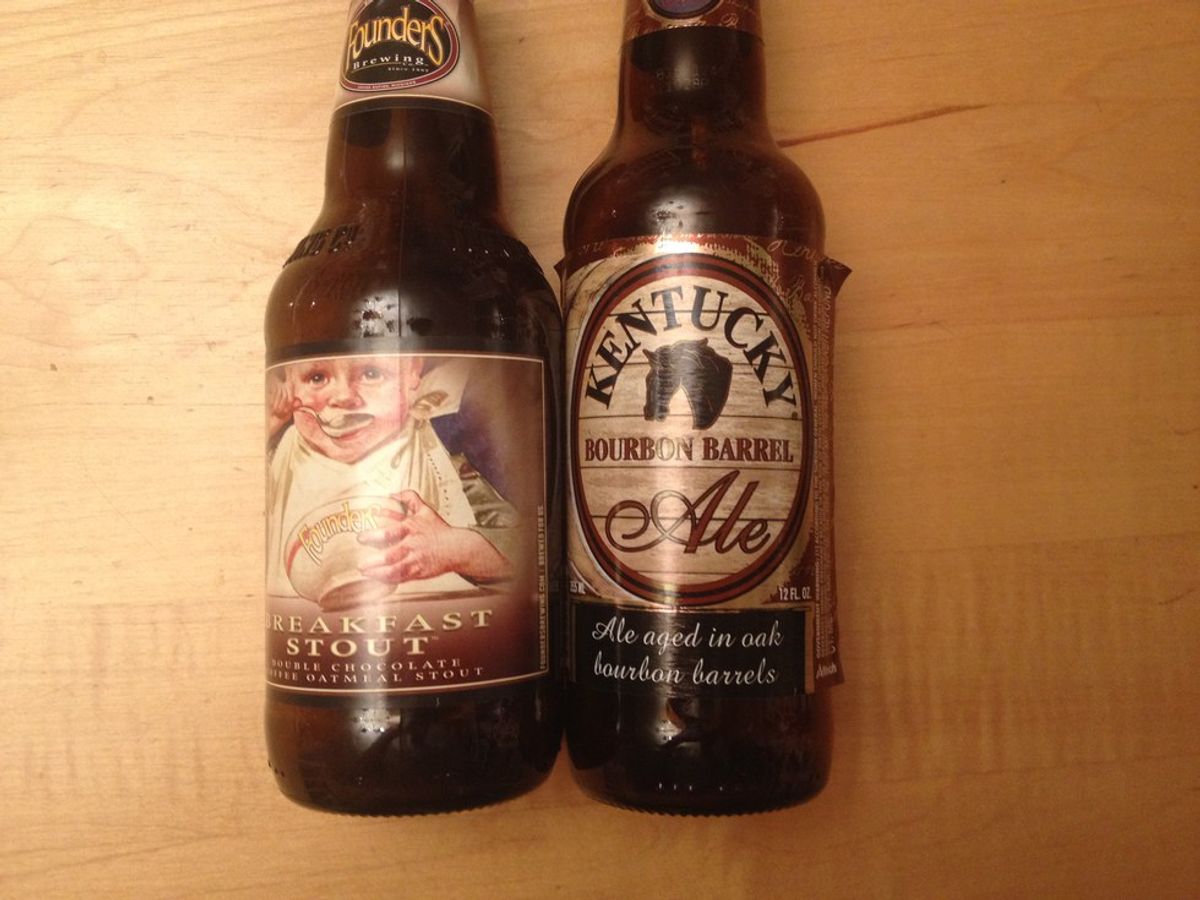 There’s a vast quantity of beers in the country with most states having their own regional brews. In fact, Americans consume on average 20 gallons per person per year, and we here in Wisconsin are more extreme than most. Most Americans, however, don’t think particularly deeply about beer. In America, lagers and their derivatives are overwhelmingly the default brew of choice.

Lagers are far from a poor choice, of course. Their combination of brewing temperature and yeast allows them to be mellow and clear. If beer were bells, lagers would make a crisp sharp sound. They are refreshing to listen to, but they are hardly the only instrument around.

Today, I’d like to highlight two beers that are on the exotic side, despite being made right here in the United States; Kentucky Bourbon Barrel Ale and Founder’s Breakfast Stout.

The first beer, Kentucky Bourbon Barrel Ale by Alltech's Lexington Brewing and Distilling Co. located in Kentucky is about as different from a lager as one can get. To continue the bell analogy, the sound from an ale is several smaller bells of varying pitch in comparison to a lager’s single, clear one. This different effect is created by using a different style of yeast. The ale yeast, as opposed to a lager’s yeast, allows the beer to attain much higher alcohol content – in this case, 8.2% alcohol by volume (ABV).

The Bourbon Barrel Ale was aged in once-used Bourbon barrels, further deepening the unique multi-note flavor that sets ales apart. This Ale tastes of warm honey and vanilla, with a faint bourbon aftertaste. Far from being cool and refreshing, it makes one feel warm and relaxed. The Bourbon Barrel Ale has little bitterness, and its smooth sweetness makes it easy to savor despite its higher alcohol content.

Standing at the opposite end of the spectrum, Founder’s Brewing Company from Michigan produces the excellent Breakfast Stout. Stouts are a dark beer and, in this case, uses oats as the main ingredient versus barley and hops. This beer also includes chocolate and several varieties of coffee…

And it shows. This creamy, malty brew has a strong, rich coffee taste with deep, dark chocolate undertones. With its 8.2% alcohol by volume (ABV), this beer has kick and is immediately apparent. The coffee flavor is strong and clear. Coffee lovers could do no wrong reaching for this beer after dinner. The notes of this beer are deep and rich, with an intriguing mix of the crisp bitterness of beer and the warm acidity of coffee.

Both drinks offer a pleasant and enjoyable diversion from the usual fare we Americans usually find ourselves drinking and have proved to be an excellent companion to dessert. I wholeheartedly recommend both and encourage readers to enjoy responsibly. Remember, there’s a whole world of beer out there waiting to be explored!