A Reminder To Myself After Heartbreak: You Have Always Been Beautiful

A Reminder To Myself After Heartbreak: You Have Always Been Beautiful

I remember three-year-old Anna, decked in denim with an orange in her hand, getting told she was beautiful. And she was. And I am. I think I always have been. 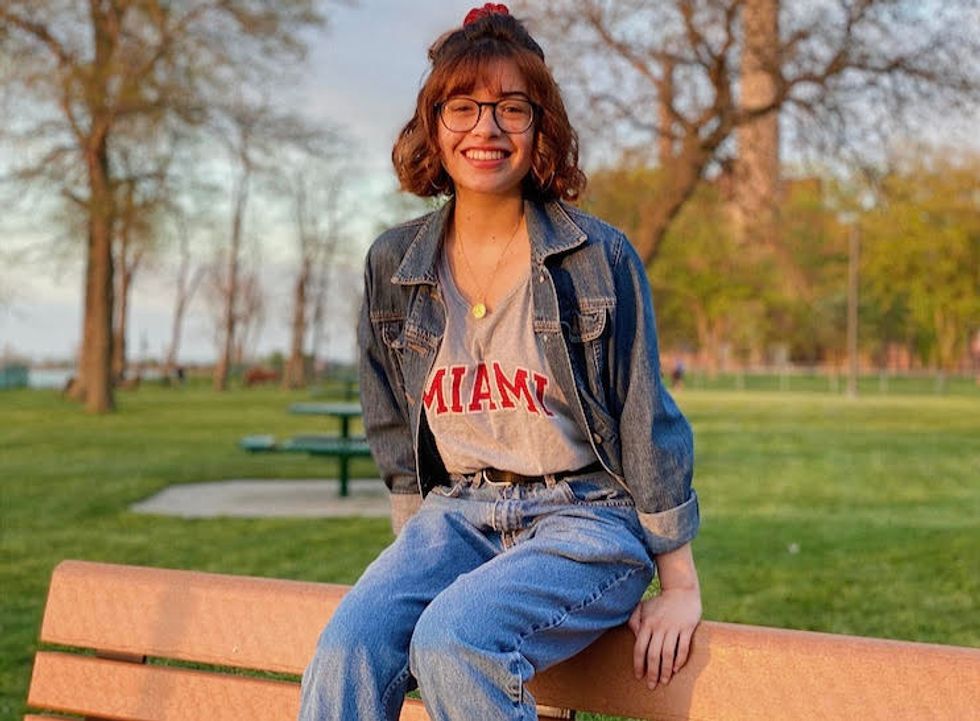 When I was little, my mother used to put my hair in pigtails constantly. She said she was never good at braiding hair, so pigtails it was. I also wore a lot of denim as a child; a result of being born in the 90s I assume, and a fashion choice I have not yet grown tired of (as pictured). In one of my earliest memories, I am wearing pigtails and a denim jacket. My hair is beautifully combed, and I am dressed head to toe in clothes from The Gap.

I had an orange in my hand. I don't remember why. I was only three or four years old; my little fingers were incapable of peeling an orange. Still, it stayed in my hands. I was in the arms of a young woman. Her hair was as dark as mine and was neatly swept into a low bun. Her face was shiny and her eyelids glittered a brown, copper color.

My parents had taken me to Italy. My mother tells me I dressed up as a princess to visit all the museums and we rode on a train, but this is the only memory I have of the trip. We were in the lobby of the hotel, getting breakfast (hence the orange). Two women who worked at the hotel came over and one picked me up.

With the orange still in my hands, she bounced me up and down on her hip, speaking to me in Italian. At three, I was already more impressive than high school students trying to learn a language and was fluent in both English and Spanish. And even at three, I understood she was not speaking to me in one of my languages, but I still understood what she said. As she smiled at me and I bounced on her hip, clutching at my orange, trying not to drop it, she repeated one word over. "Bella, bella." Beautiful.

You'd think that would be the birth of a crazy big ego, right? One of my earliest memories is a total stranger telling me I'm beautiful. But no, the memory was forgotten as soon as it was created. I remember thinking not about the compliment, but wondering why my parents were allowing her to hold me, and of course, when I would get to eat my orange.

Memory is a funny thing. I've never been good at remembering things, especially my whole childhood. It comes back in flashes; sometimes it's muddled, two or more memories blended together. Others are more clear, like this one. And for all of them, I never know if I am remembering in English or Spanish.

I think you forget about memories until you need them again.

After I was told I was beautiful at three, I never gave it much thought. Growing up, I thought 'beautiful' was a word to describe a grown up, that I'd be beautiful when I was older. Then I got older. I've never been hit with a moment where I thought, "I'm not beautiful," but only because I never thought it was so important. I have been hit with plenty of moments where I thought, "I'm not smart, I'm not brave, I'm not enough," but never "I'm not beautiful."

But when you get your heart broken, you start to rethink everything, right? My mental health was blamed for the end of the relationship, and for the first time in my life I thought, "Someone's perspective of me...changed. I am no longer beautiful to them." And boy let me tell you, that hurts. To doubt something about yourself you never used to think of to begin with? Ouch, is all I have to say on that.

Soon after that, the memory popped up again. Three-year-old Anna, decked in denim with an orange in her hand, getting told she was beautiful. And she was. And I am. I think I always have been. What a wonderful thing to remember about yourself.

You have always been beautiful.