Be Thankful For Your Roommate
Odyssey

Be Thankful For Your Roommate

Although we can get annoyed with each other, Cicy, I hope you know how much I love you 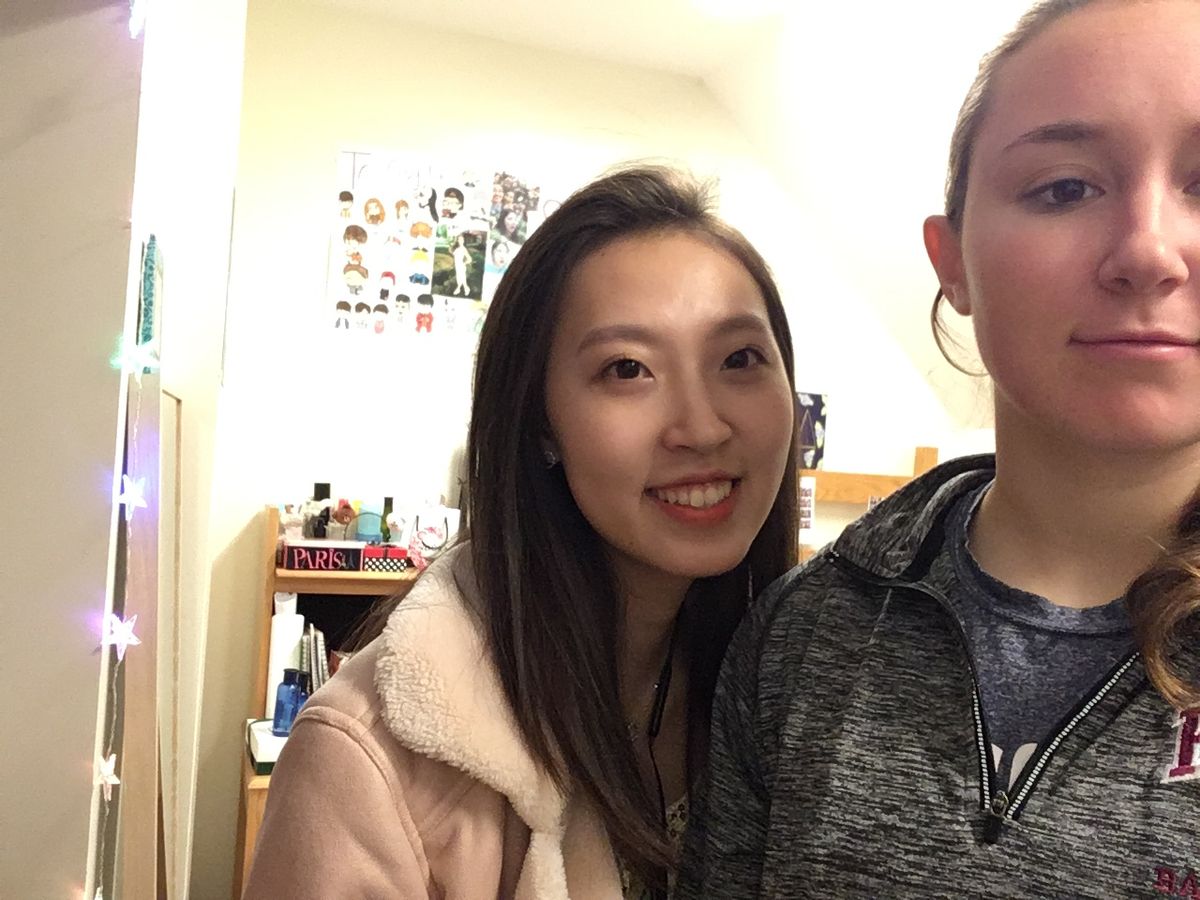 Throughout college, there is a large chance that you will have more than just one roommate. I've been lucky, my freshman year roommate was great, but we decided to go our separate ways as we made different friends.

I got to know my roommate this year more through an interview that I did. I wanted to know more about her life before she came to America, and what it was like when she did come here. Although I don't think you need to do an interview in order to get to know your roomie, I do think that getting to know them very well is an important and enlightening experience.

Xixi “Cicy” Lu is a 20-year-old sophomore student at The University of New Hampshire. She was born in Harbin China, a large city about 2 hours away from Beijing. Lu moved to Cambridge, Massachusetts when she was 12. When asked what it was like to move to America, Lu said, “It was difficult to move because I originally did not understand any English.

Everything was very confusing, I didn’t even know what the word ‘pharmacy’ meant. I did not really want to move here, because in China if your dad is in a place of power, there are people that take care of everything for you. For example, I had a chef, a driver, my own tutor etc. You did not have to be independent. However, their academics are really stressful, you have to study from 7 in the morning to 4 in the afternoon. My mom wanted to move because she wanted me to gain independence.”

Lu started seventh grade at what was formally known as Tobin Middle School in the middle of October, “The school flow is very different, in China the teachers the rotate. But here the students rotate through different classes. I did not understand anything when I first started school, not what the teacher was saying and also not what my peers were saying. Here school gets out earlier and also you have recess!

We did not have that, we also did not have cafeterias, a guy would bring us lunched boxes to our classrooms, we never really left the classrooms. It is really independent in America and I like that a lot.”

Lu had a difficult time learning English, and her mom noticed this, “My mom put me in a summer school program to learn English, and I learned a lot from playing with other people because they were fun classes like cooking. It wasn’t just the general courses. It was fun!”

When asked about making friends Lu said “Making friends in middle school was very hard, I did not know how to communicate well so I barely had any friends. Then in high school, it was easier to talk to people because of the summer school program. I joined a school dance team and that helped a lot. When I got out of the ESL classes my junior year, that’s when I made the most friends because I could speak English way better.”

Lu’s journey did not end there, she moved to Woburn, Massachusetts after her high school graduation because her mom wanted to move to a town rather than living in a city. That is also why she chose to come to UNH, it is more town oriented rather than city like.

Lu’s Dad still lives in China, while her mom is here in America with her. When asked what that is like Lu said, “I never really got a lot of fatherly love from him, although it is not his fault because in China the man has to work and the woman has to take care of the child.

He missed my high school graduation because he was working in China. We still have a close relationship as we talk a lot but I miss my dad. I wish we can come together, I wish he was here. The image of a father is distorted because I am not able to see him almost ever, and even before he was always working.”

Despite the difficulties she has had to overcome, Lu likes living here. She likes the American culture and when she went back to China two summers ago, she felt out of place, “My home is here now.”

Listening to Cicy talk and share her story made me feel the utmost respect for the difficulty of moving and the difficulty of not having her dad around. When she said that her home is here now, I felt a sense of relief that despite all the struggles she went through and is currently going through, that experience ultimately resulted in happiness.

Moral of the story, be thankful for your roommate/best friend and get to know them on a deeper level.