Bangtan Boys And The Music They Create
Odyssey
CurrentlySwoonLifestyleHealth & WellnessStudent LifeContent InspirationEntertainmentPolitics and ActivismSportsAdulting
About usAdvertiseTermsPrivacyDMCAContact us
® 2023 ODYSSEY
Welcome back
Sign in to comment to your favorite stories, participate in your community and interact with your friends
or
LOG IN WITH FACEBOOK
No account? Create one
Start writing a post
Entertainment

Bangtan Boys And The Music They Create

How a seven member group started from the bottom and rose to the top. 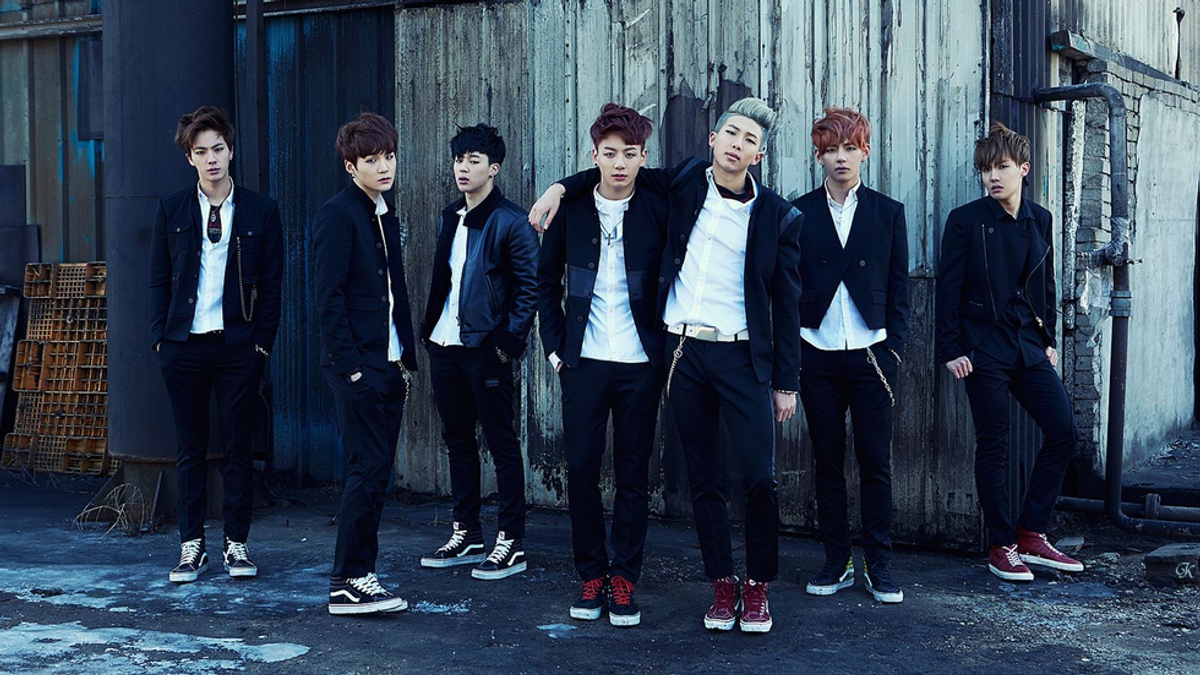 Two weeks ago, the 2016 Mnet Asian Music Awards (MAMA), arguably the biggest music award shows in Asia, took place. The Asian equivalent to the Grammys, MAMA was filled with six hours of musical performances and award recognition. Many viewers would watch the show in anticipation as several K-Pop idols and their groups had a chance at snatching an award or two. But three awards seemed to stand out more than the others: Artist of the year, song of the year and album of the year. These “grand prizes," or Daesang awards, have so far only been claimed by artists from YG Entertainment, JYP Entertainment or SM Entertainment. These companies, known as the Big Three, dominated MAMA throughout its 17-year history. Rarely -- if not ever -- did an artist or group from a smaller company ever win a Daesang award.

That is, until this year.

Bantang Sonyeondan, or BTS (Bulletproof Boy Scouts) for short, claimed both the award for Best Male Dance Performance and Artist of the Year. An idol group created by Big Hit Entertainment, BTS creates and produces different genres of music that range from hip-hop, R&B, trap and K-pop. Like other successful K-pop groups, they also have fans around the world. With their unique choreography and many self-written songs, the group that started out small is growing into a global phenomenon. Almost immediately after they released their recent album, "Wings", BTS became number one on iTunes for top album charts.

BTS consists of seven members, each with a distinctive role. However, a few members also proved to have talents beyond their positions and also use them in the group’s performances. From oldest to youngest, Jin, is a vocalist and visual of the group. Then there's Suga, who formerly was an underground rapper called Agust D. The leader and main rapper, Rap Monster, is also a underground rapper, who went by the name Runch Randa. The third rapper and lead dancer, J-Hope, follows behind in age. Jimin, the main dancer and main vocalist is known for his high scales and choreography alongside J-Hope. V is another vocalist who recently debuted as an actor. Finally, Jungkook is known as mainly a singer but is also a dancer and rapper. Bang Si Hyuk, CEO of Big Hit Entertainment, revealed in an interview that the group was created after he listened to Rap Monster perform. This caused Bang to create a hip-hop idol group where members both wrote and produced their own music.

Although a smaller company outside of the Big Three means a lower chance of becoming globally recognized, BTS used it to their benefit. BTS is known for not only writing their own songs, but also focusing on themes like bullying, mental health and millennials. In a society where we are becoming more aware of such issues, and songs about with similar themes are becoming more common on the radio, BTS is able to follow the trend without worrying about reputation.

Even in "Wings," where each of the members get to write their own songs, mostly wrote about subjects outside of love and other topics like self-love, experiences with music, and even about their own mothers. Other songs in their album also talk about struggles with passion and female empowerment. Although some of their previous songs have led to some controversy, the group continues to have control over their writing.

Their most well-known albums that catalyzed their quick rise in fame, "The Most Beautiful Moment in Life" Parts 1 and 2, have become known for their music video cinematography. "Dope," their most viewed music video, has over 115,000,000 views and is known for its rather jazzy tune and complex choreography. The song itself is about individuals who are willing to work hard for their dreams. In the video, each member dresses up as career men to further imply their dedication to their long hours of work. Their pyrotechnic-filled music video "Fire" struck a cord with an equally impressive 86,000,000 views. "I Need U" and "Run" also display some impressive cinematography. Fan theories see a connection to these rather somber music videos and many claim that other music videos of BTS are connected with one another.

Besides working long hours with little pay and constantly having to maintain their appearances and work with people they don’t always like, being an idol also means rarely seeing family and friends outside of work. Although some idol groups get along with one another, in many cases members despise each other off-camera. In BTS’s case, like many other idol groups, they were criticized for having “big dreams” of winning awards and becoming internationally acknowledged. That would naturally discourage anyone to even work for their dreams.

Yet despite all this, BTS continues to do what they can and help one another achieve their goals. Members help out one another out at practice and even give advice. In a lot of cases, even before they debuted, members used to comfort and openly talked about their problems with one another. Behind the scenes clips of the boys showed them comforting one another and openly talking about their concerns.

A recent example was given by Suga after BTS received the artist of the year award. He explained his reason for breaking down on stage was because of a memory. The memory was of him and another member spending their nights on the balcony crying and talking about whether they will be able to make it big. When it came to giving advice and improving each other’s skills, J-Hope is often seen helping members with their choreography. In a message written by a fan who watched the group’s performance at MAMA, the fan pointed out how the group was willing to trust one another. Two of the members were given rather difficult tasks during the performance. Jungkook was hung several feet above the ground as the opening while Jimin had to dance blindfolded for the beginning of the performance.

The constant push for help from one another and drive to continue led them to exceed the expectations of their critics. Rap Monster was placed in Spin’s 50 Best Hip-Hop Albums of 2015. Suga’s mixtape Agust D was also featured on Tumblr’s 2016 Top Album list. Rappers like Wale have given shout outs to the band. Gallant even met the band in person. YouTube celebrities like iiSuperwomanii have also referenced them in their videos, and other artists like Troye Sivan have retweeted the group. Thanks to "Wings," the group also earned their spot in Billboard's top 200 albums.Although many critics still consider BTS as less than decent and do not see any value in their recognition and achievement, I see all this recognition as really good progress. They have the "it" factor. It’s possible that they will aim far with their skills and dedication.

Like all the other fans, I wish BTS the best and congratulate them on their latest achievements.

Nicole Marie Nigro
Individual Creator
8465
c1.staticflickr.com
Where to start...... Let me start with the cliche that life throws us curveballs and what we do with it is what counts.