"They're coming to get you, Barbara!" -John from "Night of the Living Dead" 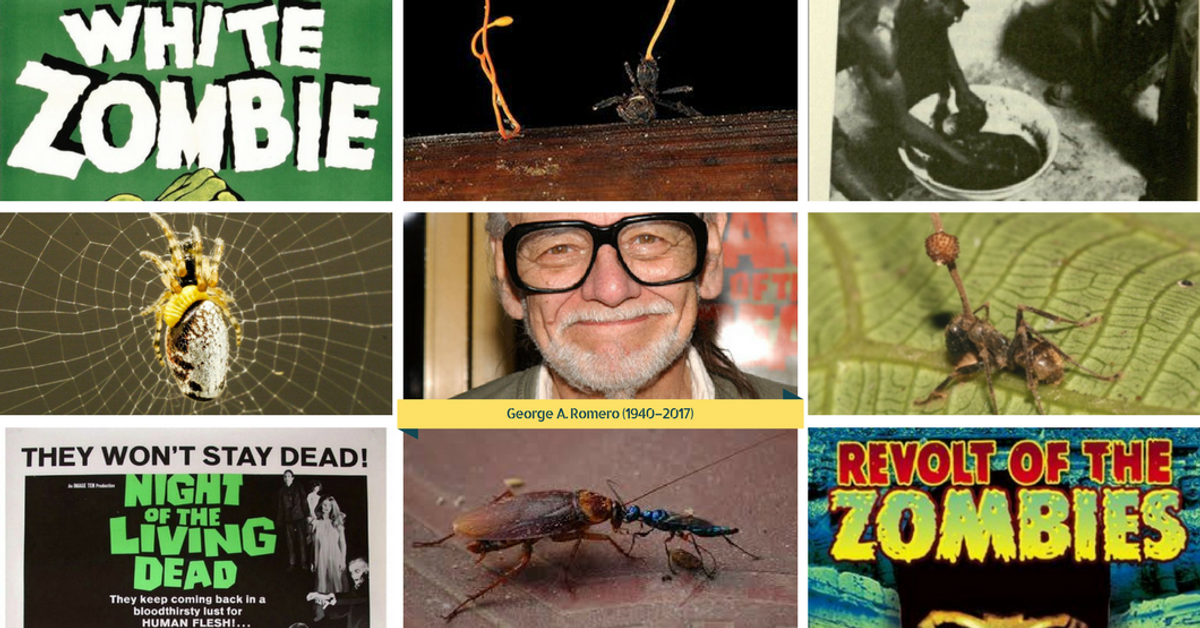 Per English Oxford Dictionaries, the term zombie is a word from West African that came to light in English in 1819. The term could have originated by the word zumbi (meaning fetish) and nzambi (meaning a god). The terminology is referring to a snake-god in the Voodoo religion.

Robert Southey’s book, “History of Brazil,” gives us a name of Zombi. In Angolan language, the term is a name for a deity. In his footnotes, he mentions the word NZambi, meaning deity.

Per Michigan State University’s Anthropology Department, zombies date back to the 8th century. The term nzambi means, ‘spirit of a dead person.’ In Louisiana Creole / Haitian Creole, the term zombi means, someone who’s died and brought back to life, with no free will, or the ability to speak. The Bokor can bring the dead back to life via coup padre, a powder, in which you use orally. One of the main ingredients in the powder is tetrodotoxin (poison), found in the puffer fish and in some species of the porcupine fish (Madeline, 2014).

Per Florida Museum of Natural History, the term zombi is a person who the community and/or family finds annoying and no longer wants to live with. The family hires a Bokor to turn the annoying person into a zombi, who stays under the Bokor’s power until the Bokor death. An ethnobiologist name E. Wade Davis went to Haiti and spoke to a person who was a zombie. The doctor learned that the recipe for poudre zombi had the ingredients of the porcupine fish, sea toad or a puffer fish.

Back to Michigan State University’s Anthropology Department, the article theorizes that zombies were decapitated, and/or had their brains removed. There are rumors of the Mayans being destroyed by a zombie invasion. Syria, people buried their bodies intact and were later dug up to destroy the skulls. Having a gravestone placed over a grave like a blanket was to stop the dead from rising. Could these rumors be the driving force behind the Hollywood zombies?

“White Zombie,” starring Bela Lugosi and directed by Victor Halperin (who also brought us “Revolt of the Zombies.”) is the first “zombie” movie. There have been other zombie movies, such as “Ouanga” and its semi-remake “The Devil’s Daughter. Most of the earlier films dealt with the zombies via Voodoo, atomic power, or aliens. In 1968 one movie changed it all and became an icon for future movies and television shows.

On July 16 of 2017, my Facebook feed blew up with announcements of the death of the ‘godfather’ of zombie movies and horror icon, George Romero (1940-2017). He started his filming career filming commercials and short films. He, along with some of his buddies, formed “Image Ten Productions,” which brought us the movie that would change how Hollywood, and movie goers of America, viewed zombies, “Night of the Living Dead.”

Per New York Times, critics deemed “Night of the Living Dead” ghoulish and silly. In 1999 the movie made it into the National Film Registry. Per L.A. Times, George Romero used a team of tv-commercial producers to distribute the film. The small team did everything that nowadays takes a slew of people to handle. The theory behind the film taking off might have been due to the socio-political messages. A part written for a Caucasian became a part for an African American. Other horror movies focus on one creature, but “Night of the Living Dead,” is a symbol of mind control or brainwashing.

George Romero’s work as inspired movies like, “REC,” “World War Z,” “28 Days Later,” “Zombieland,” “Shaun of the Dead.” Even though he was not a fan, would “The Walking Dead,” or even video games (Resident Evil, later the movies and animated series), along with other zombie movies be here? His son, George Cameron Romero is a producer, director and a writer with his own zombie movie and a short zombie film. Will he take over his father’s place?

Before you close your eyes, a little warning. Per National Geographic, some parasites can ‘mind-control’ their hosts. The Costa Rican wasp larvae can control an Orb spider into making a cocoon for them, which they use after they kill and eat the spider. Cockroaches become zombies when a jewel wasp is ready to procreate. The wasp finds a cockroach and uses it as a nursery. There is a flatworm that starts off in the liver of a grazing animal; the eggs excrete via their host’s feces. Snails eat these eggs and then coughs them up forming a mucus over the eggs. Ants come along and consume the eggs, which the flatworm hatches, makes its way to the ant’s brain and takes over, forcing the ant to a blade of grass so a grazing animal can eat the ant and start the process all over again.

Per IFL Science, some Fungi can control ants. A Fungi named Ophiocordyceps genus uses the ants to find ideal conditions to grow. The fungi can manipulate its host to abandon its home and seek out ideal conditions. A parasite, Toxoplasma gondii is found in 22% to 84% of the human population (IFL Science). The parasites are in rodents and can manipulate their behavior. To complete the cycle, the cats capture the rodents. Rodents run from such predators, but the parasites manipulate them into not fearing the predators. The parasite can infect humans (Berdoy, Webster, and Macdonald. 2000).

Something for you to lie awake at night to think about, do you believe a zombie apocalypse can happen? If so, how would come about? Humans and Science? New species of parasites? Or, something from space?