Art of the Scene: Do Lung Bridge (Apocalypse Now)
Odyssey

Art of the Scene: Do Lung Bridge (Apocalypse Now)

An outpost that's straight out of hell, see how Coppolla created such a striking scene. 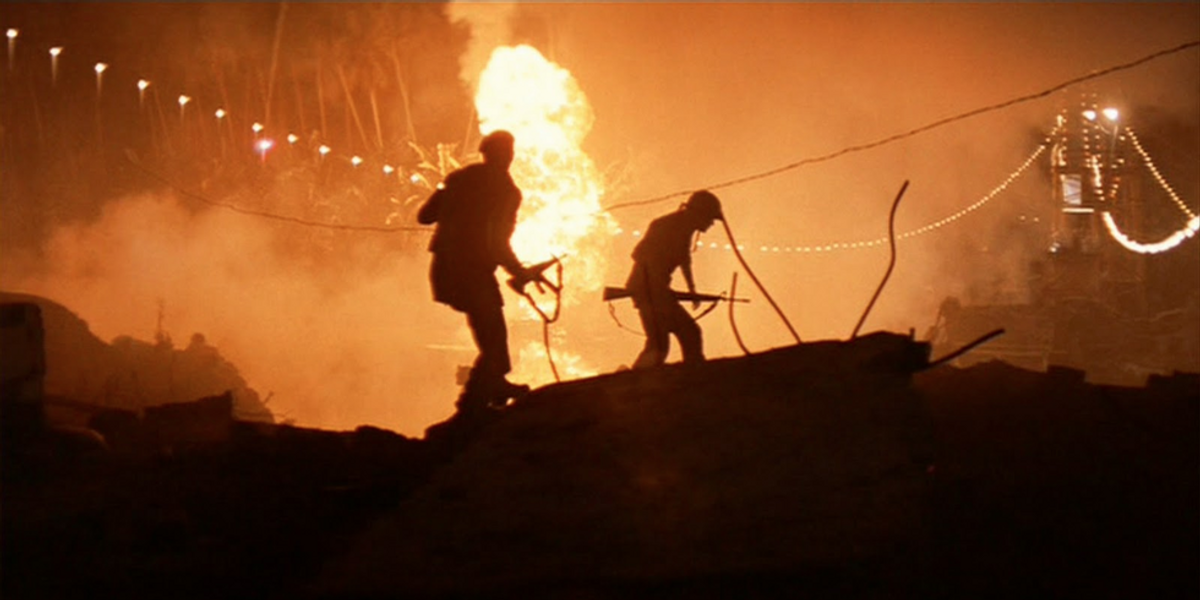 The three major scenes in Apocalypse Now that convinced it me that it was a cinematic masterpiece were the Ride of the Valkyres, Kurtz's death, and the Do Lung Bridge. The first two scenes are very famous with certain shots such as the helicopters riding in sync, Colonel Kilgore's "I love the smell of Napalm in the morning", and Willard's head slowly rising out of the river near Kurtz's temple. But the Do Lung Bridge scene has enough great cinematography, dialogue, and metaphorical weight that most directors today wouldn't be able to dream of such a great sequence. The clip below shows the 6 minute scene which I'll be analyzing from start to finish.

The scene opens with Willard's commentary on what the Do Lung Bridge is, the last outpost on the river before entering Cambodia, or Kurtz's territory. From the start we get a shot of this seemingly fragile bridge with fire, water explosions, and flares riddling around it... this is clearly not a safe place to stop. Then we cut to Lance and Chef mentioning how Lance has just dropped acid, this is important as director Coppola capitalizes on this to give the whole scene a psychedelic/surreal atmosphere.

The crew now looks to their left to see desperate soldiers wading through the waters to get on the boat. Their screams of "Take me home!" and the wrecked helicopter near the shore now gives the crew a sense of impending danger. Clean looks back with an unsettling demeanor as the distressed soldiers now curse the crew for abandoning them. This is a metaphorical trip to the Underworld. As Charon guides a hero through the river to Hades on his boat, the souls of those who are stuck in this form of purgatory reach out and scream to them to take them back... back to the living.

The viewer gets more and more indications of the impending danger as an officer signals the crew to shore and happily runs off telling them they are in a pretty bad place. Willard and Lance decide to get off at the outpost to get some intel and fuel. Notice how Lance grabs the newly acquired puppy as they get off the boat.

Now the next moment where Willard and Lance cross through the bridge to find the trenches is probably one of my favorite shots in the whole film. The only sources of light are fiery explosions, flares zipping through the sky, the Christmas lights encompassing the bridge itself, and a searchlight constantly shifting around. The sounds of disembodied screams, carnival music, laser beams, and explosions create an aura of madness. All of this alongside a setting that feels destroyed with rebar sticks jutting out of the ground, fires in the background, and a seemingly uneven terrain fabricate the atmosphere of a post-apocalyptic wasteland rather than a war zone. Lance at one point plops the gun on his shoulders and stares at the madness... in a trance. This reflects man's incline for violence and destruction, we would like to believe that man strives for peace but when it comes down to it humans love playing war. A perfect example of this is how people would much rather see an action flick over any dialogue heavy story that doesn't include a fist fight or two.

Lance proceeds to jump down into the trench with Willard to find the commanding officer where a soldier is screaming his head off about a man named Beverly Hills. This is the first inclination that clearly the inhabitants of this Outpost have gone mad from the apocalyptic atmosphere. Willard and Lance then walk through a bunker where four men sit indifferent to the chaos going on outside, rock music plays in the background as Christmas lights remain the only illumination in the room. These men have clearly given up on the war and their own safety, another response many would have if put in the same situation.

Lance walks through the trenches and steps on another soldier he thought was dead for some comic relief and to make the scene continue to feel even more manic. Lance's puppy is seen holding on dearly to his clothes, a reflection of his innocence now visibly outside of his body.

Lance and Willard now stumble upon two men firing a massive machine gun at the "enemy" on the other side. The soldier manning the gun curses wildly while unloading rounds into the tiny slot created by the sandbags. His shots seem to go unanswered as the screams from the opposing Vietcong continue. Willard watches these men with an air of confusion. When asked where their commanding officer is, the soldier on the gun thought that Willard himself was the man he was looking for. The lawless wasteland of the Do Lung Bridge continues to surprise Willard. Note how Willard's face seems almost covered entirely in darkness and when Lance stands up he is engulfed by the searchlight. This over and underexposure of lighting makes the whole scenario feel unreal... almost dream-like.

Lance finds himself again climbing above the trench and staring out at the havoc ensuing in front of them with the searchlight glaring directly at him. The soldiers call for another man named "The Roach" who is in a coma-like slumber as it takes several tugs and yells to wake him up. The soldier with the glamorized grenade launcher has the name "Roach" primarily because that's probably one of the only animals that could survive in a post apocalyptic world. Willard catches Lance out in the open and yells at him so he ducks down. Willard's scream almost feels out of place as Lance didn't seem like he was in any present danger.

Willard watches as Roach, half-awake, walks over to the men. His responses to gunners questions give him an almost omnipotent aura. Even the camera has a low angle of Roach as he becomes the dominant figure in the shot. Roach doesn't need a flare and he knows exactly where to adjust his launcher to hit them. After Roach fires the shot and the subsequent explosion is heard... the curses from the Vietcong are silenced.

Willard then asks Roach if he knows who's in command here...

He then walks away, back to where he was first found to probably finish his interrupted sleep.

This scene highlights how film is such a powerful form of art and expression. Coppola created this hellish landscape to purposely serve as the final threshold, a point of no return for our protagonist before he enters the world of Kurtz. The madness of war is perfectly captured in this surreal, apocalyptic outpost as Willard searches for some form of authority in the Do Lung Bridge. Little does Willard know that he is slowly entering the mental world of Kurtz through these unnerving experiences on this mythical journey.

Caitlin Marie Grimes
University of South Florida
10086
Beyond The States