A Basic Girl Reflects On Studying Abroad
Odyssey
CurrentlySwoonLifestyleHealth & WellnessStudent LifeContent InspirationEntertainmentPolitics and ActivismSportsAdulting
About usAdvertiseTermsPrivacyDMCAContact us
® 2023 ODYSSEY
Welcome back
Sign in to comment to your favorite stories, participate in your community and interact with your friends
or
LOG IN WITH FACEBOOK
No account? Create one
Start writing a post
Travel

Yep, Another Post About An American Girl Reflecting On Her Time and Studies Abroad

I don't know exactly what I did to deserve it, but I recently became part of a highly misunderstood, marginalized, and dare I say, stigmatized community. Quite frankly, I think it's completely unfair.

What did my fellow basic globe-trotters and I do to deserve such judgment? It's not as if the majority of our parents had a large part in allowing our travels to happen. It's not as if my parents fully supported me financially after I blew through my waitressing savings as if my ATM card was invincible in the first month of being away.

Some people simply don't realize, gallivanting around Europe (or any other far-flung continent) is seriously strenuous work.

I felt especially misunderstood while I drank from my bottle—I mean "glass"—of French wine (sorry, Mom and Dad) under the Eiffel Tower, or while I ate Dutch pancakes on the canals of Amsterdam, or while I gazed wistfully over the city of Barcelona from Bunkers, or while I lounged in the thermal baths of Budapest. Don't even get me started on the pangs of judgement I felt while I enjoyed a pint of Guinness from my favorite Irish Pub in Ireland, or while I sipped tea at a fancy afternoon tearoom in London, or when I danced on the tables at Spring Fest in Munich with all of my friends. You get the picture.

People who make assumptions and judgments tend to forget we went abroad to study. Perhaps one of my most stressful assignments involved lounging in the local park in Dublin and observing the difference in culture. My workload was tough to manage. True story! Yet the judge-y, not-travelled-abroad-to-study Twitter community often fails to recognize the genuine hardships that we studying-abroad students had to endure during our time away and continues to have loads of fun putting us down. Some of these judgmental people really made me feel personally victimized. See below: 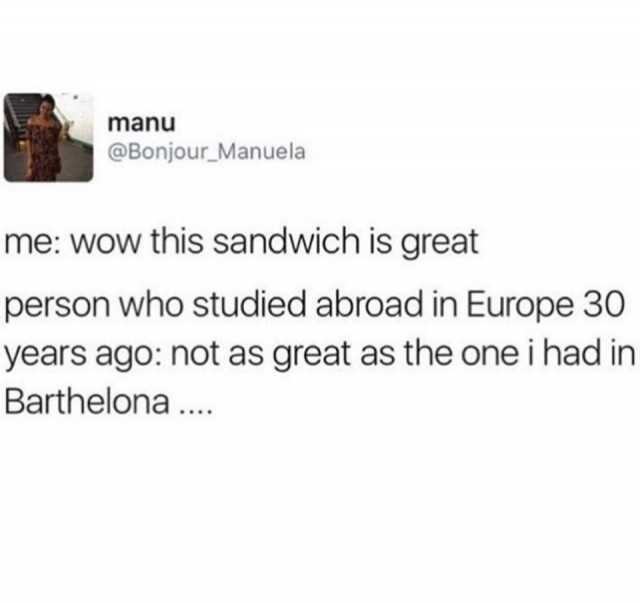 It may have appeared effortless, but I personally worked very hard on posing for pictures in front of the most monumental landmarks of the countries where I visited, not to mention the incredible thoughtfulness I put into each and every one of my Instagram captions, too. I would greatly appreciate if the mean-spirited Twitter community would stop kicking a girl while she's already down. It was a tough few months.

Honestly, maybe poking fun at the life-changing experiences I had in Europe is rooted in my desire to troll the trolls who like to blather on Twitter.

Or maybe, just maybe, it's a coping mechanism to not avoid dealing with the fact that I am no longer like the super-glamorous monkey posing on an elevated surface in Barcelona. Maybe, just maybe, that's why my editor gave me a kick in the butt and told me to write an article about my overseas experiences, because my lack of submissions was due to the fact that I couldn't find the words to say about what I learned, saw, ate, drank and did in Europe.

And if I do decide to fully delve into that suppressed pool of emotion lurking deep in my subconscious, someone needs to run me to the nearest therapist.

I'll probably never transcend the stigmatized community of people who've travelled abroad and fully identified with every stereotype and misunderstanding meme that every Internet troll has thrust upon us. Maybe I will start too many sentences with, "When I was in Europe …" Maybe I'll be one of the brave ones who decides to move back to Europe after graduation (not that I've already started job hunting in London or anything.) In the final analysis, I wouldn't change a thing about my experiences abroad. Finding the perfect words to say anything beyond that is nearly impossible. So, if you get the chance to study abroad and join me and the monkey on the wall of cringe-worthy posed-poses on every elevated surface in every gorgeous monumental landmark in Europe (or anywhere else overseas), by all means, join us in this adverse-filled, misunderstood community. It's the best decision you'll ever make.
travel
Report this Content
This article has not been reviewed by Odyssey HQ and solely reflects the ideas and opinions of the creator.

An Open Letter To The Friend Feeling Left Out...You Will Find Your Place

10 Complaints You'll Hear From Every Driver In Tallahassee