All The Women In Me Are Tired
Odyssey

All The Women In Me Are Tired

Women, let's have a unified voice in this election. 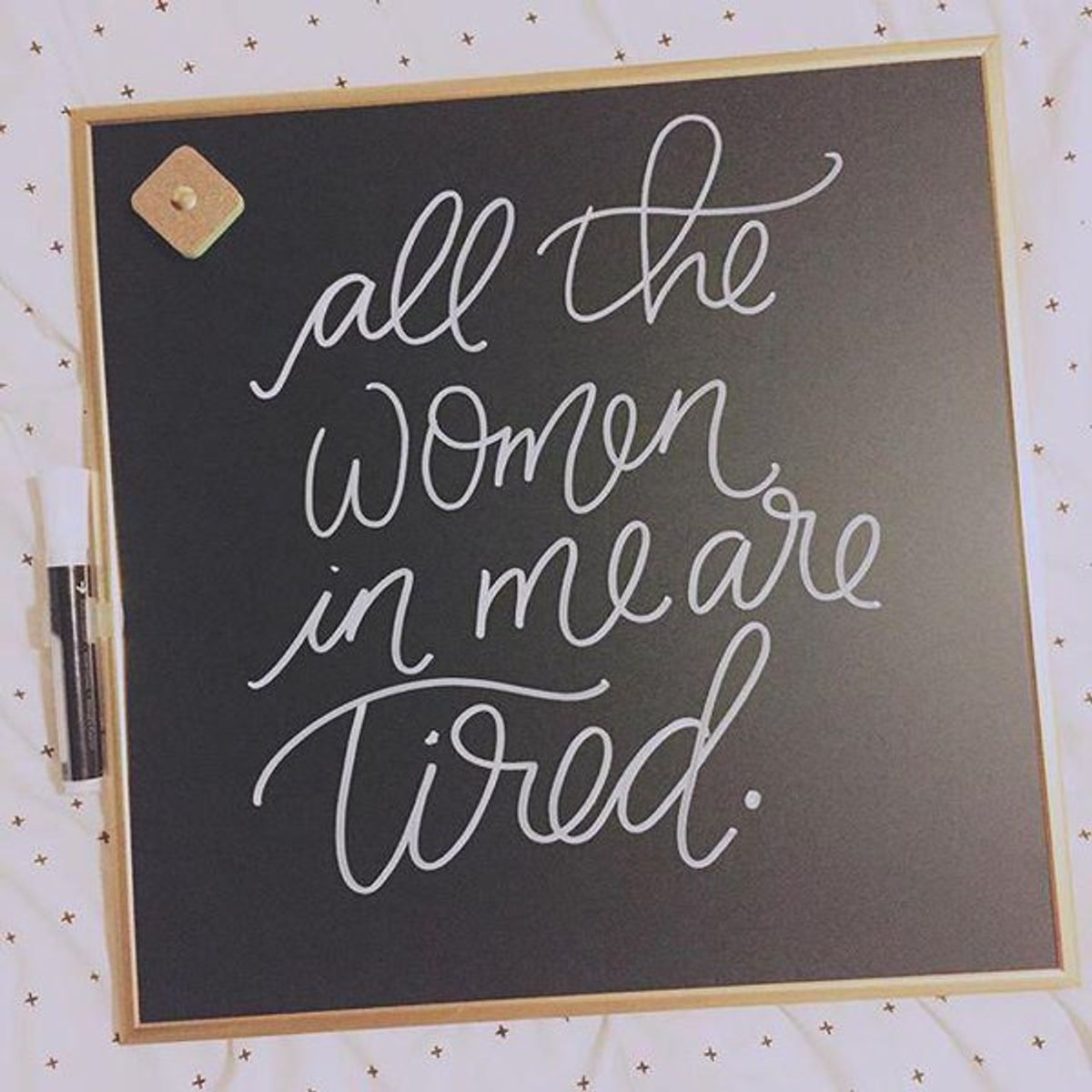 All the women. In me. Are Tired. When I stumbled upon this micro poem by Nayyirah Waheed, it resonated with me. And it’s a shame that it resonated with me. As I become older and more tuned in with the world around me, I realize that it’s a world where women come second. While women have of course made great strides throughout history to earn their rights and equality, these strides are becoming steps, especially looking at the current state of the 2016 Presidential Election.

Donald Trump is a sexist, misogynist, racist, and xenophobic man loved by around 50% of Americans. That’s right, ladies! Half of the citizens of this great nation do not care about how you are treated. And shockingly, many of these individuals are women. Does it make sense? No, of course not! But it’s happening.

A quick Google search of “degrading things Donald Trump has said about women” gave me a heart shuddering 752,000 results. Within these results, many of the articles featured the holy trinity of Trump misogyny: Fat. Pig. Slob. It seems that Donald Trump only has a vernacular of one-syllabled insults that he can fling at unsuspecting women who dare criticize or even look at him the wrong way. This outrage towards a particular type of woman, who dares to go against his policies, demeanor, actions, infidelity, or challenges him in any way, gets categorized into one of these three lovely descriptions. She is too thin or not thin enough, too outspoken or too silent to ever take charge in a professional career. If she ever wants to be in charge of her reproductive rights and consciously get an abortion, she should be “punished.” If she ever tries to run for office, she better have the right “face” for the job. (Side note: does Donald Trump own a mirror? Like does he know he looks like a melting racist orangesicle? Or a swollen Tan Mom after a zillion wasps swarmed her? Remember Tan Mom? Okay back to the article).

I guess the thing that really shocks me is that there are smart, educated women out there that will be voting for Donald Trump this November. I just can’t wrap my head around the fact that American women are out there campaigning, supporting, and celebrating a man who insults the female race at least once a week (if we’re lucky). What happened to being a "girl's girl?" Do they just not care? Are they so dead-set on voting Republican that they ignore all the heinous remarks? Are they educating themselves about the nominees and what they will do for them? Are they just completely unaware of the things he says? In case they are, here are just a few direct quotes highlighting our potential president’s ideals:

-Talking to a Celebrity Apprentice contestant: “It must be a pretty picture, you dropping to your knees.”

-“You’re disgusting.” This was when his lawyer asked if she could breast pump for her newborn baby while she was working.

-When asked what her daughter Ivanka would do is she was sexually harassed in the workplace: "I would like to think she would find another career or find another company if that was the case."

-Speaking of Ivanka, let’s get the creepiest quote ever!: “If Ivanka weren’t my daughter, perhaps I’d be dating her."

These are just some of the quotes, because I am too disheartened and disgusted to keep reiterating them. When asked for follow-up on many of his quotes, Trump merely responds with "It was just a joke.” But the joke isn’t funny, and it really never was. And you know what? I’m tired. I’m sad that I had to take the time to write this article. I shouldn’t have to defend my sex and beg for women NOT to vote for someone who just doesn’t see us as equals, who doesn’t care about us, who judges every physical aspect of women while looking like a huge rotting apricot. Women are still expected to be all things while this man isn’t even one good thing. We don’t deserve it. It is an injustice to women everywhere that we have let a man like this potentially become our president. And we have to do everything in our power to not let this frightening fantasy become a menacing reality. We have to think of the society we want our daughters, and our daughter's daughters. to grow up and thrive in. We are nothing without our voice, so while I am a tired woman sick of pleading my case, it is my duty to trump the sexism that prevents me from living my fullest life and being a proud American citizen.