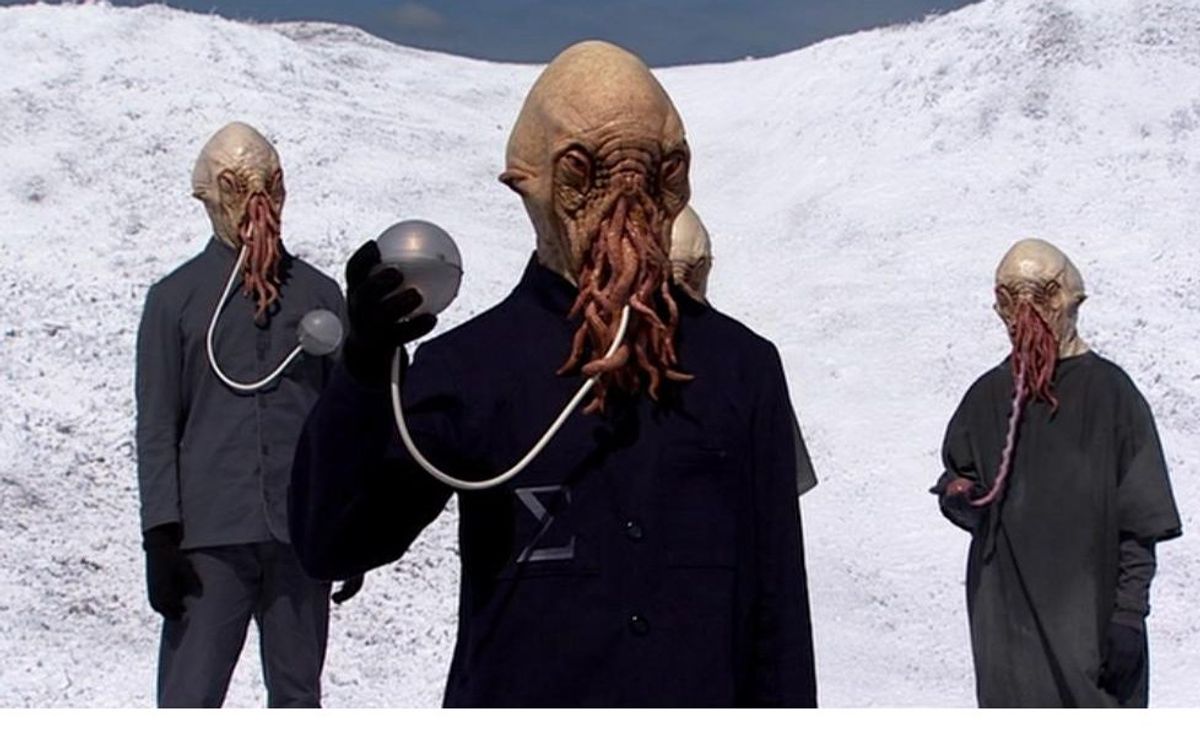 A team of extraterrestrial researchers from the planet B422 have been in the process of developing a new abduction procedure for the past 20 years, and are now nearly ready to unveil their technique.

Two star-days ago, Pajoba Hennifax, the lead developer on the project, held a press conference in the Universal Confederacy of Sovereign Planets (UCSP) headquarters explaining the project. The research team, a branch of the B422 Scientific Inquiry Committee, released the following statement:

"At the present moment, we are fully funded, but our project requires extensive testing in order to meet the standards in place for the Milky Way system. We are calling for volunteers to test these new methods. Only when we have accumulated adequate subjects can we proceed with the clinical trials."

Following the press conference, recently-appointed UCSP Chair Kalesa Pinnt called a meeting to order, commenting, "With criticism of the UCSP's handling of the ongoing Tattooinian water shortages and the instability of the Alderaan refugee crisis, our organization is proud to be able to fund such groundbreaking research. The current treatment of human's test subjects is, frankly, inhumane."

If successful, this new procedure will be the first of Pinnt's motions as Chair following General Kenna's official resignation last month due to public condemnation following the hearing on his management of the Gallifreyan genocide.

Hennifax stated, "In conjunction with the work of the UCSP Interspecies Rights Task Force, our project is making vast improvements to standard protocol. We believe that our improvements on technique and workplace environment will make non-consensual scientific experimentation much safer for our subjects. Ood and Vulcan human rights activists have been calling for reform for decades, and we are finally taking a step in the right direction. There is no need to involve the Intergalactic Court of Justice."

Anthrobiological scientist and surgeon Jamison Fordt, a senior member of the research team, also hopes that, along with reform, future transparency about abduction procedures will dispel the various myths and stereotypes surrounding the operation.

"Contrary to popular belief," Fordt explained, "subjects do not actually wake up in a tub of ice with their liver missing. That's a myth. Actually, it's the liver itself that needs to be on ice. Only an amateur would put the actual human on ice. Although, now that I think about it, that might be a good idea. Not the ice, I mean—using general anesthetic. It would have to be a human-friendly drug, of course. Overall, the abduction is a safe but uncomfortable operation as it is currently performed. Our goal is to make probing a more enjoyable experience. If all goes well, abduction will soon be an outpatient procedure requiring minimal to no aftercare. We won't even have to beam subjects up aboard our ships."

Fordt also dismissed radical human rights activists' accusations that liver removal is an invasive and potentially dangerous operation for humans: "What a ridiculous and repulsive idea! The liver is practically a non-functioning organ. Across all known species, we've seen that it is nonessential for life, and its removal does not at all affect an organism's lifespan. A creature requiring a liver for survival? Nonsense; another myth. Such a species would have to be severely underdeveloped, in terms of evolution."

Lead Developer Hennifax has also recently introduced monetary compensation into the research process. "We're thrilled to announce we've received a substantial grant for our research. Thanks to that, all volunteers will be compensated for their participation in our project—with galactic credits, of course. So what are you waiting for? Get out there and sell your body to science!"

Kassie Hsu
Baylor University
4496
Panda Whale
Here are 100 things I'd rather to than study. I know the semester just started, but
Featured