Abortion Rights As Explained By The Trolley Problem
Odyssey

Abortion Rights As Explained By The Trolley Problem

Abortion is one of the most controversial women's issues, and can be brought to light by a famous ethical dilemma 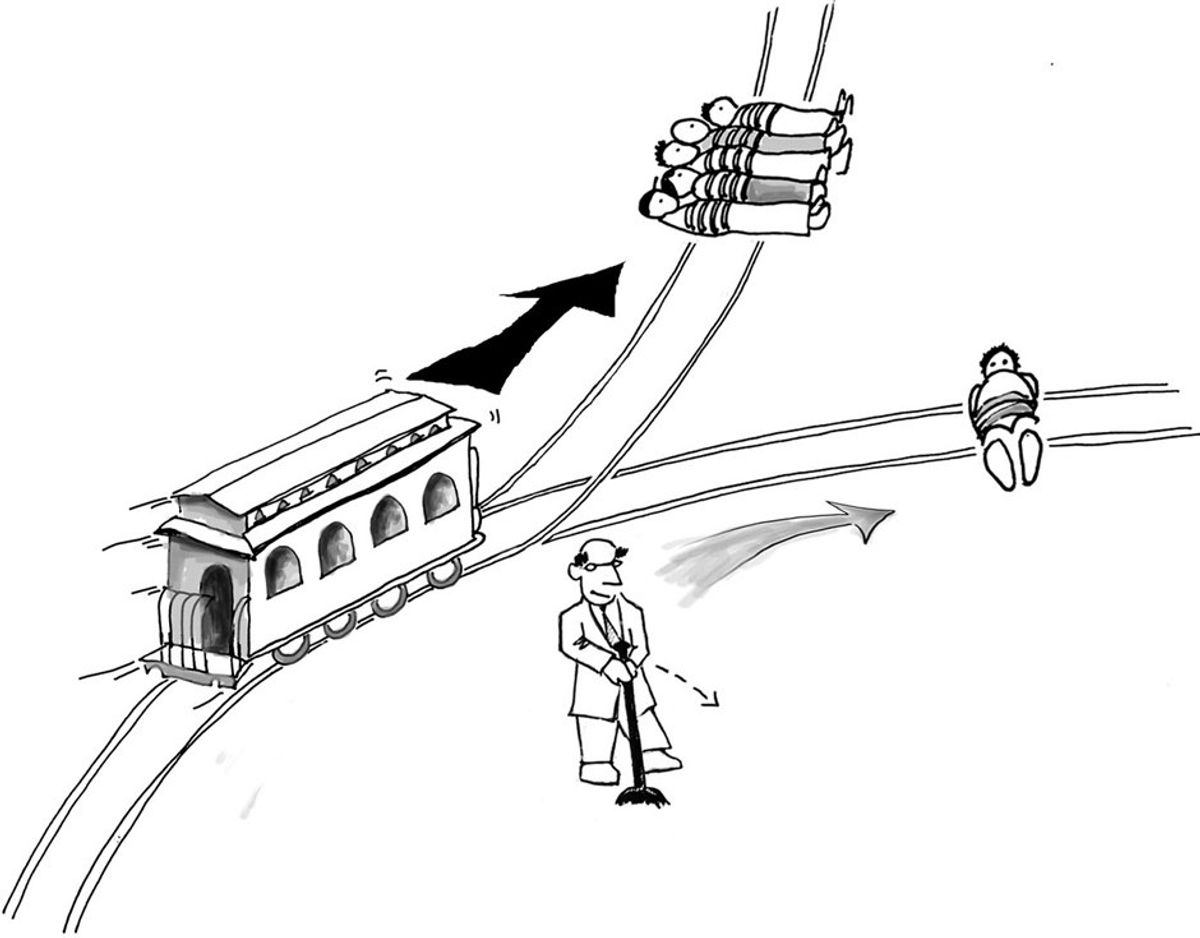 The New York Review of Books

With the recent Women's March on Washington, feminism and women's issues seem to be on everyone's minds. One of the most controversial women's issue is abortion. It seems that everyone I talk to has a different opinion on abortion. Some of my friends believe in a woman’s right to choose, regardless of the situation, while I have also have friends who believe that abortion is on a parallel to murder. I believe they’re both right.

Before you turn away saying, “I can’t believe she would condone murder” or “she’s about to shame women for getting an abortion,” hear me out. By the end of the article, I plan to do neither.

First and foremost, it’s important to accept that laws and morals are not the same. People still kill, steal, and on a smaller level, I’m sure at least one person to read this will have pirated movies or music at least once. Even when something is illegal, people are still going to do it. Additionally, there are things that are legal that most people just don’t do. For example, all Americans are allowed to own guns if they pass an extensive background check and safety test, but only 36% of Americans own a gun or live with someone who does. Similarly, in the state of Vermont, it’s legal to walk around outside naked, but very few people actually do this. Abortion is similar to all of these examples. When it’s illegal, people still do it. When it’s legal, most people won’t. And illegal abortions can be extremely dangerous.

But what about just making abortions more difficult to get? Or maybe only allowing them in cases of rape or incest?

Here’s the thing with being against abortion except in cases of rape or incest: If you believe, as I do, that a fetus is a person, you can’t just suddenly start believing something else when it was conceived between family members or without consent. (Additionally consider that women looking to abort didn’t purposely get pregnant in the first place.) That’s comparable to how people used to deny rights to children born outside wedlock. It wasn’t the child’s fault, and therefore the child doesn’t deserve different treatment than other children. Not to mention, these cases often have to be brought to court, resulting in a dangerous late-term abortion due to prolonged court proceedings.

So it seems that abortion should either be completely legal or completely illegal, which brings us to the trolley problem.

The trolley problem is an ethical dilemma where a hypothetical trolley is speeding down the tracks towards several people tied where the trolley is heading. The only thing to save them is to pull a lever next to you that sends the trolley down a fork to where another person is working on the tracks. So, if you do nothing, several people will die, but if you pull the lever, you’re responsible for the death of the one worker. Being a question of ethics, there is no right answer. However, 86% of people say they would pull the lever, resulting in fewer deaths.

Legalizing abortion rights is a similar issue. If abortion is completely illegal, women who really want an abortion will try to get one regardless, often going to unqualified doctors who make a relatively safe procedure extremely dangerous, often causing the woman’s death along with the fetus’. Meanwhile, legal abortions are performed in hospitals or clinics by licensed doctors using sanitary tools. In this case, the abortion is about as safe as carrying the baby to term without complications, which is unfortunately something many women don’t see as possible for various reasons. For many, it is impossible due to health risks. In other words, whether abortion is legal or illegal, some sort of death will be the result. But when abortion is illegal, there will be more deaths, compared to legalized abortion.

But unlike the trolley problem, many abortions can be prevented. Often when schools aren’t required to teach sex ed, they just skip the subject altogether. Many parents don’t pick up the slack either, leaving kids with skewed ideas on how everything works. Unfortunately, this will not encourage abstinence like many parents hope. Either children will look up the information they need online, or else they will just have sex without knowing about any of the consequences. These are often the women looking for an abortion, whether it’s to keep the secret from their parents, stay in school, or even to not miss work.

So if we want to prevent abortions, banning them isn’t the solution; rather, education is, and should be treated as such.