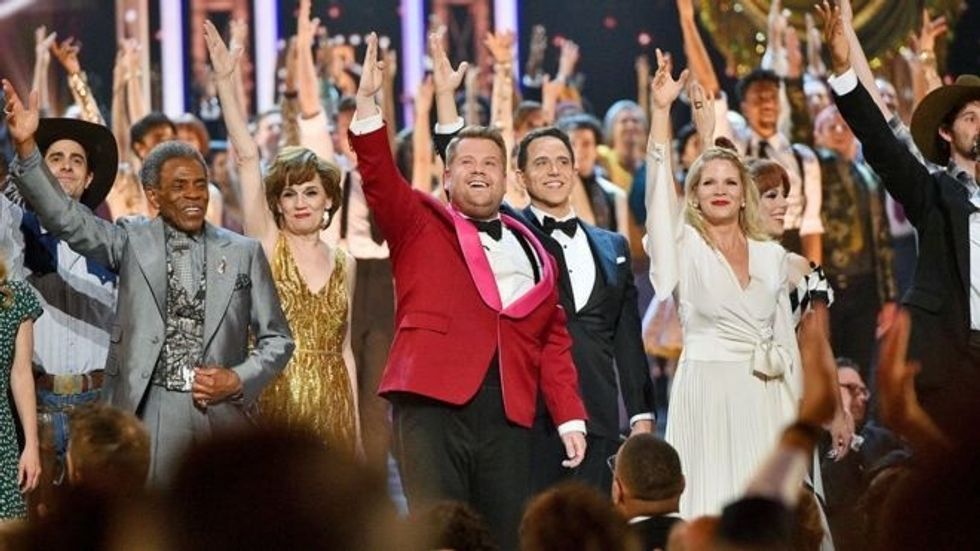 The 2019 Tony Awards were hosted by James Corden and were full of many unforgettable moments. Broadway's biggest night was hosted at Radio City Music Hall in NYC, and it's what I believe to be the most fun of all the award shows.

Live performances, celebrity guest appearances, and a ton of humor went into the show, as always. Actors, directors, writers, and musicians all headed to the big apple to celebrate Broadway. Here are some of the night's best moments that you may have missed.

Corden's second time hosting the Tonys included an opening number almost as thrilling as his 2016 performance. Nothing will beat that one.

But this performance was full of nominated actors and actresses singing about how Broadway is so much better than TV because it's live. They're not wrong there! There is nothing like seeing a show on Broadway. It's truly magical.

Corden pointed out that the majority of the nominees would be losers rather than winners by the end of the night, so he helped them practice their 'losing faces.' Kristen Chenoweth, the company of "Boys in the Band," and Jeff Daniels all hilariously put on their "I didn't win" faces, adding a humorous spin to something that could be pretty sad: losing a Tony.

That's right! The only woman nominated in her category won the Tony Award for Best Direction of a Musical for "Hadestown." In her speech, she says she wishes to see more gender and racial diversity reflected on Broadway. You break that glass ceiling, Rachel!

Stroker became the first performer in a wheelchair to win a Tony for her leading role in "Oklahoma." She dedicated her award to all of the kids watching at home who have a disability and let them know that they are represented in musical theater. Her talent is undeniable and her speech will make you cry. She's incredible!

As always, the performances were some of the best parts of the night. The companies of "The Prom," "Beetlejuice," "Hadestown," "Ain't Too Proud," and more gave us a glimpse of the shows that are dominating Broadway this season. If only I could afford to see them all.

If Corden is hosting, you can always expect a guest appearance by his adorable parents. His dad accepted a phone call and said he was at "some theater thing" and he's "seen better," to which James yelled at him to hang up. It's always such a pleasure to see them on-screen.

James Corden sang a song from the Radio City bathroom revealing how nervous he was about hosting. Last year's hosts, Sarah Bareilles and Josh Groban, appeared from behind the stalls to join in on describing their own insecurities as hosts.

The song they sing is a parody from "Be More Chill" and it is hilariously pleasing. Neil Patrick Harris, everyone's favorite Tonys host, appeared in the bit as well.

The Tonys isn't known to be the most popular of awards shows, so James Corden decided some Broadway stars fighting with each other may raise the ratings. Ben Platt called out Rachel Brosnahan, Andrew Rannells yelled at Darren Criss, and Audra McDonald and Laura Linney were this close to having a girl fight.

Since Broadway is known for being filled with such kind and loving people, it was hilarious to see stars attempt to fight with each other.

For some, this may not have been a surprise, but I had no idea Corbin Bleu was a part of the company of "Kiss Me, Kate!" Their performance of "Too Darn Hot" included a ton of tap dancing from Mr. Bleu himself, taking me back to those "High School Musical" days.

"The Color Purple" alum Cynthia Erivo performed "Can You Feel the Love Tonight" during the "In Memoriam" part of the night, which pays tribute to those we have lost in the theater world this year. Her touching performance will bring tears to your eyes.

The Best Leading Actress in a Musical award went to Stephanie J. Block for her role as Cher in "The Cher Show." Her ability to transform into the legendary singer is incredible, and the Tony is long overdue for this woman.

She passionately speaks to her younger self during her speech, who would be over the moon about her dream finally coming true. My favorite line of hers was directed at her husband, saying, "If you ever leave me, I'm going with you."

12. "Hadestown" was the winner of the night.

Racking up eight Tonys altogether, "Hadestown" came out on top. Their wins included Best Musical, Direction, Featured Actor, Original Score, Sound Design, Lighting Design, Scenic Designs, and Orchestration. Their performance of "Wait For Me" was a standout as well.

I was super impressed by Corden's different outfit changes and felt that they needed some recognition. Props to whoever dressed him.

See you next year, Broadway!