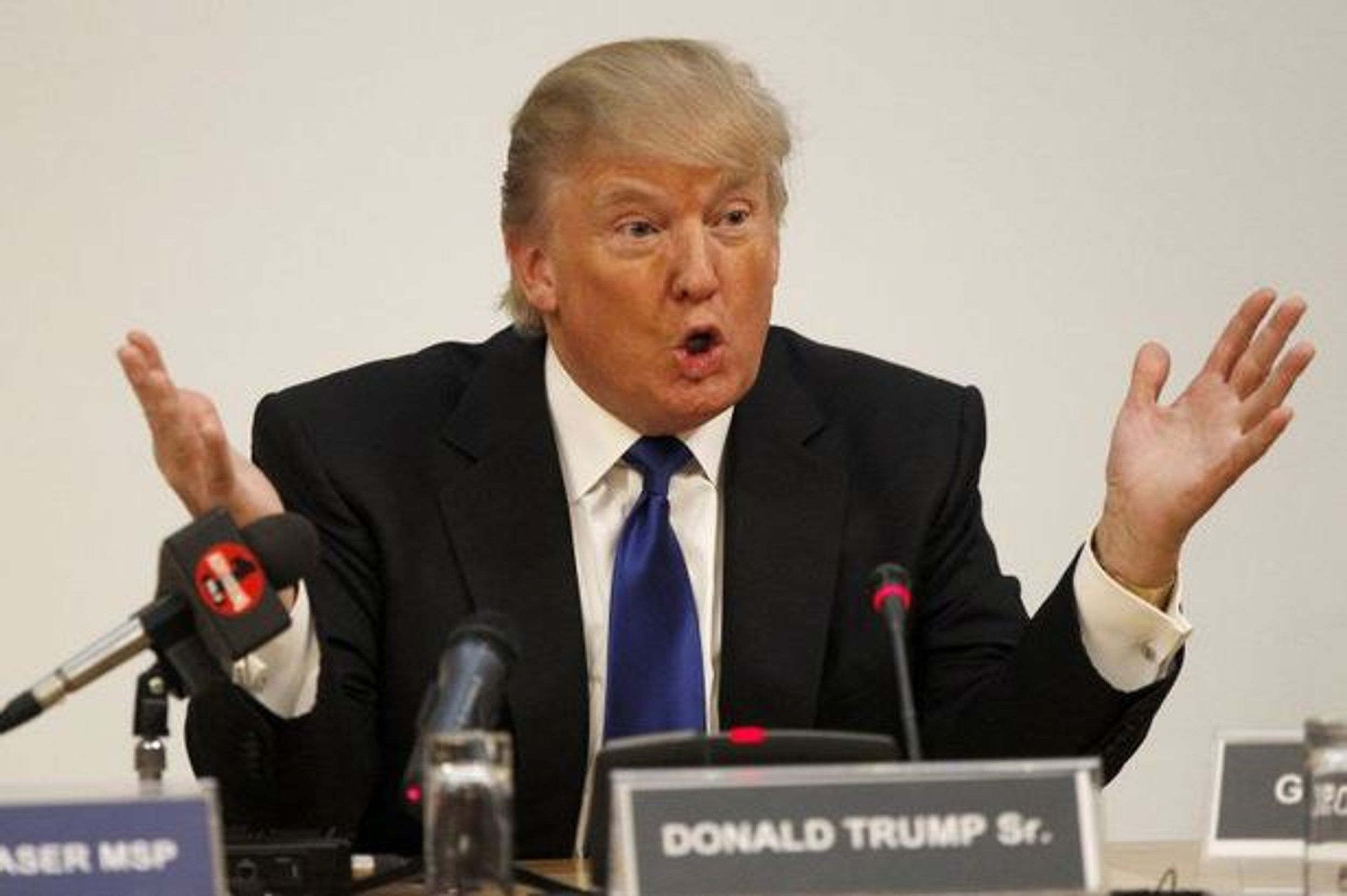 On Tuesday, Donald Trump announced that he will be running for president. Although most people know he's a billionaire businessman, you might not know about some the more ridiculous lawsuits he's filed against various people. Below are the crème de la crème.

1. He sued an airport because planes were flying over his house.

In January, Trump filed a lawsuit against Palm Beach County in Florida, accusing the airport of purposely sending air traffic over his mansion and private club. He is suing both the airport and airport director Bruce Pelly for $100 million, the lawsuit claiming, “Pelly’s efforts in this regard are both deliberate and malicious, and motivated by personal animosity towards Donald Trump.” The lawsuit says that Pelly wants revenge on Trump for stopping his airport expansion plans back in 1995. Suing an airport for flying over his house? The lawsuit is pending.

2. He sued an author for understating his net worth

Donald Trump gets angry whenever someone alleges he's not worth as much as he says he is. New York Times reporter Timothy O’Brien found this out the hard way when Trump sued him for $5 billion. In his book, Trump Nation, O’Brien claimed that the mogul was only worth $150 million to $200 million, instead of the alleged $5 billion to $6 billion Trump claims. Trump said that this understating of his worth hurt his reputation and some business deals, The suit was dismissed.

3. He sued Bill Maher for intimating Trump's father is an orangutan.

Apparently Trump doesn’t like comedy because he sued comedian Bill Maher for offering to donate $5 million to charity if Trump could give proof that his father is not a monkey. Or more accurately, to prove that he is not “the spawn of his mother having sex with an orangutan.” The joke was a spoof of Trump's challenge to President Obama to show his birth certificate. Trump retaliated by sending Maher a copy of his birth certificate and told him to pay up, which Maher did not. The Donald sued him, but eventually dropped it.

4. He threatened to sue a man for campaigning to rid Macy’s of him.

In 2013, Angelo Carusone organized an online boycott to end the partnership between Trump and Macy’s. Trump had signed with the department store to be both a spokesperson for the company, along with selling products in the store. The petition was termed the “Dump Trump” petition and has since received hundreds of thousands of signatures. One of the cease-and-desist letters involved in the lawsuit states that Carusone has used “mob-like bullying and coercion” to protest Trump, instead of simply engaging “in lawful protest.” Since Macy’s still supported Trump throughout this ordeal, I’m not sure why he felt the need to sue someone who wasn’t even going to affect his partnership.

5. He threatened to sue Lawrence O'Donnell for claiming he's not worth as much as Trump claims.

In 2011, MSNBC host Lawrence O’Donnell accused Trump of being worth less than $1 billion. In a tweet, Trump said

“I heard, because his show is unwatchable, that ‪@Lawrence has made many false statements last night about me. Maybe I should sue him?”

O’Donnell responded to the threat by saying that he knew Trump’s big secret: “he can’t afford to sue me.” No lawsuit was filed.

6. He sued a Miss USA contestant for speaking ill of the pageant

In 2012, Trump sued Miss USA contestant Sheena Monnin for $5 million for making controversial comments about the pageant. She told her friends on Facebook that the competition was rigged, alleging that the five finalists were selected prior to the actual pageant. The Miss Universe Organization is the name under which the lawsuit was filed, but Trump owns the company in partnership with NBC Universal. A judge ruled in Trump's favor.

7. He threatened to sue Mac Miller for using Trump’s name

Mac Miller released a song in 2011 titled “Donald Trump” (you can listen to it here). Miller sent Trump a plaque after it became a hit. Trump, however, was not amused, taking to twitter yet again. Trump tweeted to Miller several times, with the ultimate message of wanting money for the song’s success instead of a plaque, and that he was going to teach him “a big boy lesson about lawsuits and finance.” No suit has been filed, and Miller tweeted back saying, “let’s be friends.”