7 Life Lessons I Learned From Being On A Swim Team

Team means family and that is irreplaceable. 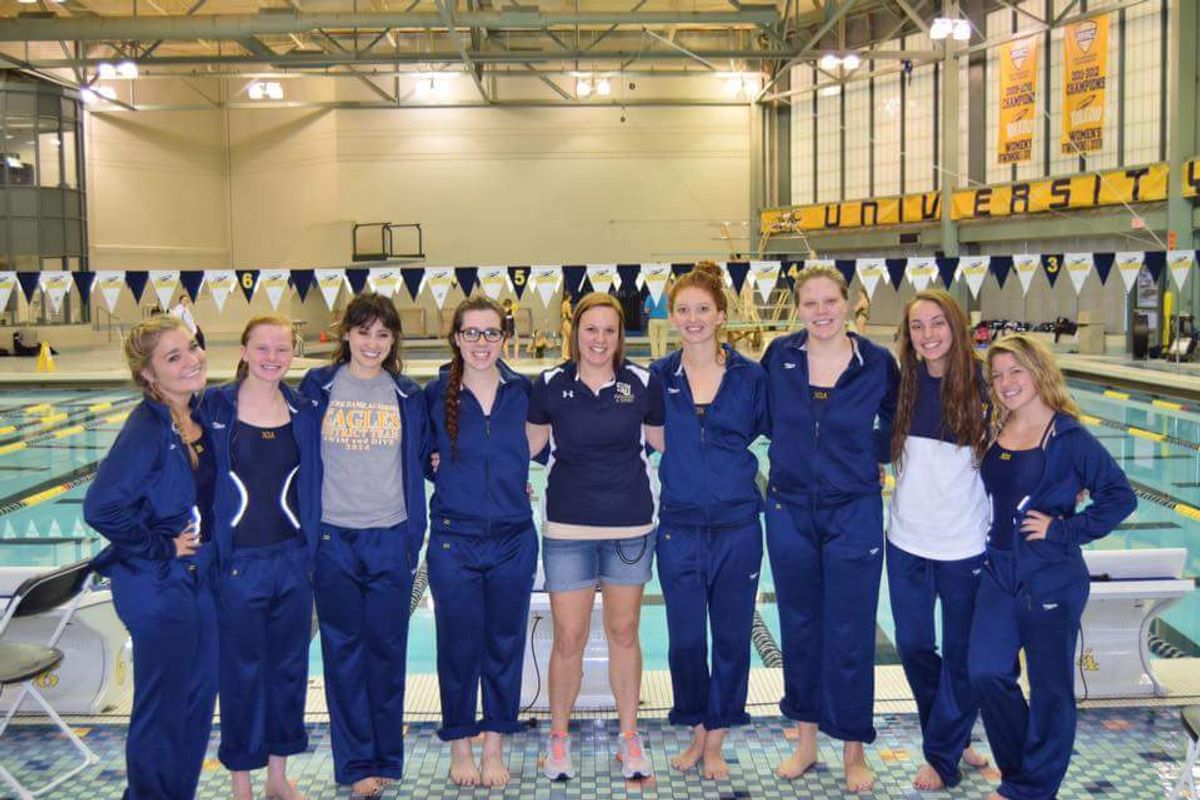 Growing up I have always been a part of a team. I was always doing some sort of team sport whether it be soccer, lacrosse or swimming. I didn't start competitively swimming until my sophomore year of high school, but swimming on the team was the best three seasons of my life. I learned not only a lot about myself but also a lot about what it means to be part of a team and visiting everyone over Thanksgiving break made me miss it even more than I already do.

Regardless on how much you've swam before for a team, the harder you work the more it will pay off and you will get better because of how hard you work. Swimming is a sport that you just have to spend a lot of time doing in order to get better or else you won't see any time dropped. I found that the more I lifted and the more I worked at making send off times, the faster I got and I found myself reaching the goals that I set at the beginning of the season.

2. How to set realistic goals.

One of the things that my coach did that I really appreciated was having us set goals at the beginning of the season. It gave us a visible idea to strive towards as we worked throughout the season. It made me want to work harder to reach those goals so when I did make them, I could see that I achieved something. I may not have hit every goal of mine but they were something to work towards and in the end I did get better, which is all I could have asked for.

3. How to be supportive.

When you're on a swim team, you're trying to swim in individual events to add to a team score. This means there could be five swimmers trying to swim in the same event and you know that only the top four can compete. Swimming the most popular event, the 50 freestyle, meant I was constantly trying to get into the varsity heats but even when I wasn't put in the event, I was constantly cheering on my teammates that did swim it. You want everyone to do well, so you stand at the other end of the wall and cheer them on no matter what the circumstances are.

4. How to take constructive criticism.

There's a lot of moving parts to being successful in swimming. There is always something that can be improved upon even if you are doing it correctly. For me, my flip turns were always what needed to be worked on. Coaches were always telling me to flip faster and push off the wall harder and if I would have let their constant criticism get to me, I wouldn't have gotten better. The more I listened to and learned from my coaches, the better I got.

5. The value of personal success.

There is nothing better than achieving your goals. For me the greatest moment of my three seasons was getting under 30 seconds for my 50 freestyle. It was something I had been working towards, at the time, for almost two full seasons and to see it happen, was so fulfilling. Not only are you excited for yourself, but everyone on the team knows it is something that you had been working towards and they're happy to see you succeed too.

6. Someone will always be there for you.

Obviously high school comes with it's own sets of problems and even being on a team will sometimes give you problems but someone will always be there to listen to you. It doesn't matter what it's about or how dumb you may think the problem is, teams support and lift each other up because they want to see everyone happy. This person may be on the team currently or they may be visiting, but that's the cool thing. Anyone on that team is willing to help and see the current team succeed.

7. What being a team really means.

Team means family and that's the biggest lesson I learned from the Aqua Eagles. After spending countless hours and long swim meets or practices, you become a family and you want everyone around you to do well. No one wants to see you fail and they will do anything to see you succeed. The team will cheer you on in your biggest race and congratulate you when you succeed or lend you a shoulder to cry on when you inevitable miss the wall on your flip turn at sectionals. Either way the team is there for you just like a family and that is irreplaceable.