Pride-filled songs in many genres. 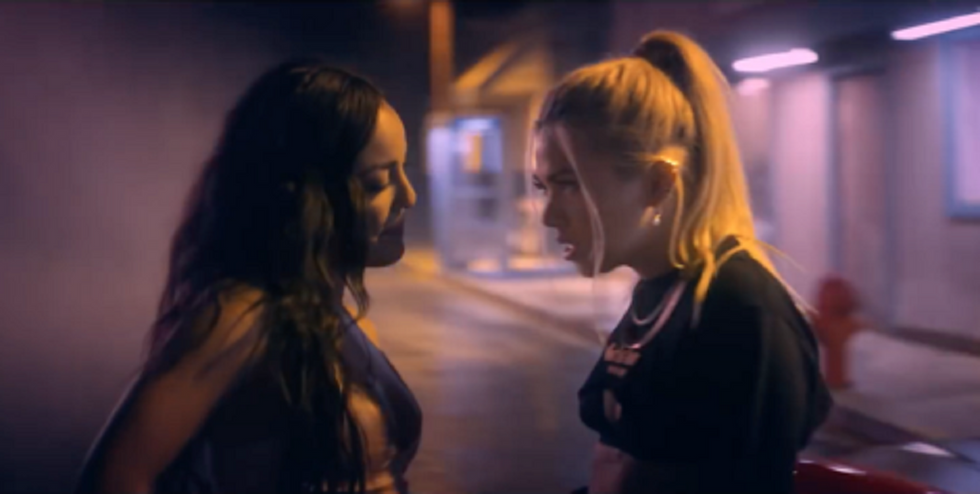 It's June, which means that Pride Month is underway! Though there are tons of LGBTQ-themed songs I could recommend, I'm going to try to keep it to lesser-known / less obvious artists and songs.

Here are seven songs that you should consider adding to your pride month playlists this June.

1. "What About Love?" by Cynthia Erivo and Jennifer Hudson

I told myself that I would avoid Broadway music for this list, but vocal goddesses like Jennifer Hudson and Cynthia Erivo simply cannot be ignored!

This song is from a musical called "The Color Purple," which is definitely an underrated musical. Considering the time period it's set in, it's the last musical you would expect to have a lesbian storyline, but it's done beautifully.

"What About Love?" is a duet between Erivo and Hudson's characters, where they express their love for the first time.

This list would not be complete without the lesbian Jesus herself, Hayley Kiyoko. Though she has a seemingly endless supply of LGBTQ songs, I chose "Feelings" simply because it's incredibly catchy and the music video is really cute.

If you want more lesbian dance-y music, the rest of Hayley Kiyoko's music is the best place to look.

Like Hayley Kiyoko, Superfruit (duo Scott Hoying and Mitch Grassi of Pentatonix fame) have a large supply of gay-themed music in their first album "Future Friends."

This song is hilarious and brings my spirits up whenever I listen to it. The music video makes it even better.

4. "Wherever Is Your Heart" by Brandi Carlile

Brandi Carlile is pretty much the most underrated folk/country artist out there. Though I'm not the hugest fan of the country genre, her music is amazing and touches the soul.

This song's music video is adorable since it includes (and is most likely about) Carlile's wife and daughter. It is well worth a watch.

5. "Sick of Losing Soulmates" by dodie

Dodie has been a big spokesperson about bisexuality on her YouTube channel for years. And though this song was not originally written about gay love, the music video definitely is about that topic.

I like the music video because it goes to show that songs can be applied in different situations all the time. The meaning can change based on the individual person. So though it wasn't written to be an LGBTQ song, the music video has taken that form and lots of people connect to that interpretation.

6. "The Things We Used to Share" by Thomas Sanders

This list needed at least one sad song. Thomas Sanders is one of the most wholesome humans on the planet. His friend Joan wrote this song for him when Thomas went through a bad breakup.

It's a great breakup song and since it uses "you" pronouns, it can apply to anyone. So thought Thomas is singing about an ex-boyfriend, it doesn't have to only apply to the LGBTQ community.

7. "Cool for the Summer" by Demi Lovato

I know I said this was going to be music by somewhat lesser-known people, but this is an exception. This song was massively popular and I used to hear it everywhere, but all the while, I had no idea that it was actually about bisexual experimentation!

It comes off as one of those typical party/sex songs, but when you pay attention to the lyrics, it's actually really gay! That's why the lyric video is included above instead of the music video.

What are your Pride Month song recommendations?

lgbtq
Report this Content
This article has not been reviewed by Odyssey HQ and solely reflects the ideas and opinions of the creator.