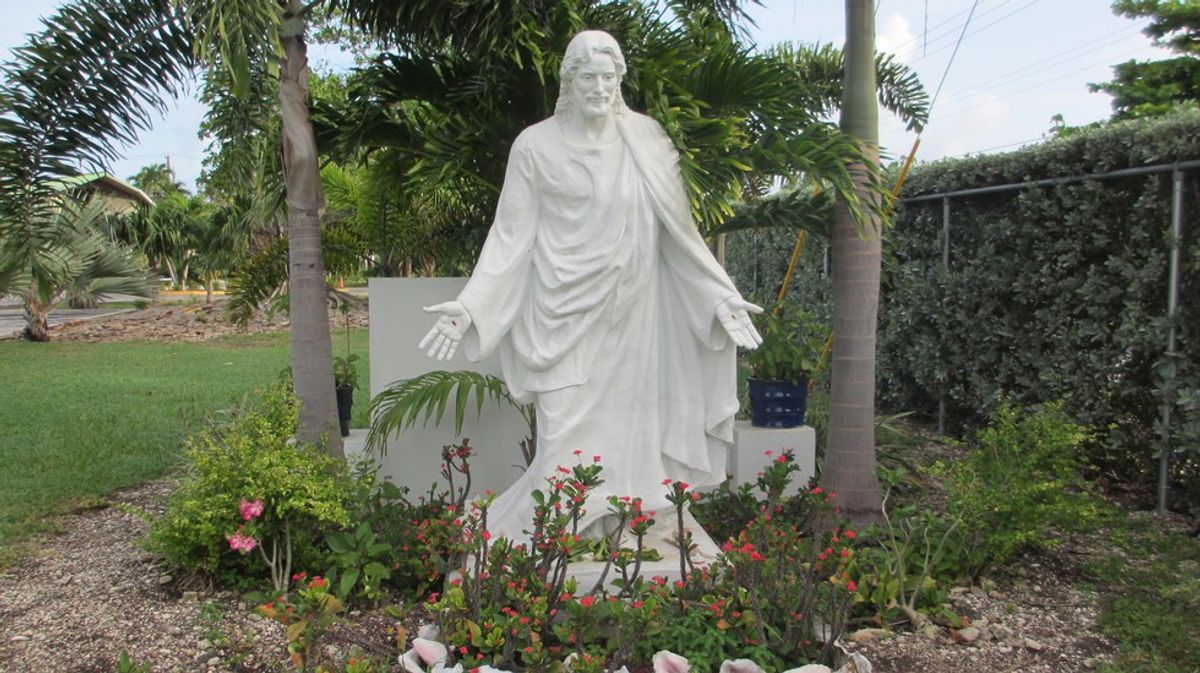 I've been Catholic practically my whole life. I'm proud of my faith, and over the years it has grown to be a very big part of who I am. I'm also proud to be apart of such a long standing religion. Catholicism has been around since Jesus passed on the "keys of the kingdom" to Peter, and because that happened so long ago we have a lot of history and traditions. It can be a lot for even Catholics to keep up with. In fact, I seem to be learning more and more about my faith all the time. There is so much to it, I can't even begin to imagine how confused noncatholics must be. So, today I hope to clear up some of the confusions and misconceptions about the Catholic Church.


Okay, honestly I'm not sure how this speculation came to be. It's to the point that Catholicism is almost always listed as a separate category on applications etc. Don't get me wrong, I'd love for applications to identify that I'm Catholic, but really we should be falling under the Christian category. Catholics, like many other sects of Christianity believe that: Jesus is the son of God, conceived of a virgin (Mary), preformed countless miracles, was sentenced to death, died through crucifixion to save the world from our sins, on the third went back to heaven, ad then came back down to earth (the biggest miracle of them all).According to Webster dictionary a Christian is a person who believes in the teaching of Jesus Christ. I could argue that there is much more to being a Christian, but this definition covers the gist of things.In short, Catholics do in fact believe in Jesus Christ and follow his teachings through the Bible. So, by definition Catholics are indeed Christians.


Almost anytime I tell someone I'm Catholic their immediate response is usually, "Don't you pray to Mary?". By now you would think I'm a pro at explaining this... but I can't say I am, still I'll do my best. As a Christian the common goal is to be Christ like, or as Christ like as possible, yes? This would include trying to act and love in ways that Jesus did. Well, Catholics also try to be like Jesus in honoring and loving who He honored and loved. As far as I'm aware Jesus loved and adored his mother, so in an attempt to be like him we too love and adore her. In fact the Hail Mary prayer we pray are words taken right out of the bible. (Luke 1:43, Luke 1: 41-42a, Luke 1:42b, Luke 1:43, Luke 2:35) We aren't worshiping her we are adoring her and asking her to pray for us. Why shouldn't we honor and commemorate the women who said "yes" to God's will even though it would have been easier to just turn away.

This too is a tricky one to explain, but here I go. In case you didn't know, Catholics have this thing called confession. Essentially we evaluate our lives/decisions and go tell a priests our sins and he gives us a penance (usually some prayers) and absolves us of our sins. Basically, the Priest is interceding for us so we can have forgiveness. Honestly, I would have to write a separate article to explain it all. This tradition started after Jesus' resurrection when he told his disciples, "As the Father has sent me, even so I send you... If you forgive the sins of any, they are forgiven; if you retain the sins of any, they are retained" (John 20:21-23). Here, Jesus is directly giving his disciples permission to forgive the sins of his people, and that has been passes down over the years. If you'd like some more scriptures to support confession: (1 John 1:9, Matt 9:8)


The best way I know how to explain this is to compare it to America. America has the constitution, but it was written so long ago it can be hard to apply it to modern day. So, we have the President to help interpret it for todays world. The Bible was written ages ago and times have obviously changed and so have ways of life. So, Catholics have the Pope to help us interpret it for us. To clear things up, the tradition of the Pope is biblical. Jesus was the head of the church and then he passed on that job to Peter as was the rock that Jesus chose to build his church on (Matthew 16:18-9). (making him the first Pope) and that role continued to be passed down forever.

5. The Eucharist Is Nonessential Or Just Symbolic

Honestly, I love explaining this one because of the biblical parallels between new and old testament to help explain it. First of I'd like to explain that Catholics believe that once Eucharist is consecrated if becomes the body and blood, soul and divinity of Jesus Christ. I know that sounds crazy, but just hear me out. So, if we start in the old testament, during the passover the Israelites had to spread the blood of a lamb on their door frames to protect their first born sons from death. BUT God's instructions to Moses don't end there, He specifically tells him that they have to eat the lamb... YOU HAVE TO EAT THE LAMB (Exodus 12:12). Now, incase you didn't know Jesus is often called "The Lamb of God" he IS the Lamb. And we are told to eat the Lamb. Furthermore, at the Last Supper when Jesus breads the bread and serves the wine he tells them "Take this all of you and eat of it for this is my body which shall be given up for you, do this in memory of me" and then he says "Take this cup and drink of it for this is my blood which shall be shed for you." (Luke 22:19-20). Again, Jesus is telling his followers to eat the Lamb, to in take his body and blood, to save them. Or if you will, "I am the living bread that came down out of heaven; if anyone eats of this bread, he will live forever, and the bread also which I will give for the life of the world is My flesh." (John 6:51). There are many more places in scripture that help promote the eucharist. If you have some doubts (which is normal even Catholics do sometimes) I strongly encourage you to research Eucharistic Miracles, they always blow my mind.

I'm sure that there are many more misconceptions, because Catholicism is a very complex form of Christianity. We do follow a lot of old traditions, but these tradition always come from the Bible. I hope this article helped clear up any confusion about Catholicism, and maybe next time you meet a Catholic you can surprise them with some of this new found knowledge.

Nicole Marie Nigro
Individual Creator
5011
c1.staticflickr.com
Where to start...... Let me start with the cliche that life throws us curveballs and what we do with it is what counts.