5 Better Choices for TIME's "Person of the Year"
Odyssey

5 Better Choices for TIME's "Person of the Year"

So many other people deserve to be recognized for their good in this world, rather than Donald Trump. 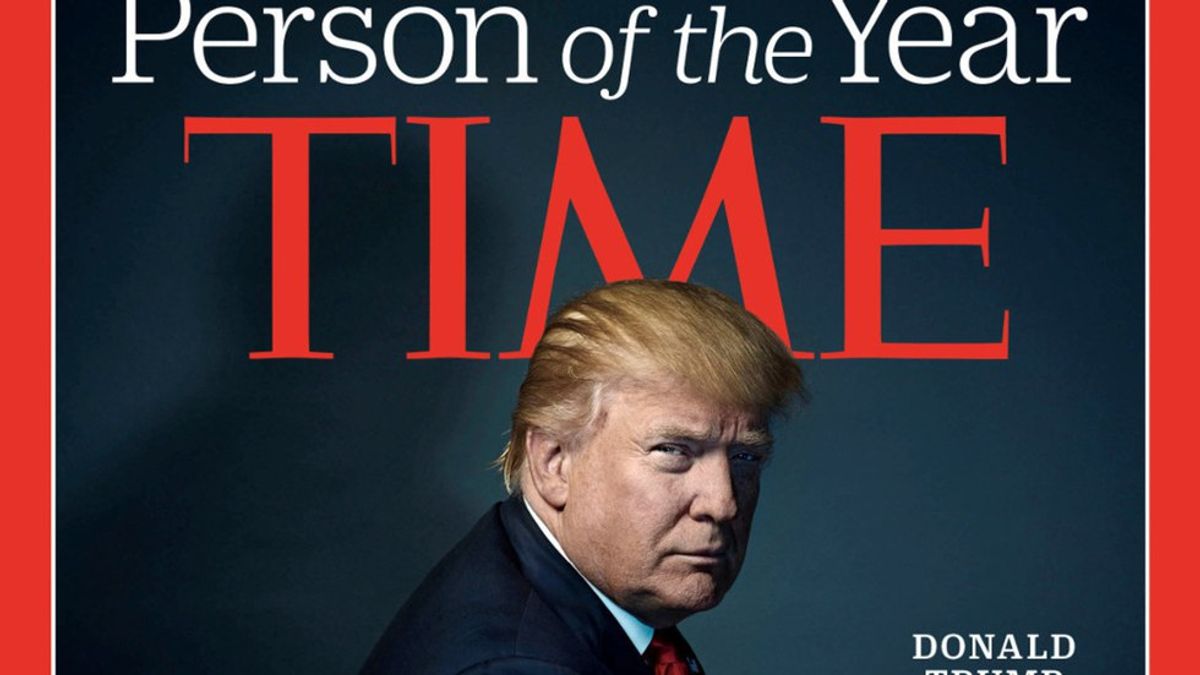 This past week, TIME magazine revealed 2016's "Person of the Year" issue. If you didn't already know, and if you hadn't already guessed it, that person was Donald Trump. Yes, the President-elect of the United States of America. Or as TIME likes to call it "Divided States of America." Which undoubtedly can be seen as a true statement, considering the stir and explosiveness this election has occurred in this country the past year.

To a lot of people, they are probably wondering how in the world could Donald Trump be seen as the "Person of the Year"? The title seems like it comes along with labels such as "influential" "hero/heroine" "a good-doer." But really this award doesn't have much to do with those labels at all. According to former Managing Editor Walter Isaacson, "The title goes to 'the person or persons who most affected the news and our lives, for good or ill, and embodied what was important about the year, for better or for worse.'"

So now you can probably understand why Donald Trump was this year's top pick. It seemed like not a day, minute, or second went by where you didn't hear about Trump. Whether it be from newscasts, newspapers, SNL, Facebook, Twitter, Instagram, Tumblr, MySpace (just kidding, who uses that anymore?), daily conversation, dinner table talk at Thanksgiving that turned into screaming arguments, telephone conversations, text message conversations, middle schoolers passing notes in class saying "vote 4 Trump lol", in public bathrooms where two people in separate stalls are silently thinking to themselves “Is Trump really going to be our next President?” over the sounds of their own streams.

Okay, you get it. Trump was everywhere. No matter where you went, who you were with, there was no escaping him. So of course he was titled “Person of the Year.” Although Mr. Trump was undoubtedly newsworthy this past year, there are numerous people that have gone unrecognized for their duties, bravery, and leadership they have showcased over the past 12 months and beyond. If the “Person of the Year” award were to be given because of these traits, here are five people I would rather be chosen than Donald Trump:

“Lin-Manuel Miranda made Hamilton the most influential Broadway musical in ages and became a hero for his optimistic notion of a rich, diverse America. And he did it by following his gut, his dreams, and his vision—and never forgetting where he came from [Puerto Rico].” Miranda has become an active voice in the Puerto Rican economic crisis, and has been pushing U.S. Congress to pass legislation that would help the territory restructure its $72 billion debt. Miranda is the playwright, composer, and lyricist of his extremely popular Broadway musical Hamilton, which won eleven Tony Awards, and helped him snag the Pulitzer Prize in Drama.

Known for her portrayal of Sophia Burset on the hit show “Orange Is The New Black”, Laverne Cox is an Emmy nominated transgender pioneer. "Before appearing on OINTB, Cox was a star on several reality TV shows including “TRANSform Me” and “I Want to Work For Diddy”, making her the first African-American transgender woman to produce and star in her own TV show." She has been honored with many awards throughout her career and continues to advocate for transgender issues. (PlayBuzz)

We all know Emma Watson as Hermione Granger in the Harry Potter films, but there is so much more to her than her acting abilities. Along with being a Brown University graduate, Watson is the UN Women Goodwill Ambassador which focuses on the empowerment of young women. Watson serves as an advocate for UN Women’s HeForShe campaign in promoting gender equality. “At just 24 years of age, Emma has already been involved in the promotion of girls’ education for several years and previously visited Bangladesh and Zambia as part of her humanitarian efforts.” (UN Women)

If you payed any attention at all to the 2016 Rio Olympics, the name Simone Biles probably rings a bell. She was a member of the U.S. Olympic Women’s Artistic Gymnastics team. Biles is the Olympic individual all-around, vault and floor gold medalist. Every time you watch Biles hit the floor, you couldn’t help but be in absolute amazement. Her strength, motivation, and dedication was apparent whenever she performed. Biles has undoubtedly instilled pride within the American people.

The Standing Rock Sioux Tribe’s protest, along with many other Native Americans, against the Dakota Access pipeline has become a nationwide event. “The pipeline would travel underneath the Missouri River, the primary drinking water source for the Standing Rock Sioux Tribe, a tribe of around 10,000 with a reservation in the central part of North and South Dakota.” The Sioux tribe have been fighting for months to save their sacred land and water supply. Protestors have been met with water cannons, pepper spray, tear gas, and rubber bullets, resulting in dozens of injuries and arrests. Their pride and demand of respect for Native lands is admirable and has brought other Native Americans together to fight for these lands and natural resources that belong to them.

Along with many, many more people in this world who are making a difference every day. People who dedicate their whole lives for good, equality, and human rights. I personally believe this "Person of the Year" title should focus on those who are doing all of these good things. People who are actually trying to make the world a better place, for all.