20 of Coldplay's Best Songs That You Should Be Listening To

20 of Coldplay's Best Songs That You Should Be Listening To

In honor of the band's new documentary, A Head Full of Dreams, here are my 20 favorite Coldplay songs that you should be listening to. I've been lucky enough to see the band live twice and have been following them for years. If you've never really listened to them before, check out this list for 20 great songs to add to your playlist. 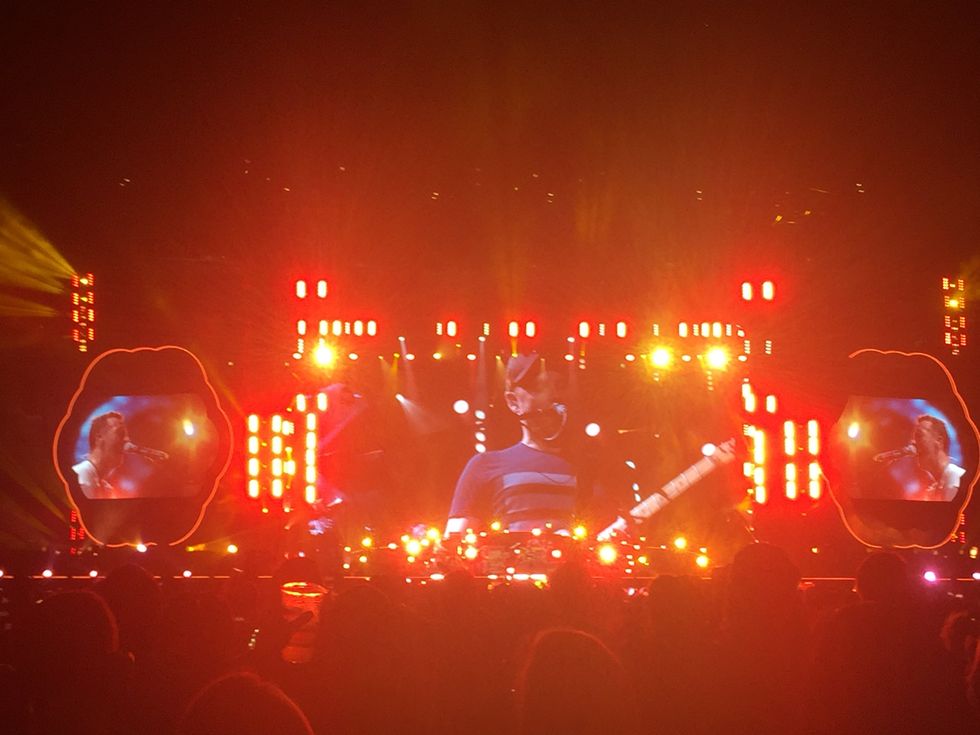 Most memorable line: "We'll run wild, we'll be glowing in the dark."

This song will never get old. When I first listened to it, I probably played it on repeat 3 or 4 times. It's perfect. Putting it as number one might be an unpopular opinion but hearing this song played live lead me to put it as my #1. In concert, Chris Martin asked everyone to put their phones down for this song and just to immerse yourself in it. Because of this, I got to enjoy the song fully and appreciate it for what it is.

Most memorable line: "Tears stream, down your face. When you lose something you cannot replace."

One of my favorite songs ever, Coldplay outdoes themselves with this song. The live version is absolutely incredible and I've been lucky enough to see them perform this song twice. No matter what type of mood that I'm in, this song will make me smile and cry. The lyrics are unbeatable and this song will forever help me get through difficult times.

"Clocks" is probably Coldplay's most easily recognized songs. Even if you don't know the name of it, the piano riff at the beginning is easily identifiable. This song was also another Grammy winner and for good reason.

Most memorable line: "For you, I'd wait, till kingdom come."

LOVE LOVE LOVE this song! Coldplay was originally supposed to record this song with Johnny Cash, but the late country singer passed before the recording. It kind of reminds me of Cash's popular song, "The Ring of Fire" and Coldplay will sometimes perform "Ring of Fire" along with this song. It's super simple and if I ever get married, this song will definitely be a contender for my first dance song.

Most memorable line: "Nobody said it was easy, no one ever said it would be this hard."

Ah, The Scientist. Easily considered by many to be one of Coldplay's best songs. "The Scientist" is complex and raw and I learn something about it everytime I listen to it. The music video is also super sad and this is the perfect song to listen to if you need a good cry.

Most memorable line: "Oh love, don't let me go. Won't you take me where the street lights glow."

Unpopular opinion, but this song is one of Coldplay's best (to me). The chord progression at the beginning is amazing and this song exemplifies Coldplay to me. It may be one of their underappreciated songs, but it definitely deserves to be considered as one of their best.

Most memorable line: "I turn the music up, I got my records on
I shut the world outside until the lights come on."

I almost put this song higher on my listen but I feel like 7 is a fair place for it. This song is uplifting and sing-along worthy.

Most memorable line: "Even if your aims are shadows, still we're never gonna part."

Perfect song for when you're feeling down. Also, a great song to listen to in the car.

Most memorable line: "If you love me, won't you let me know."

Another underappreciated Coldplay song, this is a headbanger. It's great to listen to when you're angry or are looking to rock out to something.

Most memorable line: "For some reason I can't explain, I know St. Peter won't call my name."

Coldplay's Grammy-winning song of the year for 2008 is one of their most popular hits. It's popular for a reason, even though it can tend to be overplayed at times. This song introduced me to Coldplay

Most memorable line: "When she was just a girl, she expected the world."

One of Coldplay's most popular songs, this song is super dreamy and makes you think of a simpler time. Listen to this song when you're stressed out and needing a break.

Most memorable line: "Speaking out from the crests of waves, and you're longing to be saved."

I've tried to find a live version of this song online for years, but I'm convinced that Coldplay has never played this song live before. I listen to this song when I'm feeling confused or frustrated and sometimes it can help my mood feel better.

Most memorable line: "I have no doubt, one day the sun will come out."

Another one of Coldplay's most underrated songs. Definitely check out the live version of this song on YouTube for an even better performance.

Most memorable line: "Get lost, and then get found."

Unrequited love? This song is for you. The chords in this song are excellent as well. This song, off of Coldplay's 2005 X&Y album, is incredibly underrated and a song that you need to add to your Spotify playlist.

Most memorable line: "God give me style and give me grace. God put a smile upon my face."

If you haven't listened to this Coldplay song, you are definitely missing out. If you're a fan of guitar solos, this song has multiple great ones throughout it. It's also perfect if you're looking for guidance.

To find this song, you might have to do some digging. It was considered to be an unreleased track off of their 2014 album but it is still a jam nonetheless. Luckily, you can find the live version on YouTube. This song is perfect for when you are feeling frustrated and lonely.

Most memorable line: "My heart is yours, it's you that I hold on to."

If you're looking for a love song that isn't super gushy, this is the song for you. This is also another great song to add to a rainy day playlist.

Most memorable line: "So you don't know where you're going but you wanna talk."

This song is perfect for when you are feeling frustrated with everyone and just need some alone time. I've also put it on my workout playlist because the guitar solo in this song is excellent.

Most memorable line: "We never change do we? No, no. We never learn do we?"

This song will put you in your feels. It's perfect for a rainy day or when you need some calm and quiet music.

Most memorable line: "Oh I've think I landed in a world I hadn't seen." The title track off of Coldplay's most recent album is a great song to sing in the car. It's upbeat and lively and a great song to listen to when you're looking to jam out.

Madison Franz
The Narrative
1115180
Photo by Brooke Cagle on Unsplash

Madison Franz
The Narrative
653234
Photo by Manny Moreno on Unsplash