From Shakespeare to John Green to everyone in between 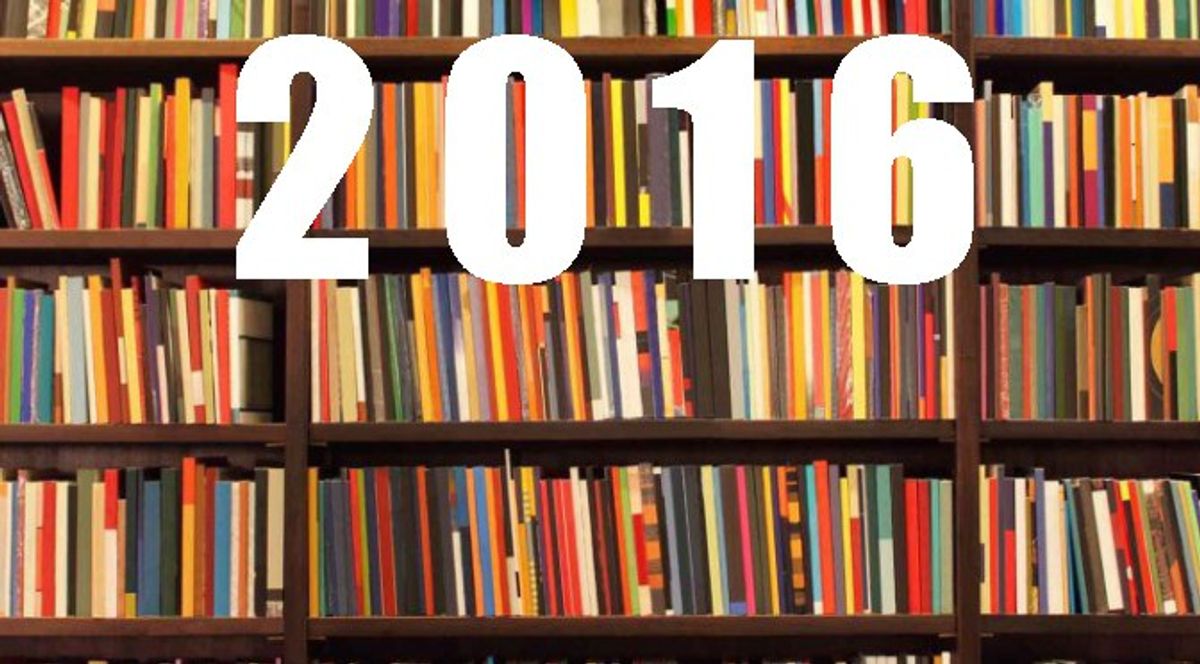 You've been telling yourself for years, "This is the year I'll read all the books on my reading list." Surely that list is at least a hundred books long. Well, here's to even more! These are sixteen books you should absolutely read this year if you haven't read them already. Many of these books have become movies, so that's all the more reason to crack them open. (The list is in no particular order, other than being alphabetical.)

1. The Diary of a Young Girl (Anne Frank)

This one speaks for itself. If you haven't read Anne Frank's diary by now, make 2016 the year you finally do.

Also check out Eleanor and Park by Rowell while you're at it. I had never heard of Rainbow Rowell before coming across Fangirl in my school's library, but I'm glad I know who she is. She's definitely an up-and-comer to keep an eye on. Fangirl follows two twins, Cath and Wren, as they embark on the college journey together and deal with life, love and their dad's loneliness along the way.

Critically acclaimed and highly addictive, Flynn tells the story of Nick and Amy Dunne's fifth wedding anniversary gone awry when Amy goes missing. Is Nick responsible? If you're planning on seeing this movie ever, you should consider reading the book first.

5. How I Became a Famous Novelist (Steve Hely)

This is a super humorous tale about a regular Joe named Peter Tarslaw who writes a novel and becomes famous because of it. It follows his journey of writing the book and how becoming famous changed him. It includes lots of sarcasm and quick wit that keeps you turning the page.

If you're trying to take 2016 seriously, check out this true story of Operation Red Wings and Luttrell's posting in Afghanistan with the Navy SEALs. Even if you don't like nonfiction or war stories, Lone Survivor is a captivating story that's definitely worth reading this year. Then be sure to see the movie.

When you want to sit down and laugh out loud this year, pick up Lowe's enchanting book. In it you can find stories from his personal life that range from camping at Sea World with his son to things they don't teach you in acting class to everything in between. Certainly a book that anyone could enjoy.

Before you go see the movie, read Dashner's first novel in the Maze Runner trilogy. If you want 2016 to bring you adventure and dystopias, look no further than the world of Thomas and the Glade. The maze is always changing and it's the only way out. And once you finish this trilogy, go back and read the two prequels as well.

Before seeing Jon Hamm star as Bernstein in the film adaption, check out Bernstein's written account of his game show that scouted Rinku Singh and Dinesh Patel to the MLB. The book is really fun to read as Bernstein adds a lot of comedy to his travels to India and experiencing a culture wholly different from his in California. Rinku and Dinesh are lovable characters and the best part is you know the whole story is true and all the people are real.

Easily the number one book you should read in 2016. A truly outstanding and heart-wrenching story crafted up by the acclaimed Hannah, this story will have you turning the pages until there are no more pages to turn. Zach and Mia Farraday will capture your hearts the moment you meet them and once you finish reading, your world will never be the same.

This book has been around since 1967 so if you haven't read it by 2016, you definitely need to get on it. Ponyboy Curtis and Johnny Cade get themselves into a whole bout of trouble and the lessons learned from their story are ones that will remain with you forever. And may you always stay gold.

This one just became a movie so is definitely worth reading. Q is a fun-to-read main character and his adventures throughout Florida and New York are just as fun as he is. Any John Green book is acceptable for your 2016 reading list, so long as at least one makes it on there. Not an author to overlook by any means.

Because it's pretty much a rite of passage at this point in time. Recommendations include "Hamlet", "Othello" or "Twelfth Night" but any play will suffice. Just get your 'Speare on in 2016.

Another one of those "rite of passage" books, perhaps, but still worth considering. It won't be as gripping as other books on this list, by Vonnegut makes some good social commentary points throughout Slaughterhouse-Five that will keep you interested as you become unstuck in time with Billy Pilgrim.

15. To Kill a Mockingbird (Harper Lee)

And while you're at it, check out her new novel Go Set a Watchman as well. TKAM is such a classic that at this point in time I don't think there's anyone left who hasn't read it. But if you're that person, then read it in 2016 for sure. Scout Finch's tale of racial injustice has been taught in so many schools for so many years that I'd be surprised to meet a college student today who didn't read it at some point in their high school careers.

The book's narrator Cullen Witter is so relateable that reading the story is as easy as counting to three. His side comments about everything keeps the book entertaining. There is a second plot unfolding at the same time (the book switches back and forth each chapter) that seems to have no relevance to Cullen at all, but in the end everything winds up coming together. Another top pick for 2016.

So as the year comes to a close, friends, get excited for an upcoming year of literature, laughs and total entertainment. 2016 won't have a dull moment in it because you'll spend so much of it reading all these hilarious, interesting, inspirational, heartbreaking and overall outstanding tales told by extraordinary writers. Happy reading!

Emmaline B
The Narrative
20504
https://unsplash.com/photos/O0T1SIgHAfM