15 Of The Greatest Words

15 Of The Greatest Words

Incorporate these into your vocabulary today! 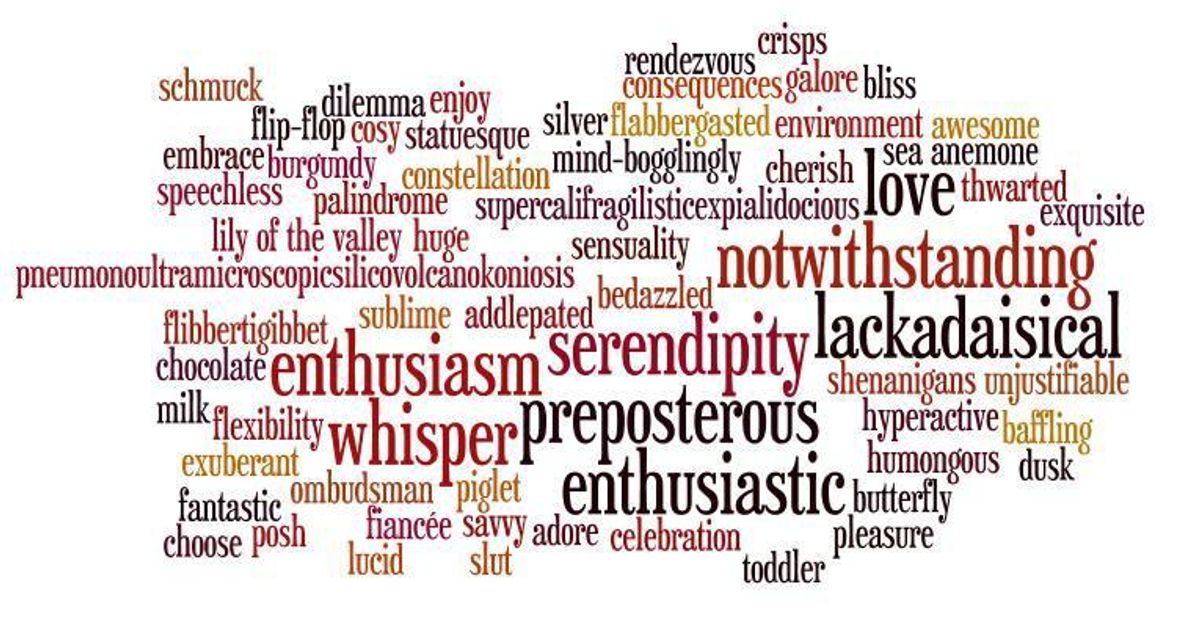 English originates from after the Norman Conquest of 1066 and is one of the newer languages worldwide. Beginning with the Anglo-Saxons in England in the sixth century and lasting through multiple waves of evolution to become what we speak today, English is considered a West Germanic language, composed of other older languages like French, Arabic and German. If you wanted to read a more in-depth history, check out this neat website.

Beowulf, written by an anonymous poet (see Seamus Heaney's fantastic translation here) and possibly dating between eighth and 11th century England, is considered the first work of literature written in the English language. Technically, it is written in Old English.

Through the years, great words have gone in and out of use, resulting in a sort of rediscovery of fantastic words. Here is a list of words (with their meanings, taken from the Merriam-Webster dictionary) that fit this description:

Gruntled, gruntling; transitive verb. Meaning "to put in a good humor" [were gruntled with a good meal and good conversation - W. P. Webb]

The verb "disgruntle" has been around since 1682 and means "to make ill-humored or discontented." In the 1920s, a writer used "gruntle" in a humorous way to mean "to make happy," and it caught on.

Fun fact: the Merriam-Webster dictionary considers its popularity in the bottom 40 percent of words.

Means "the quality or state of being incandescent; especially: emission by a hot body of radiation that makes it visible."

(For the record, "incandescent" means "to produce white light when heated, the state of being white or glowing due to great heat, or very impressive/successful/intelligent")

"A plant like grass that grows in wet ground or near water."

Full definition: "any of a family (Cyperaceae, the sedge family) of usually tufted monocotyledonous marsh plants differing from the related grasses in having achenes and solid stems; especially: any of a cosmopolitan genus (Carex)

Sedge dates back to the Old English word secg.

Means "the quality of being open, sincere, or honest."

"Candor" comes from the Latin verb candēre ("to shine or glow"), which in turn derives from the same ancient root that gave the Welsh language can, meaning "white," and the Sanskrit language "candati," which translates to "it shines." There is even "excandescence," an uncommon word that refers to a feverish condition brought on by anger or passion.

Fun fact: In the popular YA dystopian series "Divergent," written by Veronica Roth, there is a faction called "Candor," their symbol being an unbalanced scale.

A quality of being disloyal, unfaithful, or an act of disloyalty.

Etymology: "Latin perfidia, from perfidus faithless, from per- detrimental to + fides faith"

A pleasing or sweet sound: especially "the acoustic effect produced by words so formed or combined as to please the ear."

According to Merriam-Webster, "In addition to its more commonly recognized senses, "euphony" also has a more specific meaning in the field of linguistics, where it can refer to the preference for words that are easy to pronounce; this preference may be the cause of an observed trend of people altering the pronunciation of certain words apparently in favor of sound combinations that are simpler and faster to say out loud."

A madrigal can be either "a medieval short lyrical poem in a strict poetic form" or "a complex polyphonic unaccompanied vocal piece on a secular text developed especially in the 16th and 17th centuries."

First known use in 1588. Listen to an Italian madrigal here.

To be described as "swarthy" means you have dark skin.

Funnily enough, Bob Belcher from FOX's animated series "Bob's Burgers" was described by Mr. Fishoeder in Season 1, Ep. 13 ("Torpedo") as "swarthy" after asking if he was an immigrant.

British slang for "prison," first used about circa 1700. It seems to originate in a lot of Latin phrases.

Meaning "of or relating to the earliest ages (as of the world or human history)," often relating to very old forests or land.

Literally means "to be shaped like a lance or spear; tapering to a point." Often used to describe leaves!

According to Wiktionary, due to its slang origins, "moochin" comes from the Welsh word "mochyn," meaning "pig, greedy, or immoral person."

The word "moochin" specifically means a difficult or disagreeable person, especially a child.

In Welsh, it is also spelled "mwchin."

Meaning to be "characterized by a rhythmical swing or cadence."

Relating to swamps and bogs, "fenny" is to have characteristics of a fen, or in/around one.

The word is most famously used in William Shakespeare's "Macbeth," during the witches' chant (Act 4, scene 1), needing a fenny snake for their potion.

First used before the 12th century.

Thought it's visually appealing, the word "valise" just refers to "a small suitcase."

It is French, though originally coming from the Italian valigia, first used around 1615.