14 Things I Love Most About KPOP (So Far)
Odyssey

14 Things I Love Most About KPOP (So Far)

Follow me into my journey of the things I love about KPOP. 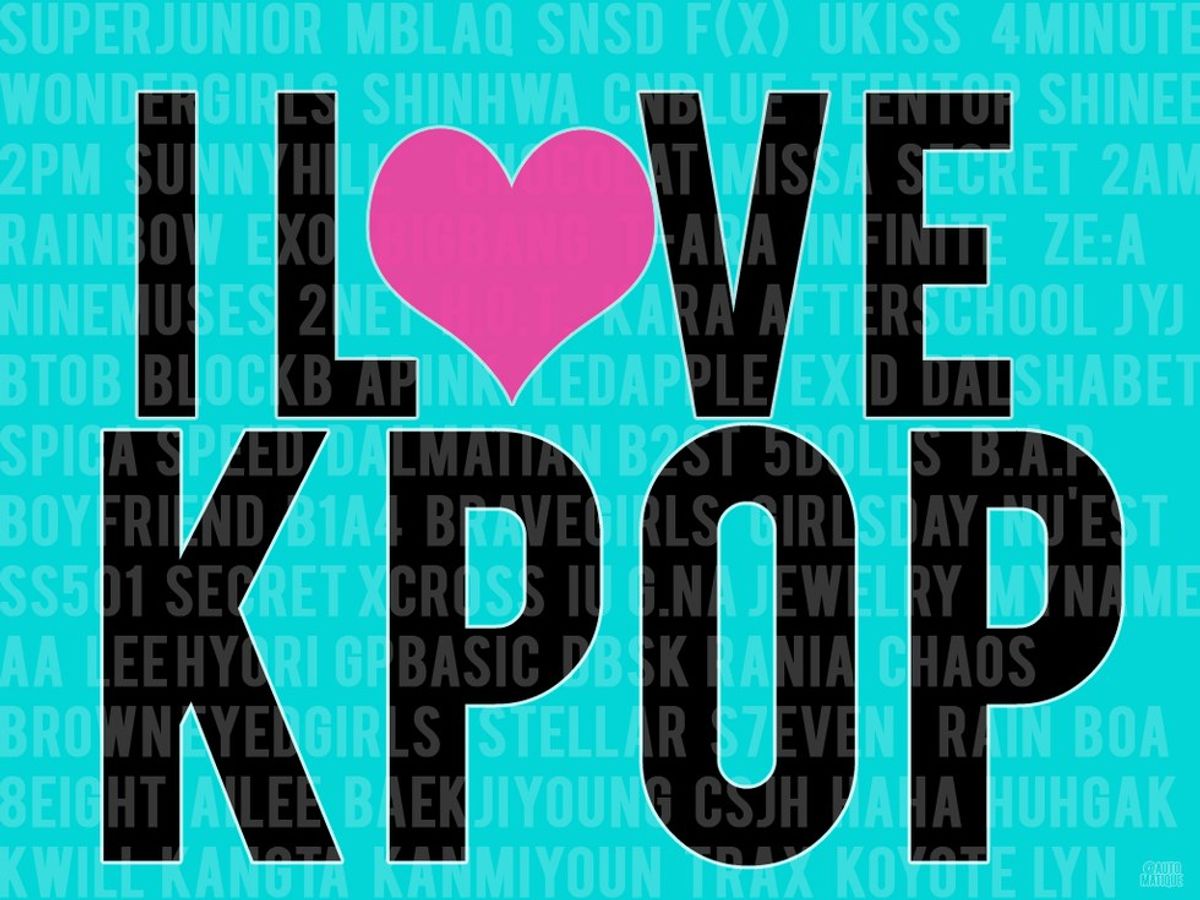 KPOP. Korean Pop music. Also known as pop music originating in South Korea. So what in the world is a 20-year-old Long Island girl obsessed with mainstream music doing spending her free time watching and listening to KPOP? Well, the answer is super duper simple. I'm enjoying myself. Duh. If I wasn't enjoying myself why would I be doing it? While I haven't ventured too far into the world of KPOP, I have ventured far enough to find two amazing groups I really like, thanks to a friend I happen to really like. Let's put on our water shoes and dive right into finding out why KPOP is "Just Right."

Sam? Who is Sam? Sam is my friend who got me into KPOP. The first step to liking KPOP is to find a friend that also happens to like KPOP. Finding a friend that likes KPOP is a huge deal because when you have friends, their music tastes tend to rub off on you. Sam did it to me, and we both did it to our friend Kayla.

When you listen to good music, you're automatically going to have good vibes and then you'll have good times. Good music means good times which means good vibes. There are tons of KPOP groups for you to pick from. Take your pick and enjoy!

The music itself is so catchy. Music is music no matter what language it's in. I can't promise you'll understand all of the lyrics, but I can promise that the beats will get stuck in your head. Kind of like the intro to Big Bang's "Bang Bang Bang."

4. The lyrics will get stuck in your head.

Whether the lyrics are in Korean or in English, they will get stuck in your head. You may not know what you're singing, but you will be singing lyrics from the songs for days on end. And then there is me who is singing "Girls girls girls, they love me" for hours at a time thanks to Got7's song "Girls Girls Girls."

5. The videos are awesome.

So you've decided to become a KPOP fan. The music videos or MV for short, are an awesome way for you to get used to the music, learn some of the lyrics and recognize faces. It can also help you pick your favorite member, also known as a bias! I already linked my favorite KPOP video ("Just Right" by Got7) in the beginning, so I asked Sam her favorite video. She recommends "Fire" by BTS.

Dance practices are just what they sound like. They're videos that the groups record, practicing their dances. There are usually two versions. A serious one and a less serious one where you can totally tell they're kind of goofing off. They're a good way to watch the choreography without everything happening in the background. My favorite is the dance practice for "Baepsae" by BTS.

Stage presence is huge. Some groups give off a fluffy, cute, young stage presence. Others give off a mature and adult one. And then there is Big Bang. The group that's been a group for 10 years now. Their stage presence is the definition of insanity. They're so good and they know how to work the crowd. No matter how big a stage is, Big Bang makes it look tiny.

8. Different concepts in each video.

Each group has different concepts with each video they release. It can vary from group to group which I tend to like the best. Each concept has the members of whichever group singing a little different, dancing a little different and certainly dressing different. My most favorite concept as the cute, boyfriend-esc era of Got7's "Just Right." A close second is the "Stop Stop It" phase, also by Got7.

9. The members are hilarious.

When group members are not rehearsing or performing they're probably being funny. Different groups have different behind the scenes videos. Got7 has "Got7-ing" and BTS has their "Bangtan Bombs." A super hilarious Bangtan Bomb is "Show me your BBA SAE!"

Throughout this list I've mentioned "Got7" a bunch of times. Who are Got7? Got7 are the first KPOP group I ever fell in love with. When Sam texted me the link to the video for "Just Right" I knew I was hooked. The group is composed of 7 members. Jackson, Mark, BamBam, Jr., Youngjae, Yugyeom and their leader, JB. The group is the first group I ever watched, and hold a place near and dear to my heart.

When you find your favorite member of a group, they become your bias. Jackson Wang from Got7 is my favorite. He's my Got7 bias, and has slowly become one of my favorite people. Jackson is so funny and sweet. Although, he can be a little... extra. He's got a wild and crazy personality and doesn't exactly know how to use his inside voice. But without fail, Jackson is always able to put a smile on my face.

BTS is the second KPOP group I became a fan of. The group also consists of seven members. Jin, J-Hope, Suga, Jimin, V, Jungkook and their leader, Rap Monster. After watching their music video for their song "Dope" I was hooked. They soon became the second group I followed.

BTS's Jimin is my most favorite member of BTS. He's cute, cool, funny, an amazing dancer and extremely into his dancing and himself, but in a really good way! A quote that perfectly describes Jimin is "When is Jimin not feelin' himself?" According to Samantha he is a "squish that can go from cute to sexy AF in two seconds." He's best friend's with Sam's bias, Taehyung also known as V. So it's okay. (95 Line represent!)

Music is music. Simple as that. Music makes you feel good. What language it's made in or who makes it or how it's performed shouldn't hold you back. I love KPOP. I love music. I love KPOP because it is music.