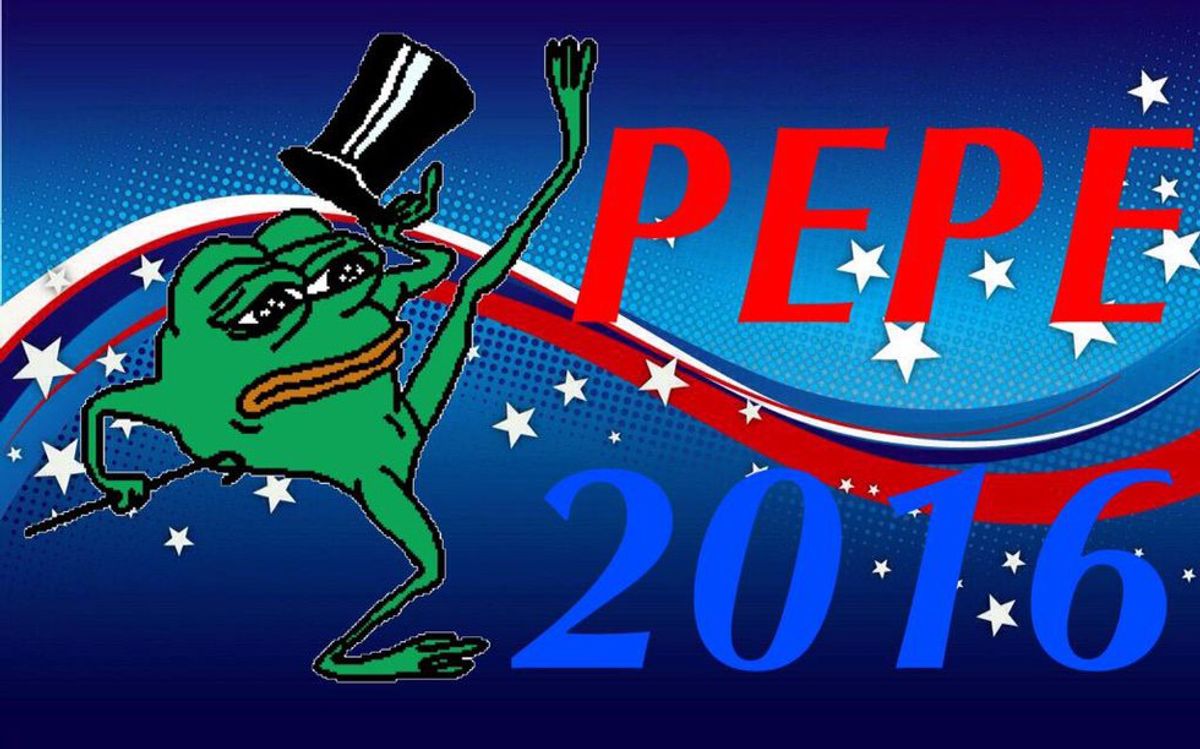 While 2016 may not have been the best year for politics or survival of pop icons, it was a great year for memes. From the death of a gorilla to the dab (which should be beyond dead by now), we were filled with image macros and two frame comics. 4Chan, iFunny, Reddit, and more have been inundated with thousands upon thousands of our best and dankest memes. With so many, it would seem a new one popped up every day. However, there seemed to be one meme each month that would stand out among the rest. It was a tough choice for many memes, but ere are the best memes of each month of 2016.

1. January: How Should a Dog Wear Pants?

This was first posted in late December of 2015, but it dominated social media for most of the beginning of the year. Several variants would later show up, one such asking where a giraffe would wear a tie.

A screenshot from the 2000 movie, "The Emperor's New Groove," of Pacha explaining how the sunset hits the ridge just right was uploaded right at the end of January. It took immediately and became The Emperor's New Meme.

This meme saw a resurgence as the last months of the 2016 presidential election began to wind down. Comparisons between police sketches and Cruz were tweeted and retweeted by millions as well as anything that could be construed as Cruz being related to the Zodiac Killer were shared.

4. April: Confused Mr. Krabs/ When You Wake Up From a Nap

Spongebob Squarepants has been a treasure trove of memes. Whether it be Squidward dabbing or Patrick taking something and putting it somewhere else, the show never fails to provide the materials for dank memes. Here, it is referenced that Mr. Krabs is either just waking up from a nap, or that he is severely intoxicated.

While the phrase, "Dat Boi," is nothing new to the internet, the 3D model of a green frog riding a unicycle was, and the internet had a field day with posting it everywhere.

Once again making the list, this time Spongebob appears suddenly caught off guard, place in an awkward situation, or confused by something simple. This meme appeared on every social platform, much to everyone's annoyance.

Harambe was shot and killed in May in order to protect a young boy who had fallen into the gorilla's enclosure at the Cincinnati Zoo. After many people posted sincere tributes on Facebook and Twitter, jokes and memes surrounding Harambe and his death soon followed. Several animal rights groups took issue with the "trivialization" of the gorilla's death and other groups dared to call the memes racist, only egging the internet to post more of the memes.

Pawn Stars has many in-jokes and catchphrases familiar to its fans, but this is one that went mainstream. Often given low estimates or minimal effort towards something that is worth a great deal more is the most common use for this meme. In a similar vein, a copypasta of Harrison's intro to Pawn Stars entered into the internet vernacular.

This is often used to describe situations that are extremely favorable and cause an immediate positive reaction, often suddenly in nature. Slam it like you are answering a question on Jeopardy!

The 2016 Presidential Election became even more heated when supporters of Donald Trump and Hillary Clinton waged cyber warfare and the Meme Wars were revived. Every meme was up for grabs and no social media site was safe. Pepe the Frog took the biggest hit as during the wars, he was officially labeled as a hate symbol.

With the Obama Administration's time in the White House ending, denizens of the net took it upon themselves to poke fun at the bromance between Biden and Obama, the former of the two often acting childish or lovestruck. That or him planning pranks for President Trump to find in the White House.

Who knew an evil Kermit would be the voice inside all of us, our Id, telling us what we want to hear, instead of what we need to hear. Oh and there is an evil Miss Piggy too for all of those relationship problems.

Emma Hyatt
2003
The Truth About My Parents' Divorce