10 Things I Love About Indianapolis

Welcome to the crossroads of America. 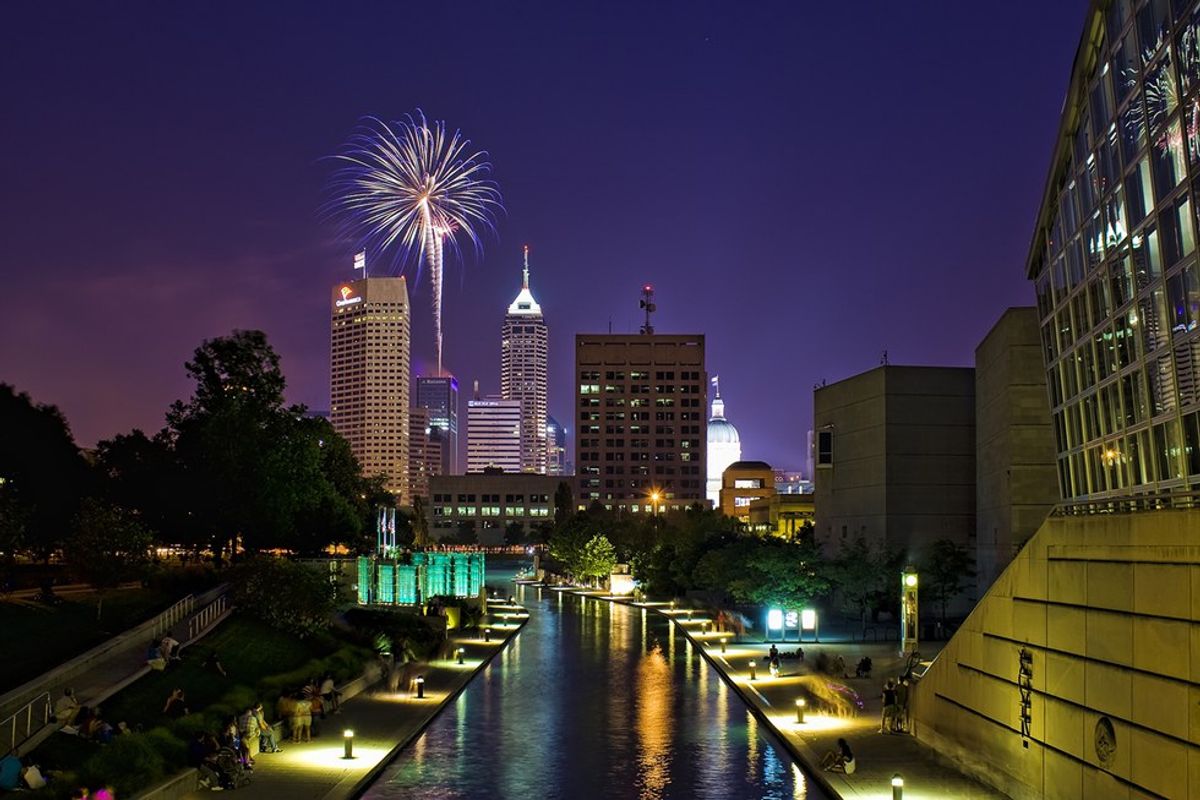 I am an Indianapolis native, born and raised there my entire life. College is the first time I lived in a different city for an extended period of time. Even though I'm not the type of person to get homesick, I’m thankful that Grace is only about 2 hours from home, because I absolutely love my city. Indianapolis, though it might not be perfect, is home to me and I absolutely love it with my entire heart. Here are my top ten favorite things about Indianapolis.

Indianapolis is a city full of heritage and history, and that is evidenced by its monuments. Indianapolis has the second-largest collection of monuments and memorials in any city in the U.S., only surpassed by Washington, D.C. The most iconic memorial is the State Soldier’s and Sailors Monument, located on the circle in the center of downtown Indy. Each November, this monument to Indiana’s fallen Civil War soldiers is lit up as a giant Christmas tree in a fantastic presentation by Indianapolis Power and Lighting. However, Indianapolis has many more memorials, Including the World War I Memorial (my personal favorite), the USS Indianapolis Memorial, a tribute to those lost in 9/11, and memorials for the veterans of the Korean and Vietnam Wars.

Indianapolis takes the fine arts seriously, and there are no shortage of places to sample the various arts that Indy has to offer. There are multiple performance venues all around town that allow artists and touring performances to stop in Indy, including Klipsch Music Center, a large outdoor concert venue; and the Old National Centre, a building downtown with multiple rooms to host various concerts, theatre performances, and other acts. Theatre is also prevalent around Indianapolis, with the Indiana Repertory Theatre offering various genres of performances year-round. Additionally, you grab grab dinner and a show with the high-quality performances at Beef and Boards Dinner Theatre. As for the visual arts, Indianapolis has several art museums, including the Indianapolis Museum of Art, which displays art from periods throughout history in multiple mediums and styles. The Carmel Arts District and the Canal Walk also provide various art pieces in differing mediums and styles on a walking tour through different historical districts.

Downtown Indianapolis has six distinct cultural districts, all offering a unique set of shops, dining options, performances, and seasonal activities. The Canal and White River State Park offer a walk through downtown along the river, passing by some of the city’s most inspiring attractions, intriguing museums, and cultural celebrations. Fountain Square is a vibrant neighborhood that is home to great food, uncommon shops, noteworthy architecture, and distinctive entertainment. Indiana Avenue stretches between the Central Canal and the White River and showcases Indianapolis’s rich African-American culture, a combination of history, music, and spirituality. Mass Ave is the heart of the Arts and Theatre District, and is peppered with independently-owned restaurants, locally-owned niche stores, numerous art galleries, and several performance arts theatres. Filled with rich architecture and outdoor art, Mass Ave offers a memorable experience every time you visit. Market East is an upcoming cultural district on the east side of downtown, and is filled with outdoor spaces and green activities and is anchored by the historic Indianapolis City Market. The Wholesale District is in the center of town, filled with bright lights of the marquees at the Indianapolis Repertory Theatre and the sophisticated doormen ready to greet you at the Conrad. Circle Centre Mall has something for everyone, and Monument Circle stands front and center. The Indianapolis Cultural Trail is a bike and footpath that connects all six districts, passing by some of Indy’s greatest amenities and unique cultural art.

Indianapolis is home to many museums that cater to a wide variety of interests. The Children’s Museum is an award-winning museum in Downtown Indianapolis that has many permanent and rotating exhibits on history, science, and other areas, providing a fun and educational environment for children of all ages. The Indianapolis Motor Speedway Museum focuses of “The Greatest Spectacle in Racing” and the Eiteljorg Museum showcases Native American Art. The Indianapolis Museum of Art features pieces from many times, in many mediums, and in many styles, and the Indiana State Museum showcases Indiana history.

Indianapolis is a city with an incredibly diverse population, and the city reflects that. During the summer months, Indianapolis is riddled with festivals, including festivals to celebrate Italian, Greek, American, Chinese, Latino, German, and Irish backgrounds. Indianapolis hosts multiple conferences including GenCon, a video game convention, and Indy Black Expo, a celebration of the African-American culture and history in Indianapolis. Art and music festivals like Penrod and IndyFringe also draw large crowds, and Indy Pride is a huge event each year to celebrate the LGBT community in Indianapolis.

While sports may not be my personal favorite choice for a free-time activity, I love the activity and energy that events bring to the city. As the sports capital of the world, Indy has no shortage of sporting events and history to add to it’s rich culture. As the home of basketball, Indianapolis has a NBA and a WNBA team along with the NCAA Hall of Champions and regularly hosts the NCAA Final Four. Indianapolis also hosts the Indy 500 and the Brickyard 400 at the Indianapolis Motor Speedway, and has a minor league baseball team, the Indians, that play at Victory Field. Lucas Oil Stadium hosts the home games for the Indianapolis Colts. Indianapolis also has hockey and soccer teams, and hosts other sporting competitions throughout the year, including areas of swimming and tennis.

Indianapolis is a city full of history and historical figures, both on national and local levels, The city is spotted with monuments and memorials along with other historic sites, like the Benjamin Harrison Home, the estate of the twenty-third President of the United States, and the James Whitcomb Riley Home, the birthplace of local and nationally acclaimed poet James Whitcomb Riley. More local history abounds in locations like the Hanna House and Crown Hill Cemetery, which is the final resting place for Benjamin Harrison, John Dillinger, and Colonel Eli Lilly.

A final part of Indianapolis that I love is the many parks we have around the city. Indianapolis is home to Fort Harrison State Park, which was an active military base from 1906 to 1996 and even housed German prisoners-of-war during WWII. Garfield Park on the south side of town features an impressive Botanical Conservatory and sprawling European-style Sunken Gardens. Holliday Park, just north of downtown, features its iconic sculpture, The Ruins. The Ruins were constructed from a previous sculpture that was set to be destroyed, and was repurposed in one of Indianapolis’s most distinctive art installations. However, The Ruins are truly in a state of ruin and are in desperate need of repair. Plans have already been formed and funds are being raised to revitalize the heart of Holliday Park in the near future.

So here’s my not-so-brief list of what I love about my city. I’ll never claim that it is perfect, but I will always love the opportunities it gives me. Hopefully, this list might convince you to go and give the city a try, even for just a day trip. There’s so much that Indianapolis has to offer that this article can’t even cover it all. As I write, I think of more things to include, but I’ll leave you with these ten. Indianapolis is nicknamed “The Crossroads of America,” and the diversity and opportunity it provides definitely help it live up to it’s name.
Report this Content
This article has not been reviewed by Odyssey HQ and solely reflects the ideas and opinions of the creator.