10 Things that happened during my two week vacation in europe

I can't wait to go back. 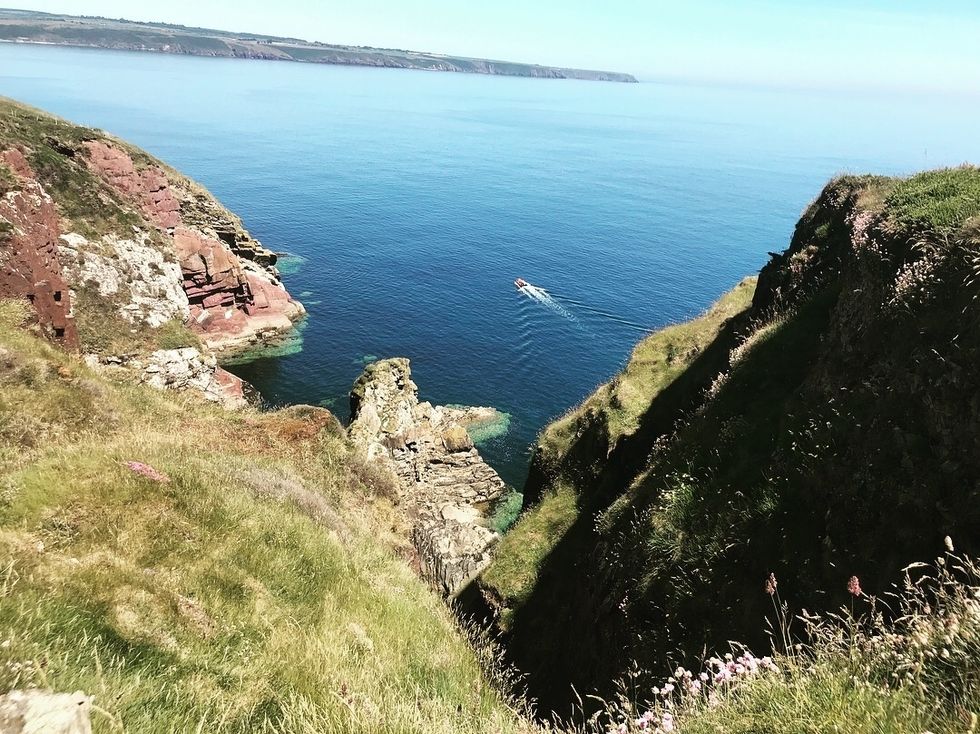 I spent the past two weeks in Ireland and four days in England. I have never really traveled outside of the country before (save for when I was really young and therefore I can't remember it well), so this was such a new experience for me. Needless to say, I had the TIME of my life and experienced so many new things and cannot wait to go back and explore even more new areas of the world! Here are some of the best/funniest things to have happened to me:

If you've read any of my past articles, you know that everyone in my family is a HUGE Harry Potter fan. My sister, Ciara, and I, traveled to London just to check out the Harry Potter Studio Tour. COOLEST. THING. EVER. Our tour guide told us it would take us about three hours, and we highly doubted that we would need this long, but boy were we WRONG. This was where they actually filmed all the movies- they had everything there, from 4 Privet Drive, to all of Umbridge's declarations hanging on a wall, to a room-size diorama of the Hogwarts castle. It was by far the coolest Harry Potter-themed place I have ever seen in my entire life.

4 Privet Drive when all Harry's acceptance letters were falling.Personal

My cousins own a farm in Moneygall (yes, this is where Obama's ancestors are from), so we went down for the day to visit them. I am not much of a farm girl, but I was very excited, albeit a little apprehensive, to go out with them to feed the cows with them. However, while the cows were eating at their troughs, my younger cousin pet a cow and startled it. The cow freaked out, tried to run, fell in a pile of cow s**t, which proceeded to hit me smack in the chest.

My dad even managed to get it on VIDEO.

The cows on my cousin's farm.Personal

3. Drove a tractor for my first time.

While also down at my cousin's farm, her son taught my sister and me to drive a tractor. Reiterating the fact that I am NOT a farm girl, I was terrified driving something while sitting so high up, but it ended up not being as horrifying as I thought, and I actually managed to drive it around without crashing!

I, unfortunately, did not take any pictures while driving the tractor, mainly because I was scared out of my mind!

My sister and I were in London for four days, and we tried to see just about all there was to see. We rode the London Eye, visited the Tate Museum of Art, and saw Westminster, Buckingham Palace, the London Tower, the Tower Bridge, and the London Bridge. Unfortunately, Big Ben was under construction.

America's version of "old" is 200 years old; in Europe, there are monuments over 500 years old. WILD.

My sister, Ciara, and I on the London Eye.Personal

OVERRATED AND NOT WORTH A WAIT. We went to the Long Room after, which is the library above the Book of Kells, and it literally looked like a library straight out of Hogwarts.

In Europe, the drinking age is 18, so I was able to go to pubs with my cousins and order from the bar LEGALLY. Although my dad was less than thrilled about my legal status, my cousins kept giving me drinks while he wasn't looking (sorry Dad).

My cousin, Leanne, and I at McSorley's Bar in Dublin.Personal

My grandfather was one of fourteen children, so my dad grew up with over sixty first cousins. For me, this lead to meeting so many new family members, many of which I didn't even know existed. They live all over the country and even out of the country, many as far away as Australia and New Zealand. My sister and I even got to meet up with my cousin that lives in London!

My cousin, Deidre, Ciara, and I, at a pub in London.Personal

On my last day, my dad's brother and his family brought my sister and I to climb Sugarloaf Mountain. The view from the top- indescribable.

My family and I after we climbed to the top of the mountain.Personal

9. Learned how easily traveling in Europe is.

View from the London EyePersonal

10. Watched my sister graduate from college.

When we were younger, my sister used to pull a ton of pranks on me, from telling me I was adopted to convincing me that the whole she had kicked in the ceiling was actually a hole that ghosts from the attic came out from. Her most memorable prank, however, was when she pretended to be possessed by a spirit from the future named Zarmania. "Zarmania" later on wrote me a letter, describing what all of our lives would be like in the future, including our careers, and what our kids would be named. She predicted that she would be a doctor, a career that she had been talking about since she could speak.

Last week, I watched her as she accepted her diploma from medical school at Trinity College, Dublin.

I couldn't even begin to describe how proud I was of her; after working so hard for five years in college, and studying for 12 hours every day with minimal breaks, she had graduated in the top 10 of her class and gotten her dream job. She had succeeded, and being there to watch it happen made me so beyond happy.

My sister, Ciara, and I at her graduation from Trinity College.Personal