10 Reasons to Read Winnie-the-Pooh as a Grown Up
Odyssey
CurrentlySwoonLifestyleHealth & WellnessStudent LifeContent InspirationEntertainmentPolitics and ActivismSportsAdulting
About usAdvertiseTermsPrivacyDMCAContact us
® 2023 ODYSSEY
Welcome back
Sign in to comment to your favorite stories, participate in your community and interact with your friends
or
LOG IN WITH FACEBOOK
No account? Create one
Start writing a post
Entertainment

10 Reasons to Read Winnie-the-Pooh as a Grown Up

Find your "thotful" spot and rediscover the 100 Aker Wood 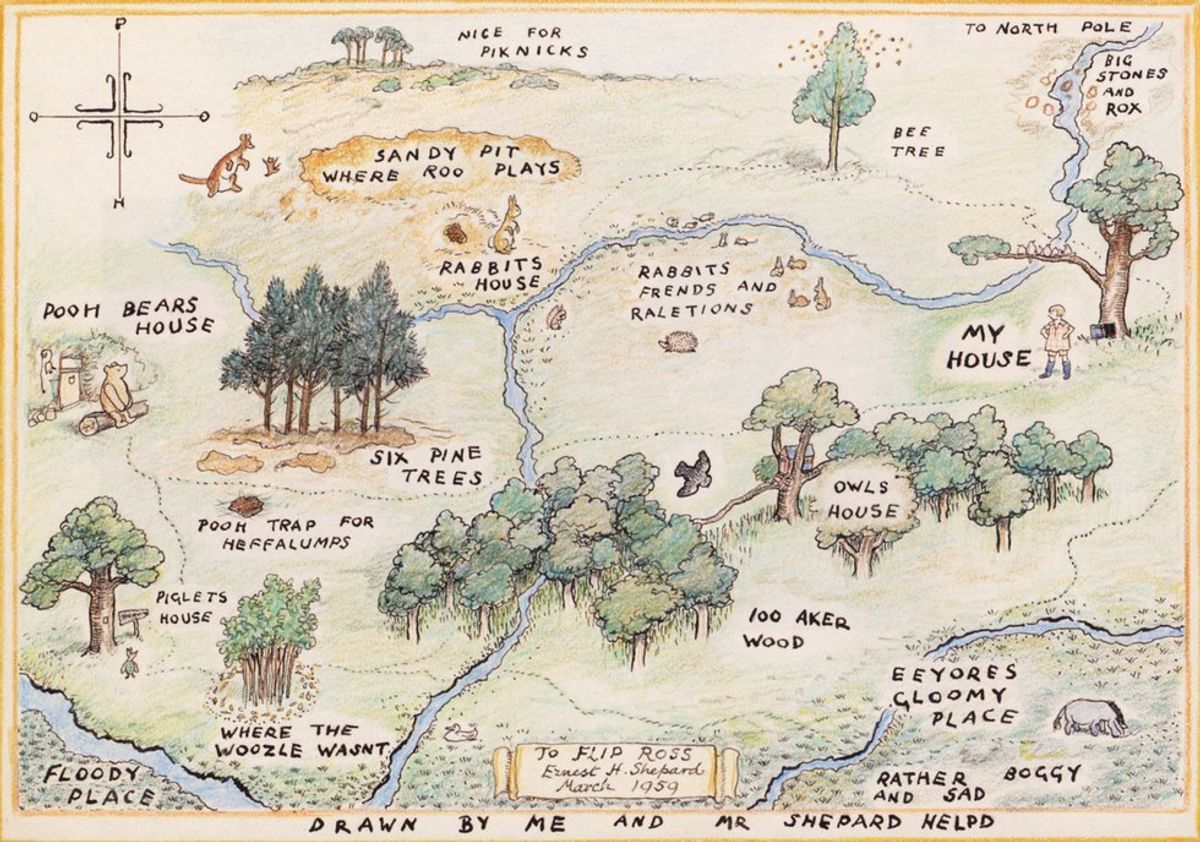 I think it's safe to say every Westerner (or not, I don't know) alive today had their share of Winnie-the-Pooh during childhood. He's everywhere, in tons of different movies and TV-shows, plus adapted short-stories. Piglet, Rabbit, Tigger, Owl, Eeyore, Kanga, and Roo are all alive in our imagination. What doesn't happen very often, though, is for people to go after the original sources, the books by A. A. Milne. As the headline suggests, I consider it a huge mistake, for they're wonderful. I'm not saying that they're fun for all ages, but they can be, as long as you've kept that little sparkle which glittered with joy every time Pooh sang his theme song inside yourself. To read A. A. Milne requires a bit of effort, it requires you to forget your worries for a moment, turn into a child again, and immerse in this universe of complete and marvelous nonsensicalness. If you can do it, I assure you, the knowledge you have as a grown up will allow this experience to be even more magical than when you were a child, for no joke will be lost and the craziness will be immediately understood as craziness. Not sure what to expect? Here are 10 examples:

A. A. Milne begins every book with a dedication for his wife, which are heart-melting and kind of give the impression that the author's a widow, but she actually outlived him.

The stories are written as if Milne was telling them to Christopher Robin at this exact moment, and so some unexpected answers for expected questions might appear. Pooh, for once, lives under the name of Sanders because "he had the name over the door in golden letters and lived under it".

Capital letters are just thrown in the middle of the stories, giving a broader sense to things we wouldn't usually consider, and showing what exactly is given importance in the 100 Aker Wood.

4) Sense follows the rules of Christopher Robin, a 4-year-old

Winnie is a girl's name, but the use of ther makes it acceptable as a boy's one (for all the people who wondered about Pooh's gender).

You never can tell with bees. I can't stress how important this is.

Just picture for one moment Christopher Robin walking around using his best Deceivable Voice and the bees being Confused by it. How can it not make you Laugh?

He didn't say it aloud, but you can imagine how full his voice would've been. Their friendship is such a special one, and the last chapter from The House at Pooh Corner would bring even Stannis Baratheon to tears (this was an Out of Place Reference but I'm sure you got the idea).

Pooh's songs are everywhere, and you can't help but try to find a tune for them and sing it to yourself. They're of as much quality as Sméagol's song at the Forbidden Pool, and that is a quality song.

9) This all was just the on the first chapter

By the time you're finished, you'll wish you had a Trespassers W broken board in front of your house, and will be teary-eyed upon the vision of the real stuffed-animals that we all love so deeply.

I believe there's only one more thing I can say: "Sing Ho! for the life of a Bear!"

After these books, it's the One Absolute Truth.