"I would have been sure to research my own jam preferences before impersonating myself." 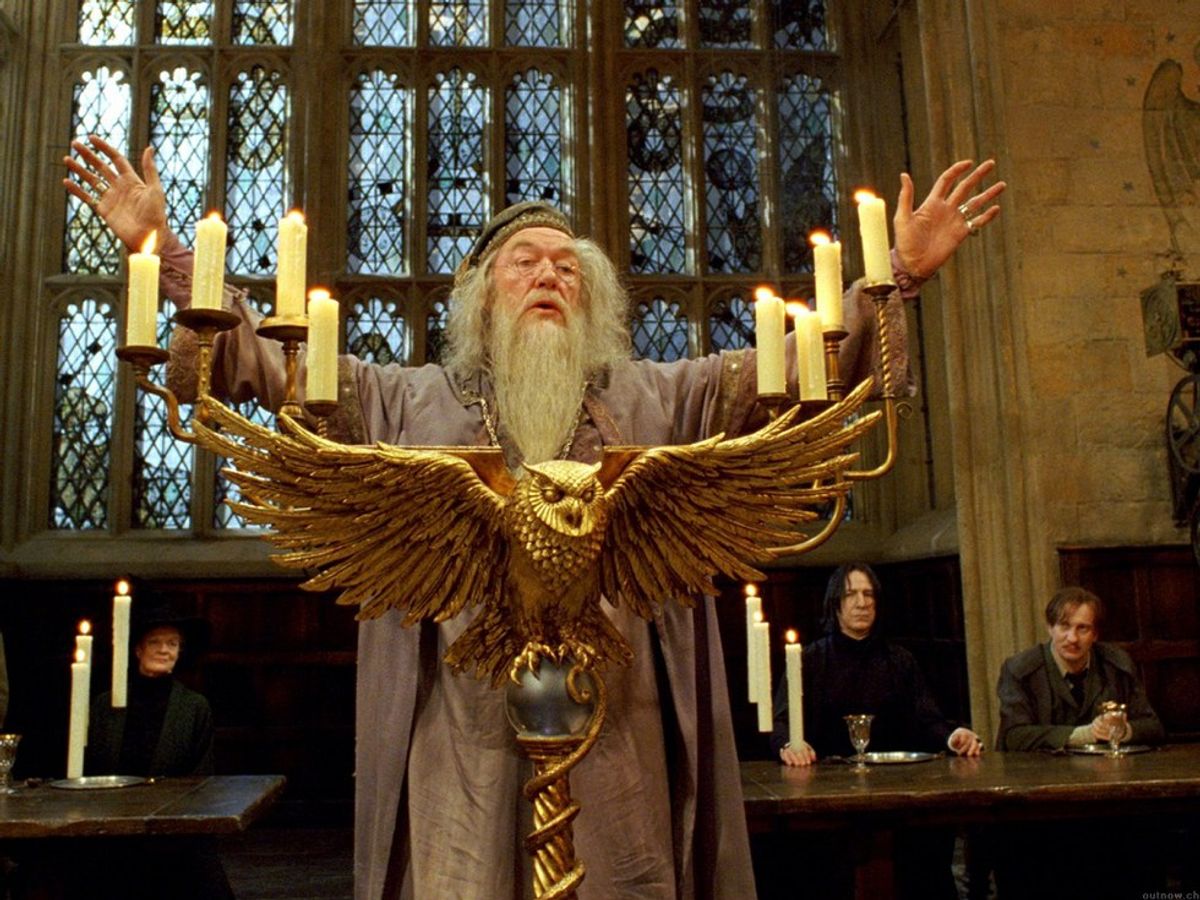 To continue celebrating Pride Month, let’s honor one of the most magical and courageous men in the fictional universe, who happens to be gay. I’m talking, of course, about Albus Dumbledore.

Albus Percival Wulfric Brian Dumbledore, born in 1881, started off as a Transfiguration teacher at Hogwarts School of Witchcraft and Wizardry, and later became the Headmaster when Harry Potter came in to start trouble.

In 2007, the author of the "Harry Potter" series, J.K. Rowling, announced that Dumbledore was gay. At this time, the seventh and final book, "Harry Potter and the Deathly Hallows," had already been released (and the fifth movie, "Order of the Phoenix," had also come out). There was a lot of controversy surrounding this announcement. A lot of people complained that it was never mentioned in the books, but in my opinion, the books were written from the perspective of an 11-year-old up to 17-year-old boy - when and why would Dumbledore ever say “Oh, by the way, I like men?" Other people said, “He doesn’t act gay," but what they really mean in that they don’t think that he falls into the stereotype assigned to gay men, and my response to that is "... really?" He was specifically described as “flamboyant," he wore rainbow robes and liked to talk about his knitting.

But that’s beside the point.

I personally would’ve loved if Rowling had thrown in the fact that he was gay once in the beginning and never mentioned it again. I say this because the majority of the books came out when I was in elementary school (a Catholic elementary school, mind you) and I didn’t even know that gay people existed. The first time I was exposed to people who were LGBTQ+ was when I went to public school as a 13-year-old, and the first time I knew that sexualities beyond the L, G and B existed was in high school. If, at a young age, I knew that Dumbledore was gay, it would’ve been incredibly beneficial to me as a seven-year-old learning about the world. If it were only mentioned once in the beginning, it would have made the point that a person is not defined by their sexuality. Dumbledore was a genius, a badass, a weirdo and and a bit of a manipulator, and that is what defines him. Not the fact that he was gay.

Dumbledore was always known to have great one-liners, such as, “Nitwit! Blubber! Oddment! Tweak!” and, “If I were a Death Eater, I would have been sure to research my own jam preferences before impersonating myself." He was known for being whimsical, eating candy and humming to himself. His last name, “Dumbledore," actually means “bumblebee," because J.K. Rowling enjoyed the idea of him flitting around Hogwarts like a bee and humming.

But, despite his inherent silliness, Dumbledore lived for approximately 115 years, and he knew a s**t ton about life. Instead of silly posters of cats that say “Hang In There!” hanging on the walls to inspire you, there should be posters with things that Dumbledore says, because Dumbledore knows what’s up!

Here are 10 things that Dumbledore has said that teach you more about life than any teacher or class ever could.

1. “Of course it is happening inside your head, Harry, but why on earth should that mean that it is not real?” - "Harry Potter and the Deathly Hallows."

2. “But you know, happiness can be found even in the darkest of times, if one only remembers to turn on the light.” - "Harry Potter and the Prisoner of Azkaban."

3. “Words are, in my not-so-humble opinion, our most inexhaustible source of magic.” - "Harry Potter and the Sorcerer’s Stone."

4. “It is our choices, Harry, that show what we truly are, far more than our abilities.” - "Harry Potter and the Chamber of Secrets."

5. “It is the unknown we fear when we look upon death and darkness, nothing more.” - "Harry Potter and the Half-Blood Prince."

6. “People find it far easier to forgive others for being wrong than being right.” - "Harry Potter and the Half-Blood Prince."

7. “Age is foolish and forgetful when it underestimates youth.” - "Harry Potter and the Half-Blood Prince.

8. “Indifference and neglect often do much more damage than outright dislike.” - "Harry Potter and the Order of the Phoenix."

9. “It is a curious thing, but perhaps those who are best suited to power are those who have never sought it. Those who have leadership thrust upon them, and take up the mantle because they must, and find to their own surprise that they wear it well.” - "Harry Potter and the Deathly Hallows."

10. “Do not pity the dead, Harry. Pity the living, and, above all those who live without love.” - "Harry Potter and the Deathly Hallows."

So shout out to J.K. Rowling for writing a wonderful character (and wonderful book series) that inspires people daily to live their lives with love and not take things too seriously.

Happy Pride Month!
Report this Content
This article has not been reviewed by Odyssey HQ and solely reflects the ideas and opinions of the creator.