Why You Should Elect Scrooge McDuck For President
Odyssey

Why You Should Elect Scrooge McDuck For President 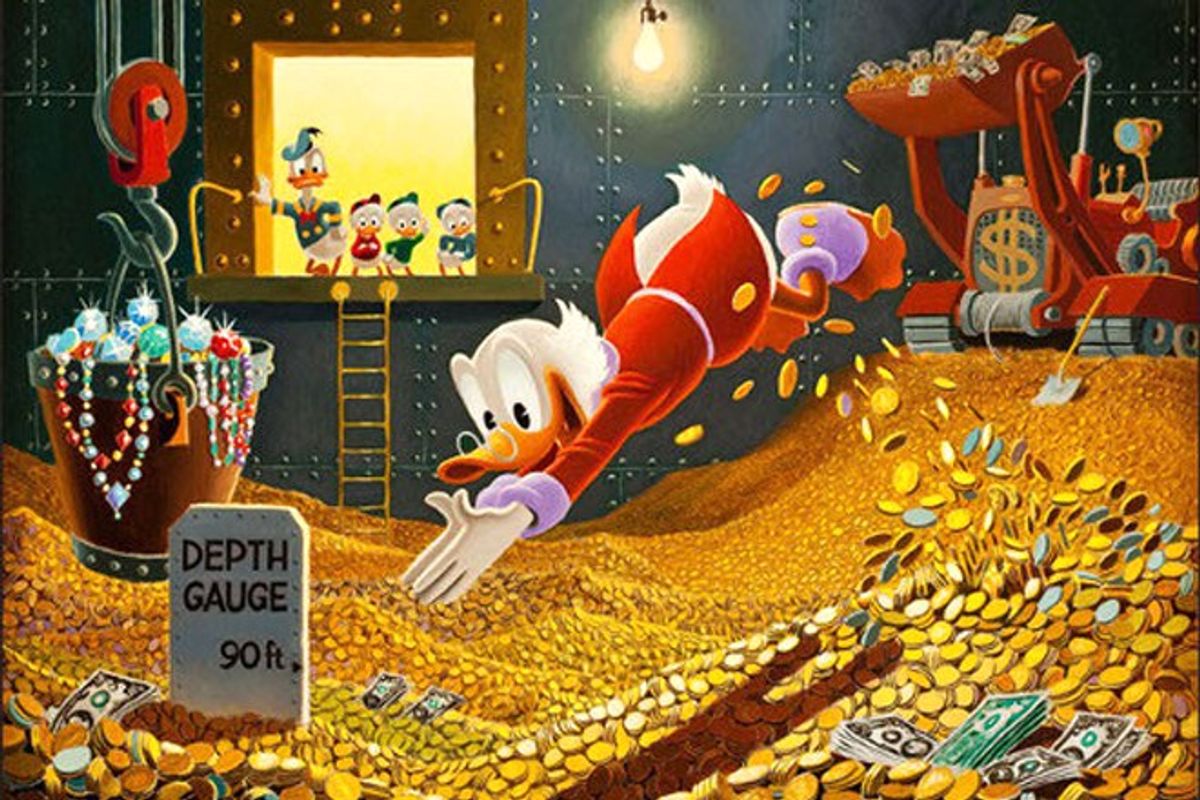 It's a tumultuous time for our nation. We, the American people, stand at a crossroad. The 2016 presidential election has, in every sense of the word, become a three-ringed circus with multiple ringmasters and carnival barkers screaming into our faces at every turn. There seems to be few chances for anything new in this election, as we are given choices that range from less than desirable to outright lunacy.

Undoubtedly many of us wish for an alternative, and while many have been suggested, few have caught on. I am here today to tell you, my fellow Americans, that I have found the new voice of the people. He is the very paradigm of American success. He has been at the top of Forbes magazine’s top richest list; he has experience in almost every field of business and philanthropy; he has traveled the world (and off world as well); and has the most swimmable fortune in the world. I speak of course, of Scrooge McDuck.

Before I make my case, let us address the elephant in the room. Scrooge McDuck is a Scotland native -- in 2007, the city of Glasgow officially claimed him as a native -- so you may ask, how could he, as a foreign immigrant, possibly be eligible for the office of president? It is a fair question, but one that I think is quite simple. While he may be from Scotland, McDuck's creators were Carl Barks, one of the greatest American cartoonists. Therefore, by way of descent, McDuck is an American citizen, qualifying him for the presidency.

McDuck was born in 1947 - some of you stickler Scrooge fans may point out that according to the timeline in "The Life and Times of Scrooge McDuck" by Don Rosa, McDuck was born in 1867 and died in 1967, but I will remind you that that is an unofficial timeline, and that McDuck has been shown to be alive and healthy today in current comics. McDuck began a life of success with a shoeshine business at the age of 10 and went on to form the great McDuck empire. The exact worth of the McDuck fortune is debatable, but has been calculated to be one multiplujillion, nine obsquatumatillion, six hundred twenty-three dollars and sixty-two cents.

But to simply say that Scrooge McDuck is a great businessman would be to do him a disservice. McDuck's legacy of venture capitalism is a modern marvel. He has invested in almost every kind of industry and has a financial presence in almost every country. McDuck's experience lies not only in business, but in foreign relations as well. Though his history with certain African nations has been problematic in the past, these past skirmishes have been smoothed out. McDuck has gathered treasure from all over the globe, giving to museums in exchange for being treated to a nice tax break.

McDuck's true value as a president lies in his personal philosophy on life. McDuck believes in the American dream - he's lived it. He began shining shoes and went on to find the treasures and magical artifacts of the world. Hard work and motivation are the keys to his success. This, in addition to some manipulation, but that is the reality of the world we live in. Can we fault a duck for simply seizing opportunities? We should celebrate shrewdness, not condemn it. Maybe McDuck did chase those natives off their land. The best rubber plantations require sacrifice. We all have our faults, and McDuck has certainly made mistakes. But does that negate the time he stopped Dr. Nogood from destroying all the money in the world?

Some may question McDuck's experience in matters of defense. But one need only look at his handling of such lowly thieves like the dreaded Beagle Boys, whose many attempts to steal McDuck's riches, whether through the use of contraptions such as giant magnets, to dream manipulation, have all been thwarted thanks to the brilliant tactics of McDuck. Compared to the power wielded by the Beagle Boys, McDuck should have no problem handling ISIS and his experience in thwarting ridiculous schemes makes him ideal for dealing with North Korea. When McDuck's gold nugget was stolen, he fought off 19 thugs all by himself. But McDuck is also a shrewd negotiator, having negotiated with kings, wizards, mad scientists, magical genies and aliens. How many aliens has Hillary Clinton negotiated with? How many magical genies has Donald Trump negotiated with? None.

McDuck's personal philosophy is one of self-preservation and personal responsibility. His financial strategy is often called "penny pinching," but with a deficit at an all time high, isn't that what we need? McDuck has created millions of jobs through his various businesses and has shown a true talent for job growth. McDuck can teach an entirely new generation the art of lifting yourself by your bootstraps. Our children will be inspired to rebuild America by raiding ancient tombs, building giant robots and keeping their money physically, never in a bank - just like our future greatest president.

Yet even with all this, many may wonder how a duck with no previous political experience could possibly serve on the executive branch of the United States? Because he is the true outsider. He has seen the world and saved it many times. McDuck was even friends with one of our most beloved presidents, Theodore Roosevelt! McDuck has foiled the plans of his enemies on multiple occasions, pioneered new technology and solved more ancient mysteries of history than any archeologist could dream. He is a true renaissance duck.

This November, don't just settle for what our two-party system tells us are our only choices. Exercise your right as an intelligent American and choose to vote for a candidate who is truly worthy of being the leader of the free world. We stand at an important time in history. There is too much at stake not to make your voice heard. So vote for Scrooge McDuck. Not just because he is an economic genius; not only for his years of foreign policy experience and not just because of his achievements. Vote for Scrooge McDuck because you know, deep within your heart that it's the right thing to do. This is the time to make our stand. To say no to same old song and dance from Washington. Now is the time for our first duck president. Vote for Scrooge McDuck. Let's make America "Woo-hoo" again!

And for a running mate, may I suggest Gizmo Duck?