Why You Need "Dear Evan Hansen" In Your Life
Odyssey
CurrentlySwoonLifestyleHealth & WellnessStudent LifeContent InspirationEntertainmentPolitics and ActivismSportsAdulting
About usAdvertiseTermsPrivacyDMCAContact us
® 2023 ODYSSEY
Welcome back
Sign in to comment to your favorite stories, participate in your community and interact with your friends
or
LOG IN WITH FACEBOOK
No account? Create one
Start writing a post
Entertainment

Why You Need "Dear Evan Hansen" In Your Life 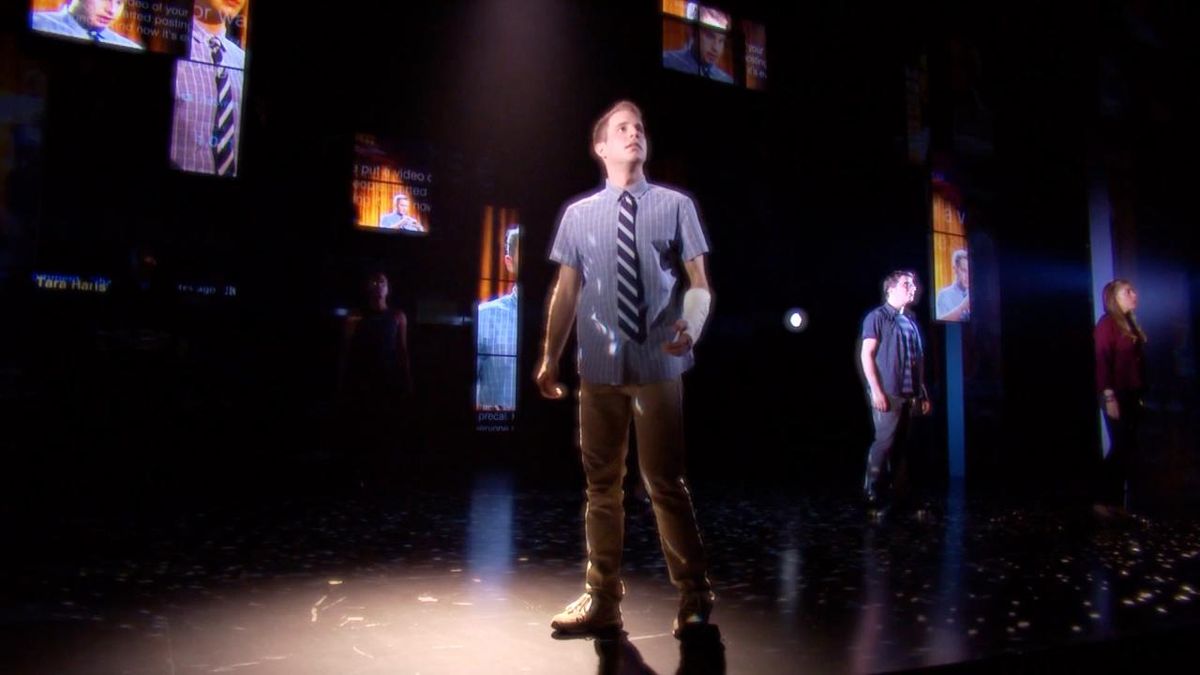 We need to talk about Dear Evan Hansen, because here's the deal: it's a damn masterpiece.

But, it's also really important. It's important for many reasons. It's a cathartic heart-breaker of a musical about a young man named Evan Hansen who fakes a friendship with a fellow student, Conner, after that student commits suicide. That's all very important: the idea that someone feels so alone in the world that they have to commit suicide, the fact that Evan fakes a friendship with Conner to bring his family together, and the show also deals with how we all deal with grief, which is all very important and beautiful and wonderful that it's in a musical.

However, the reason I truly love this show (and bear in mind that I merely listen to the cast recording a lot and watched a bootleg on YouTube) is because Ben Platt, the young actor who played Benji in Pitch Perfect, plays Evan Hansen's severe social anxiety with such a delicate reality that I cannot get through some of the songs without crying.

To preface: I usually despise shows about teenagers and, more specifically teenage angst. I honestly just get irritated and bored. So, when I saw early information about Dear Evan Hansen online, I didn't immediately hate it, but I was like, 'oh, that probably won't be something I'll enjoy a lot'. However, I do like the late night television show, Late Night with Seth Meyers and, while the show was still in previews on Broadway, Ben Platt performed "Waving Through a Window" from the show. My mind was blown. Those lyrics and that performance, particularly, struck a chord in my soul. That sounds uber-corny, but I'm super serious: without being overdramatic, Ben Platt has accurately depicted an anxiety disorder. He hyperventilates, he cries, he shakes, and he shuts down and even worse, Evan Hansen hates himself for this.

In the song "Words Fail", Evan sings: "I never let them see the worst of me. 'Cause what if everyone saw? What if everyone knew? Would they like what they saw, or would they hate it, too?"

One of the most difficult things to explain to people about anxiety is what it can do to your self-esteem. For my part, my anxiety takes its toll on my nervous system by berating my mind with any possible thing someone could hate about me. On good days, it's simple things like my tendency to be loud, repeat myself, and how I sometimes get too nasally while speaking. On bad days, it's everything; it could be my weight, my hair color, my nose, how much space I take up in the world. The greatest part about, even at 21, being around for the creation of something like Dear Evan Hansen is that finally there is a show where there is a character suffering from similar issues to myself. A big theme in the show is shown through the song "You Will Be Found". Because no matter what your anxiety or your depression or the rest of the world tells you, you deserve to be here. It also shows us that it's important to let people know, no matter what, that we are all here for a reason.

I know that all anxiety disorders can manifest themselves in a million different ways and yours might be different from the one represented in this musical and I know musicals aren't everyone's cup of tea, but all I know is that this show made me feel found.

QueenRadhi
The State University of New York at Stony Brook
2964