White People, Please Don't Paint A Sugar Skull On Your Face This Halloween

White People, Please Don't Paint A Sugar Skull On Your Face This Halloween

Latin people have good reason to be offended. 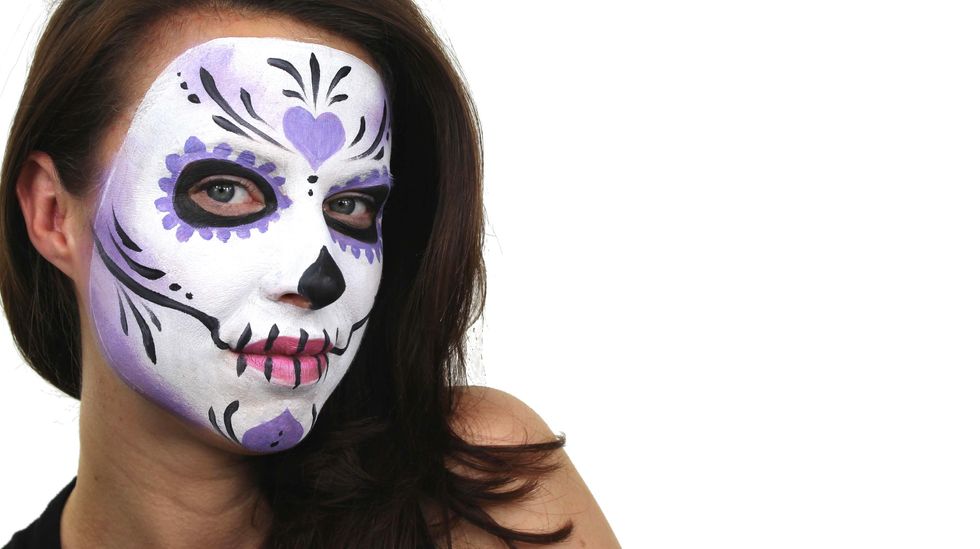 Halloween is a lovely commercial holiday for adults to dress up in provocative costumes.

Often, it's another excuse for college students to party, and also an excuse for children to consume metric tons of candy that will likely contribute to the ongoing obesity epidemic in America.

Personally, I love to finally have a non-judgmental day to wear "Star Wars" apparel and swing around toy lightsabers like my inner 10-year old is always wanting to do.

But meanwhile south of the border from Mexico all the way to Bolivia, Latin peoples and indigenous peoples have our Dia de los Muertos, or Day of the Dead for those of you who don't speak Spanish.

But let me make this clear -- in no way can this sacred celebration of our ancestors be compared to Halloween without drawing negative connotations.

I know some of you may wonder, "Why do so many Latin call out white people for 'cultural appropriation'?

"Why should I as a white person, care?

"Aren't I honoring your culture?"

If you read on, I'll answer those questions, but first, let me illustrate by giving a brief life story.

As a white male of indigenous and Latin descent growing up in the American South, far from the graves of my father's family, Dia de Los Muertos was never accessible to me.

I grew up hearing stories of Guatemala's rolling green mountains and humid jungle, of my grandparents who worked for the rights of mestizos and other indigenous citizens often treated as second-class citizens.

I even managed to visit a few times with my parents to see some of my cousins and aunts and uncles. But to my shame, I never asked my dad about the Day of the Dead until last October when Guillermo del Toro's colorful masterpiece "The Book of Life" premiered in my local theater.

Intrigued by the reviews and the fact that del Toro was directing (Go watch "Pan's Labyrinth" sometime and you'll see why I was excited about del Toro), I watched the film in a newly furnished theater in Greenville, South Carolina, with only one other family to accompany me.

Nobody would say the film performed poorly at the box office, but most savvy moviegoers noticed its absence at the Oscars that year.

I couldn't help but find this infuriating.

Why had I never thought about Dia de Los Muertos?

Why did seemingly no one care in America?

Why had my father not told me that we celebrate life and death every year in Guatemala?

My abuela had passed away somewhat recently, and I remember my dad sobbing as he knew he would never see her again. She'd never really been a large physical presence in my life as I only knew my grandmother a short few years, (she did visit the States once, and our time together was magical) and I didn't speak any Spanish until late in high school.

Watching that film, I felt as though perhaps I could one day meet my grandparents again, even Abuelo Herminio whose only memory I have is the name my parents gave me. Maybe, on just one day of the year, I could meet them not as their son's white baby, but a full-grown Guatemalan young man who wished to learn about our culture. I, the living, could find lost family in death.

But I know why people did not watch "The Book of Life." Perhaps it will do better on cable in 30 years, but for now, whites remain a majority of Americans, and likely the largest demographic at the box office as well. But this event last year is not the heart of the problem.

I feel a great sadness, disconnected from the heritage that my father left behind in Guatemala in hopes of creating a better life for his family. I feel longing, as I haven't yet had a chance to visit my family's graves, nor taste the delicious fiambre my Tia Lusmi makes every year, or dance and sing with my neighbors in Antigua and San Miguel Duenas.

But more than anything else, I feel so angry at everyone, particularly other non-Latin whites, who appropriate and take for their own my people's culture by parading around drunk on King Street with poorly painted fake sugar skulls.

Can you all not see that you are desecrating the memory of my grandparents?

Of my family and the loved ones we have lost to war, economic enslavement, oppression, and colonialism?

I know that a lot of people don't really know all this. I understand why Dia de Los Muertos might be attractive to someone whose culture has been swallowed up by a pervasive and destructive social construct known as "whiteness," that the idea of finding life in death, finding a connection where it was lost, holds a lot of hope and spiritual connection.

But please, see it from my eyes, someone who shares your privilege, but also someone caught between two "worlds." See it through the eyes of someone who wants to meet their grandparents again.

When we take on cultures as costumes, we take away its meaning, just as our colonial ancestors once did. Where you see a colorful and "exotic" costume in Dia de Los Muertos on your face in the mirror, I see a continuing history of racism and fetishization.

I leave you with this thought- next time your non-Latin friend wants to co-opt an indigenous holiday, show them this article, along with all the links I've provided. Hopefully, they'll understand why this is so important.