When You Give A Girl A Brother
Odyssey
CurrentlySwoonLifestyleHealth & WellnessStudent LifeContent InspirationEntertainmentPolitics and ActivismSportsAdulting
About usAdvertiseTermsPrivacyDMCAContact us
® 2023 ODYSSEY
Welcome back
Sign in to comment to your favorite stories, participate in your community and interact with your friends
or
LOG IN WITH FACEBOOK
No account? Create one
Start writing a post
popular

When You Give A Girl A Brother

"No, you cannot exchange him for a baby sister" 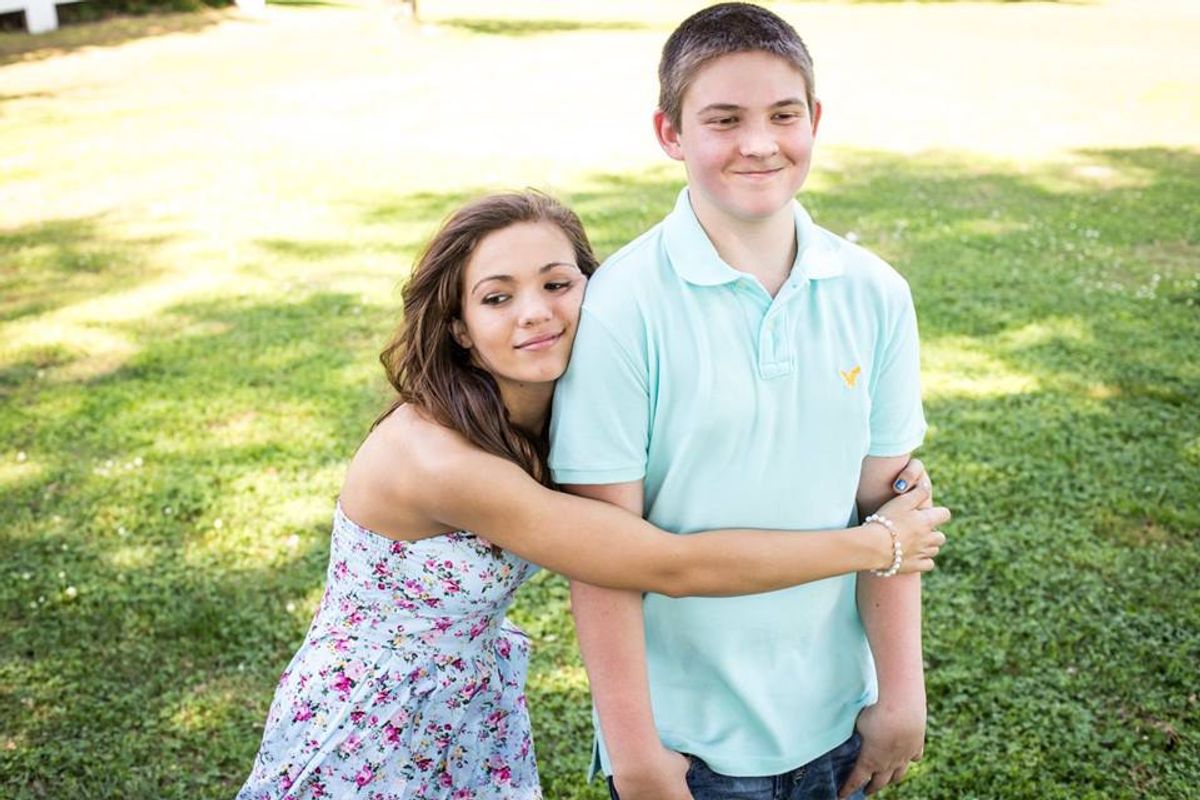 When you give a girl a brother, at first she'll probably cry and ask her parents to exchange him for a baby sister.


When she learns that this is not possible, she'll cave and take him under her wing.

She'll coach him from crawling, to walking to sprinting in no time.

Then she'll teach him the best places to hide for a thrilling game of hide and seek, stuffing him under beds and shutting him in toy boxes.

She'll share her creepiest stories, illuminated by the flickering of her Barbie flashlight in a tent for two in the living room floor.

She'll squeal in delight as she chases him through backyard sprinklers, daring him to run through the freezing water in the summer heat.

She'll taunt him as the two stand back to back, insisting that she must be "1,000" inches taller than him, because bigger sisters are just that: bigger.

She'll tattle when he pulls her by her hair from the couch or takes her favorite toy, sure that Mom will bring justice to the cruel, cruel rein of younger brothers.

She'll teach him all about school, helping him pick his first backpack and suggesting the best color pencils.

She'll find herself defending him against the school bus bullies with her fiery personality, (even though he insists that he can handle it and it's sooooo embarrassing when his sister is threatening to beat up boys for him)

She'll spend her afternoons insisting that her homework is much, much harder than his "baby" spelling words, because she's learning her multiplication facts.

Over time she won't seem to notice that their backyard adventures have been replaced with "No Boys Allowed" or "No Girls Allowed" signs on their bedroom doors.

She'll soon be annoyed when her mom insists that she has to bring her little brother to the high school basketball game.

She'll call her friends insisting that her middle school brother is so obnoxious with his high pitched voice and his sad attempt to grow armpit hair.

She'll complain and call him disgusting when he doesn't flush or a brat takes too long in the bathroom in the mornings.

She'll bribe him with fast food so that he doesn't tell mom that he heard her on the phone all night with some boy past curfew.

She'll still insist that her algebra homework is so much harder than his freshman English class (because that's so ninth grade).

She'll tell him to go away as she cries alone in her room, because she doesn't have a date for Homecoming. But he'll wait patiently outside the door with the dress shirt and pants that he bought to be her escort in her time of need.

Time will pass, and she'll begin to see that the little brother who she once towered over, the one she saw walk for the first time, the baby who she was sure she wanted to trade, has been replaced with a man.

A man now towers nearly a foot above her head, voice booming with maturity, and driving his own car to high school basketball games.

A man who helps her move into her college dorm, trying to hit on her roommates, and later coaching her through her math homework via text messages from home.

A man who asks her for advice for his first dates, asking if his cologne is too strong or if his shoes match his outfits.

A man who defends her when the two of them are out and about, and some guy just won't leave her alone.

A man who now gives her advice about her life choices, with full honesty and wisdom beyond his own age.

A man who inspires her, teaches her, and challenges her.

Because even when she's no longer "1,000" feet taller, or he's too big to fit in the toy box anymore, when you give a girl her brother you've given her a best friend for life. A teacher, a protector, her savior, and her biggest pain. But regardless what time brings: the changes, the heartache, the success; he will always be there. When you give a girl a brother, you've given her the one of the most important men of her life... and although she may know know it at first, one day she will thank you.