What You Didn't Know About Leap Year
Odyssey
CurrentlySwoonLifestyleHealth & WellnessStudent LifeContent InspirationEntertainmentPolitics and ActivismSportsAdulting
About usAdvertiseTermsPrivacyDMCAContact us
® 2023 ODYSSEY
Welcome back
Sign in to comment to your favorite stories, participate in your community and interact with your friends
or
LOG IN WITH FACEBOOK
No account? Create one
Start writing a post
Politics and Activism

What You Didn't Know About Leap Year

That day everyone glances over. 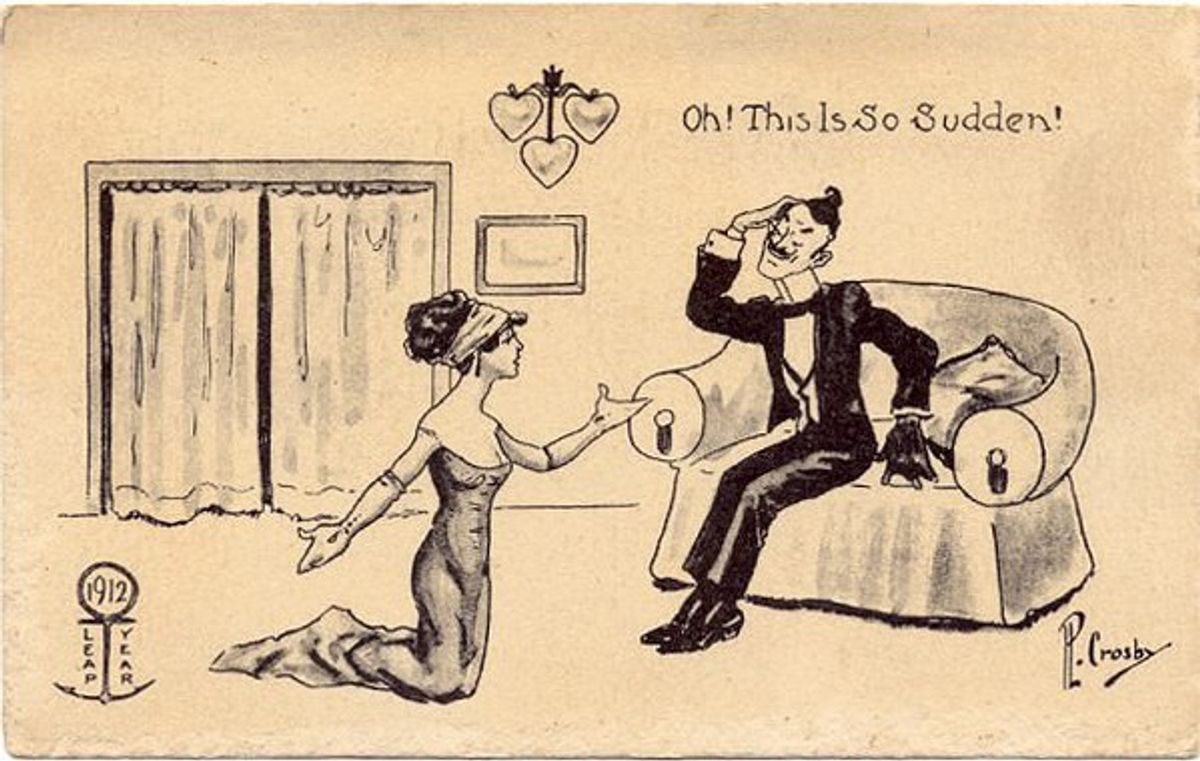 Leap Year. That thing that happens every four years where instead of the year being 365 days... it's 366 days!!! The month of February is generally one of the shortest months being 28 days. But when Leap Year rolls around, it is 29 days. Those lucky ones who are born in a leap year on February 29th either celebrate on February 28th or March 1st. All of this is common knowledge, but what do you not know about Leap Year? You're about to find out some pretty rad facts you never knew.

A long time ago in Ancient Egypt, some dudes were goofing around and figured out that something didn't exactly line up between the solar calendar and the man-made one. They realized that it takes the Earth 365 days, five hours, 48 minutes, and 46 seconds to travel around the some. All that extra change allotted for an extra day once every four years. Julius Caesar, everyone's favorite Roman dictator, added that year into the calendar.

Here's something we don't hear about much. A tradition of women proposing to men began in fifth century (500 BC) in Ireland. St. Bridget complained to St. Patrick about how women had to sit around and wait for male suitors to purpose. So he decided that on that one day, that comes around every four years, women can propose to men. Then he continued to reject St. Bridget's proposal and tried to calm her down with a fancy silk gown.

In the world, about 4 million people are born on February 29th. The likelihood that you will have a child born on February 29th is 1 in 1,461. Some famous people born in a leap year include rapper Ja Rule and actor Anthony Sabato Jr. Some people believe that Leap Year babies have special talents. On the other hand, Chinese believe that they are difficult to raise and unlucky.

4. Leap Year around the World

In Denmark, if a man refuses a woman's proposal he must give her 12 pairs of gloves. In Finland he must give her fabric for a skirt. In Greece, one in five couples believe it is bad luck to get married on a leap day. In Italy, they believe that women become erratic on that day and many proverbs tell people that the leap year is a "doom year." Russians believe that the leap year brings crazy weather patterns and more death. Scottish farmers think that leap years are bad for livestock and crops.

Anthony, Texas claims that they are the "Leap Year Capital of the World." They hold a festival from February 25th-29th that includes a trip to an Aztec Cave, fun at the horse farm and square dancing.

That was probably more than you ever thought you could know about Leap Year! Now on February 29th this year, you can have a great day and know all that pretty awesome stuff about the history of the day!

QueenRadhi
The State University of New York at Stony Brook
3519