"What Was She Wearing?"
Odyssey

"What Was She Wearing?" 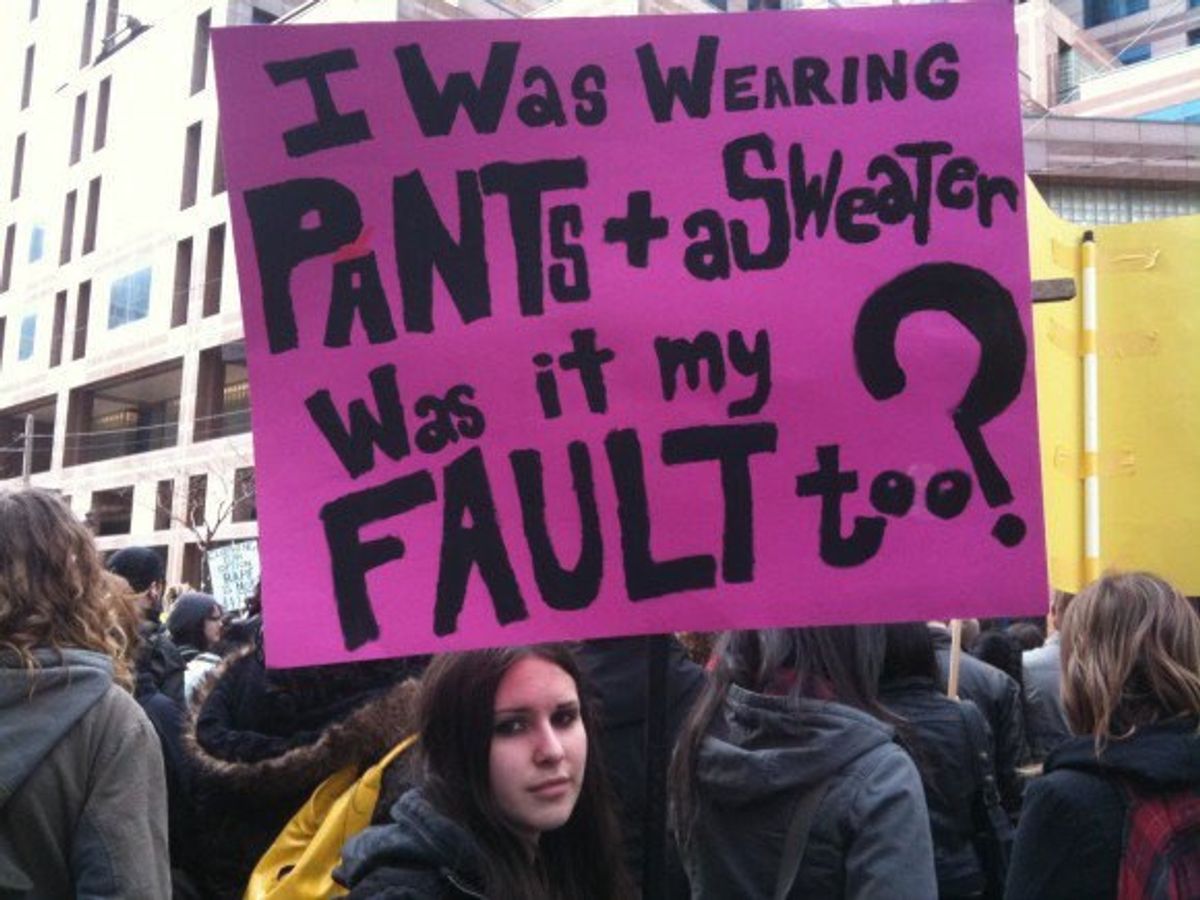 “What was she wearing?”

That’s the percentage of women in America who are sexually assaulted -- twenty percent.

And yet we still ask.

Do we really believe that what she was wearing made a difference? Do we think if she had worn something different, we wouldn’t still feel the glare of that twenty?

Because if what she was wearing mattered, we wouldn’t have a plethora of reports of assault in Middle Eastern countries where women are covered from head to wrist to ankle.

We wouldn’t have children coming forward, brave enough to speak up about what they’ve gone through.

We wouldn’t have incidents in the winter, reported by women who were bundled up in the cold.

We have to stop slut shaming and using it as an excuse for sexual assault.

Nothing makes it okay: not how she was dressed, not her intoxication, not if she’d consented before. Rape is rape. It is among one of the most horrific atrocities that can be committed against another human being, and we can’t belittle it by discrediting survivors willing to come forward, letting their abusers off because “she was dressed provocatively, and therefore he couldn’t help himself”. The idea that a woman is responsible for something so intrusive and emotionally painful happening to her because an extra inch of skin showed is downright disgusting of us as a society.

Could you approach a woman, assaulted and suffering from post-traumatic stress disorder (since one-third of sexual assault victims do suffer from PTSD, and rape is the leading cause of the disorder), and tell her that it was her fault? That the day she has nightmares about, the worst day of her life, was her fault, because she didn’t dress the way you would have advised her to?

And women, could you say you’ve never worn anything revealing, and that if you had you would have ‘deserved’ to go through the same ordeal?

Men, could you say the same? Could you claim that the assault was warranted on your mother, your sister, your daughter, your best friend, because of what she was wearing? Think about it, at the end of the day, it doesn’t matter if she’s your family, it matters that she’s a person--could you legitimately believe that about another person?

Could any of you honestly say that you think every woman included in that twenty brought the terror on themselves because of their clothing?

No one “deserves” to be assaulted, no rape is excusable or omittable, and no woman is “asking for it”. Quite frankly, they’re asking men to stop.

Furthermore, the excuse that men can’t control themselves around women dressed like “sluts” is degrading and offending to me on behalf of men. Several of my best friends are guys, and I respect them immensely. I believe that they’re intelligent, they’re strong willed, they’re respectful, and they are capable of self control.

For a moment now, we’ll pretend like a woman doesn’t have the right to her own body and to adorn it how she chooses: let’s say a woman is in public, in an outfit that is deemed “too scandalous” and “inappropriate”. Our men -- our brothers, fathers, coworkers, friends, boyfriends, husbands, uncles, world leaders--they can build skyscrapers, lead armies into battle, and perform life saving operations, but they can’t restrain themselves from violating her? I don’t believe that for a second. Our men are more than capable of anything they put their minds to, just like our women.

Where any other crime is concerned, we place the blame on the wrongdoer. We don’t claim that abducted children should have looked less vulnerable and more mature, we search together and criticize the awful kidnapper. We don’t say that the victims of serial killers should have fit the profile less, we mourn together and vow to avenge them. We can’t pronounce that sexual assault victims are at fault and give men less credit for their own self control than is due; sexual assault occurs all over the world, and happens to people of all ages, genders, races, occupations, and religions. We can all begin dressing as modestly as possible, and there will still be reports of every woman’s worst nightmare on the news every morning when you wake up. Changing our clothes won’t stop sexual assault. Changing our habits won’t stop sexual assault. The only thing that can help is living, breathing people to stop excusing it,to support the victims, to start holding the perpetrators accountable for their crimes, and to start fighting on behalf of the twenty percent.
Report this Content
This article has not been reviewed by Odyssey HQ and solely reflects the ideas and opinions of the creator.